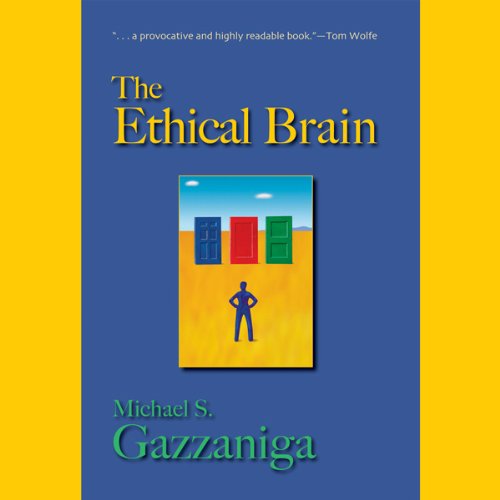 Will increased scientific understanding of our brains overturn our beliefs about moral and ethical behavior? How will increasingly powerful brain imaging technologies affect the ideas of privacy and of self-incrimination?

Such thought-provoking questions are rapidly emerging as new discoveries in neuroscience have raised difficult legal and ethical dilemmas. Michael Gazzaniga, widely considered to be the father of cognitive neuroscience, investigates with an expert eye some of these controversial and complex issues in The Ethical Brain.

The enjoyable, thought-provoking book will introduce readers to complex interplay between neuroscience and ethics. ( Science)
"None of the ideas are necessarily new in The Ethical Brain, but it is still an easy-to-read survey that treats the reader to an overview of the entire set of issues pertaining to morals and the brain." ( Science and Theology News)
"Gazzaniga eschews easy answers in exploring the potential and limits of neuroscience." ( USA Today)
"[ The Ethical Brain] does not address practical ethical questions that may confront clinicians in daily practice. Nevertheless, the strength...is the author's perspective as a neuroscientist, which will introduce the reader to complex aspects of neuroscience in relation to behavior society." ( Journal of the American Medica Association)
In The Ethical Brain, [Gazzaniga] does not shy away from taking on the loaded question...when does an embryo become a human being--"one of us"? His thoughtful discussion makes The Ethical Brain a worthwhile read." ( San Jose Mercury)
"Michael S. Gazzaniga takes an unflinching lok at the interface between neuroscience and ethics, and offers his own thoughtful perspective on some of the tough questions. ( Media Times Review Blog)
The Ethical Brain provides us with cautions--prominent among them that 'neuroscience will never find the brain correlate of responsibility, because that is something we ascribe to humans--to people--not to brains. It is a moral value we demand of our fellow, rule-following human beings.' This statement--coming as it does from so eminent a neuroscientist--is a cultural contirbution in itself." ( The New York Times)

While I don't agree with all of the author's conclusions, implied as they may be, I learned much from this book as a left brain. And while I am what would be called "pro-life," on the abortion issue, Dr. Gazzaniga presents the debate in a way that really forces one to think it through without emotion.

The question of when life begins, in terms of the brain is really out there. It's kind of like looking up at the stars on a clear night and wondering how it all began.

But the book covers many other aspects of the brain, behavior, and ethical implications which are well thought out and presented. If anybody thinks that George Bush was "anti-science" they should take a listen to this by a man who was appointed by Bush to his Council on Bioethics.

This book was so bad I had to switch it off after only 30 minutes because I got so frustrated I almost drove my car off the road while listening to it. It's philosophically unsound -- although the author claims to have much to say about ethics he clearly hasn't read much on the subject. His ideas on neurophilosophy are similarly unsound. Lots of unclarified assumptions and 'common sense' reasoning that doesn't help anyone. Bummer I bought it!

What disappointed you about The Ethical Brain?

The idea of ethics is to place before the student the ideas and scenarios where ethics are challenged. The guide in the adventure needs to challenge the student's beliefs. It is not for the guide to *guide* towards an irrefutable conclusion. Ethics are personal.Gazzaniga began well by identifying the topics and expanding on them. Then instead of a dispassionate argument, he dismisses my perspective and efforts his own as de facto. Listening to the book I kept waiting for the &quot;however...&quot; It never materialized. I listened to a third of the book, into several chapters hoping that his Ethical Brain would introduce a form of a discussion or argument.It seemed to me that his stances on stem cell research and abortion were misunderstood by myself and that if only I could bear the truth I would be convinced.He sure convinced me. Convinced me to be more selective to what I buy. I wish I could return it.

Would you ever listen to anything by Michael Gazzaniga again?

No. His arguments were interesting but not convincing, and if he was not trying to convince then why did he not introduce antithesis to his thesis. If he is not a college professor in philosophy, he should be. He would fit right in with all the other anti-conservative dopes out there.Reader beware: Gazzaniga has no concept that differing opinions matter. (Isn't it funny how I -- clearly conservative -- am asking for equal time.)

The narrator did fine. It was very hard getting beyond the diatribe to ascertain his ability.

What character would you cut from The Ethical Brain?

not sure if this is science or philosophy, but bad

This book contains very little relevant science, and thus doesn't appear to be a science book. It is also not a book of philosophy, in the sense of establishing a coherent theory based on a well-defined set of premises. Rather, it seems to be a collection of random thoughts of the sort one might discuss over a barstool. So if you are curious about Michael Gazzaniga's vague musings about ethics, you'll like this book. If you wanted to learn something more general about ethics, you won't.

The reader is annoying, which doesn't help.

'Who's in charge?' was brilliant and had a great impact on my life. 'Ethical brain' wasn't and hadn't (yet). There are some interesting points, but overall it seems a bit dated and leaves no coherent idea.
I would recommend waiting for another couple of weeks until Gazzaniga's 'Consciousness Instinct' is released on Audible. It does look promising.

Enjoyed the feeling after listening to this book. Now I know why my thinking mind creates my world from what has been stored in the brain

Few books make you worse for listening to them.

The only reason to listen to this is to find straw-man arguments that are easily assailed.

Power of Habit by Duhigg

Which character – as performed by Patrick Lawlor – was your favorite?

Gazzaniga is clearly well versed in his speciality - neuroscience - but as soon as he ventures outside those bounds he is incredibly pedestrian.

Gazzaniga's attempts at philosophy, sociology, and anthropology are remarkably thoughtless. I'm not typically a review-writer, but feel compelled to warn others of this book's shortcomings which are many and manifest. His competence in his field is unquestioned - the neuroscience aspects were interesting. But anything beyond his expertise is painful. Unfortunately the majority of the book is Gazzaniga venturing outside his expertise.

One example of the myriad: his support of embryonic stem cell research dismisses any actual discussion of the various sides with this metaphor: an embryo is like a human being like a home depot is like a house. There's so much wrong with this it's hard to know where to start. He is completely ignorant of the discussion on various types of potentiality and actuality that have been a part of philosophy for about 2500 years. The embryo will of its own devices fulfill its potentiality to become a fully formed human being. The home depot requires intervention from beyond itself to become a house. The embryo has active potentiality. The home depot has passive potentiality. The embryo becomes what it is supposed to be. The home depot becomes something completely different than what it is. It may be that this argument isn't convincing, but it clearly should be discussed.

He's also apparently ignorant of the discussions of what makes an organism an organism - it's self-organization. This isn't a trivial problem. It's one of our leading neuroscientists who writes books on ethics and sat on the President's Bioethics Council being ignorant of basic philosophical concepts.

I origanally gave this title 3 stars but gave it a 2nd listen and found it much more enjoyable and made sense.