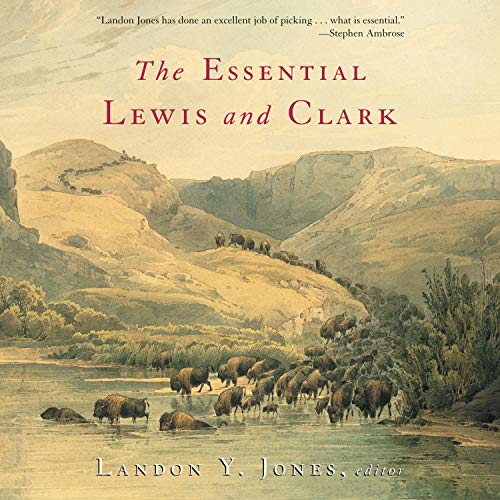 The Essential Lewis and Clark

The drive of discovery and lust for adventure have long been hallmarks of the American ethos, and perhaps no one has embodied that as well as Meriwether Lewis and William Clark. With the oversight and great organization from respected editor and author Landon Jones, this recording presents some of the most memorable journal entries from two of America’s most famous explorers. And with veteran performers Tom Wopat and Peter Friendman giving life to Lewis and Clark’s words, this audiobook is guaranteed to evoke an America that few today have ever experienced.

This compact volume of the journals of Lewis and Clark, compiled by American Book Award nominee Landon Y. Jones, includes all of the most riveting tales of their adventure - in their own words

The journals of Meriwether Lewis and William Clark remain the single most important document in the history of American exploration. This compact volume of their journals, compiled by American Book Award nominee Landon Y. Jones, includes all of the most riveting tales of their adventure, in their own words.

Here is a concise, breathtaking record of Lewis and Clark's legendary journey to the Pacific, written by the two captains - under unspeakable stress and the threat of constant danger - with an immediacy that startles to this day. Through these tales of adventure we see the Great Plains, the Rocky Mountains, and western rivers the way Lewis and Clark first observed them - majestic, pristine, uncharted, and awe-inspiring. We are in the moccasins of Lewis and Clark as they witness other wonders no European-Americans had ever seen before: new creatures such as antelope, prairie dogs, and, most memorably, grizzly bears. Also included are the explorers' encounters with Native Americans, featuring the amazing reunion between Sacagawea and her brother, a Shoshone chief who secured the expedition's safe passage over the Continental Divide.

Landon Jones has selected the most memorable journal entries left behind by Lewis and Clark, and then edited them for all listeners - those steeped in lore of the expedition, and newcomers to this unforgettable journey.

"Juxtaposing entries by the precise and poetic Lewis with the earthy and enthusiastic Clark, Jones has provided a vivid panorama of an epic undertaking. An essentially digestible slice of history." ( Booklist)
"In The Essential Lewis and Clark, Landon Jones presents the highlights of an Americn classic by letting Lewis and Clark tell their story in their own words." (Dayton R. Duncan, writer and producer of Ken Burns' PBS documentary, Lewis & Clark)

What listeners say about The Essential Lewis and Clark

Good, but maybe not as an audiobook

This is an excellent selection from the journals, and the readers are great. You get a strong distinction between the gruff, no-nonsense Clark and the sensitive Lewis, and occasionally a third narrator breaks in to provide background information. The extracts are well-chosen and lengthy, so it doesn't feel too choppy.

Still, I'm not sure that an audiobook is the best way to read Lewis and Clark. To enjoy the story fully I really wanted to follow their route on a map, but even the third narrator gives little information about exactly where they are at any time, so it's not possible to do that. There are times when you really want footnotes, too - L&C will describe strange animals, for instance, and you'll be trying to figure out what on earth they're talking about but can't.

This is as good an audiobook of L&C as you could wish for - but I still recommend reading them on paper in an edition with lots of helpful notes.

It is amazing to hear everything these men went through! I will definitely read again!

Very enjoyable, both the selections chosen for reading, and the narration. Best viewed as an introduction to the journey. It whets the appetite to hear more of the journals of Lewis and Clark.

I know it’s relative but in my opinion-Best narrators for the Lewis and Clark story!