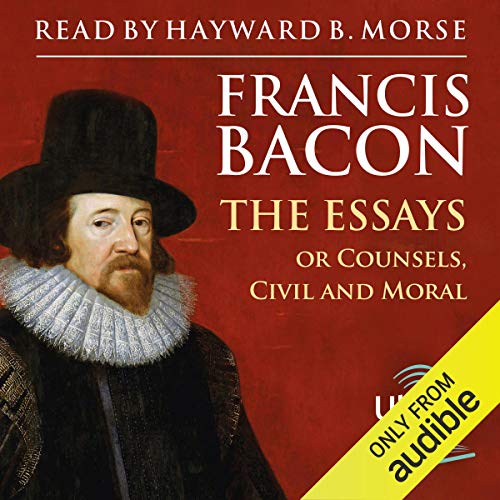 By: Francis Bacon
Narrated by: Hayward B. Morse
Try for £0.00

Francis Bacon (1561-1626), 1st Viscount St Albans, Attorney General and then Lord Chancellor of England, was an immensely learned, clever and ambitious man, with considerable political influence during the later years of Queen Elizabeth I and through almost two decades of the reign of her successor James I. However, he was also a philosopher with a wide interest in science, medicine and the classification of knowledge. Throughout his life he wrote a series of essays - following the manner set particularly by Montaigne, though extending back to Aristotle and others - the first 10 of which appeared in 1597.

In 1625, the year before his death, he produced a final collection comprising 58 essays entitled Essayes or Counsels, Civill and Morall, which has remained one of his most important and popular books. In the collection he considers a wide range of subjects, beginning with 'Of Truth', 'Of Death', 'Of Religion' and concluding with 'Of Anger', 'Of Vicissitude of Things'. A final work, 'A Fragment of an Essay of Fame', found in papers after his death, is now generally added to the main collection and is included in this recording.

The essays are, variably, witty, wise, entertaining and informative. Being a man very much of the world, who enjoyed and relished prominence and power, his ruminations centre on the practicalities of everyday life. 'Of Studies': ‘Reading makes a full man; conference a ready man; and writing an exact man.’ 'Of Suspicions': ‘Suspicions amongst thoughts are like bats amongst birds, they ever fly by twilight.’ 'Of Youth and Age': ‘Young men, in the conduct and manage of actions, embrace more than they can hold, stir more than they can quiet... Men of age object too much, consult too long, adventure too little, repent too soon, and seldom drive business home to the full period, but content themselves with a mediocrity of success.’ 'Of Riches': ‘I cannot call riches better than the baggage of virtue; the Roman word is better, 'impedimenta;' for as the baggage is to an army, so is riches to virtue.'

His life was conflicted, being driven equally by his intellectual interests and the pursuit of power, which saw the morality he proposed in his writings often compromised by his behaviour. Frequently living beyond his means, he was, towards the end of his life, deeply in debt and ended up being prosecuted for corruption and stripped of his position as Lord High Chancellor. But as with so many conflicted men, he speaks about life with authority.

This recording, amiably characterised by Hayward B Morse, concludes with a lively and affectionate biography written by the 19th-century Bacon admirer Alexander Spiers.

What listeners say about The Essays

An instant classic with excellent production value as Ukemi audiobooks tends to have. Hayward’s reading feels quite natural, as if he’s thinking it himself with a fluid and easy on the ears eloquent voice with editing that flows nicely along without breaking immersion and in my personal opinion an epic voice and performance for this category. Mr. Bacon’s wondrous councils, maxims and deep knowledge is not only a fascinating treat to listen to, but done a great justice and modern preservation with this release.