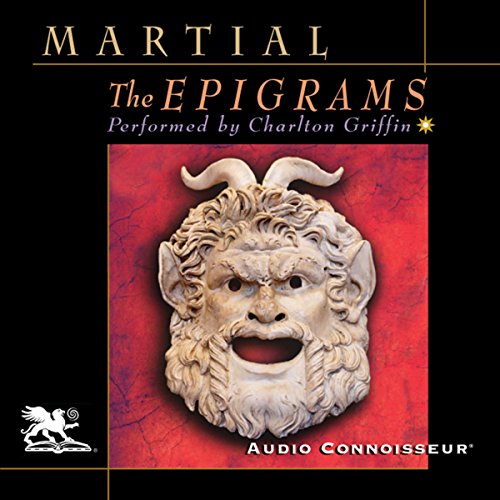 By: Martial,James Michie - translator
Narrated by: Charlton Griffin
Try for £0.00

Upon the death of the Latin poet Martial in about A.D. 104, a contemporary wrote, "He had as much good nature in his writing as he did of wit and pungency." He also had a genius for the epigrammatic poem, which has been characterized as a brief, interesting, usually memorable and sometimes surprising or satirical statement. In the hands of Martial, the epigram was raised to a pitch of perfection that has never been equaled to this day.

The enduring literary interest of Martial's epigrams arises as much from their literary quality as from the colorful references to human life that they contain. And readers (and listeners) today often see them as sharing an eye for the urban vices of our own times. Martial wrote over 1,500 of these gems, and this recording contains around 10 percent of the total. They are a very good cross-section of his work. Due to the adult nature of some of these poems, those that may be perceived as objectionable have been collected and are in a section of their own at the end of this production.

What listeners say about The Epigrams

My toilet mischief growing stale
I needed epigrams beyond the pale
Martial's book of verse would fit the bill
And transform my Sharpie into my quill
My one BIG issue with this book ...
Is the nine-tenths of Martial they forsook.

Ancient verse through a modern voice

On listening to these poems I felt I was back in ancient Rome. Charlton Griffin's rich voice is such a pleasure to listen to. Michlie's translations are so pithy and witty that you can easily forget that the poems were not originally written in English. I laughed at some of the lines that a Roman reader must have laughed at 19 centuries ago. Martial's grief over the death of the little slave girl is quite poignant. From a historical point of view, we get an idea of how demoralising and damaging the Roman patronage system could be. The reader will find himself or herself disgusted at some of Martial's attitudes, such as when he writes of forcing a young slave boy. But Audible have put the naughtier poems at the end of the recording, with an advance warning. And besides, for those of us interested in history, this unfortunately is also part of the historical record. A fascinating read.

These epigrams are full of wits and well read by the Charlton Griffin .I have to revisit this at least 10 times..