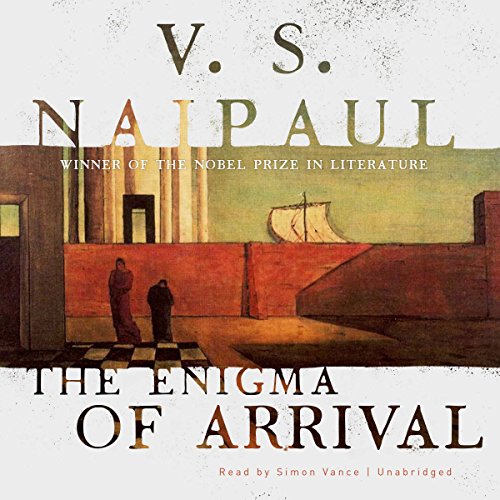 The Enigma of Arrival

The story of a writer's singular journey - from one place to another, from the British colony of Trinidad to the ancient countryside of England, and from one state of mind to another - is perhaps Naipaul's most autobiographical work. Yet it is also woven through with remarkable invention to make it a rich and complex novel.

What listeners say about The Enigma of Arrival

A masterpiece by a master. It is an intriguing work. Written with a tang of arrogance, like only Naipaul can achieve.

The novel started rather slowly with overly staid descriptions of gardens and the English countryside around Salisbury. One can tell that it's a non fiction novel, although it has elements that suggest fiction. He gives an elaborate description of his sister's funeral and cremation although he was not there. The novel is strongest to me when Naipaul turns the camera on himself and talks about his own losses as the son of the defunct British empire. His tone at times appears condescending towards gardeners and staff at the manor where he lived. His powers of describing characters is impressive. However the book would have been more uplifting if these descriptions also showed the glamor of ordinary prople .

He stands at one place and observes changes in the scenery of people and buildings with a keen eye for character traits. He brings everything to life like a painting.

Compelling author with a distinctive technique

Naipaul's complex patterns of repetition, each recurring element or event associated with incremental differences of perspective from that already conveyed or association with novel facts that alter their prevailing import, etc. is executed with a skill and precision few would be able to regard without jealousy.   As a stylist and master of rhetorical pace, he is among the first grade of 20th/21st century novelists...Esp. (in context of his peers), for his ability to preserve artistic consideration within the language of head-on description and overt analysis. Where there is implication, it is largely accomplished by matter of fact relation of events, the description of slowly decaying places, with more of the former out-loud appraisal than the latter "negative space" doing the heavy lifting.  This is in marked contrast to a more widely advocated and attempted method (one championed by a larger cohort of writers the equal or even better of Naipaul) who insist that "showing" rather than telling of or weighing in on their characters' qualities, constitutions, motivations, foibles, fallbacks, virtues and contradictions, is the modality proper to narrative art. Somehow, Naipaul manages to retain a commanding hand while conveying these latter dimensions by directly telling and describing them.  He does not greatly cater to the theoretically more seductive "show much, explain little, opine less" school of modernist stylistic. Given the heavy appeal of that approach to the literary elite of the 20th/21st centuries, Naipaul's habit of foregrounding outright commentary alongside direct example imbues his work with much needed originality. Like all great literary artists since Cervantes or Montaigne, Naipaul's ardent apprenticeship of multi-sided consideration, of polygonal sympathies, Naipaul's conviction of a definite plurality in human affairs, is a trait amply evinced in his tracking of a set of interrelated neighbors on a slowly-devolving, semirural UK estate during a brutal stretch of Thatcherite rule in the 1980s. Yet while the author makes similar pains to expend a healthy measure of overall book length on ostensible self-criticism, his self-probing challenges to greater ethical insight or maturity fall short. Fall more compelling are the portraits of others' vulnerabilities.  Naipaul adroitly assays his subjects' ingrained coping and maintenance strategies, their personal relations, challenges and opportunities, their cheap alibis and worthy acts of grace, rendering expressed attitudes and expressions in a shrewdly selected context of pertinent conditions. Yet he never does this on himself! One wouldn't know at all, having read this lengthy manuscript, of his own long marriages or much, if anything, of his real flaws beyond a few carefully guarded and whitewashed youthful preconceptions, which he confines to former immaturities of ambition or creative persona. There is nothing more thorny or viital put to the stand than such vagary. Hence, while only an author of substantive talent could fashion this work's unique generic blend of fiction, memoir and introspection with coherence; while only such a craft could organize its intricate cycles of repetition, or supply as fine a rumination on placeness and place....insofar as Naipaul sidesteps the hard and humbling task of self-exposure and genuine critique, he falls short of his project's true aims.

This is a masterpiece.
The more I read by him the more I appreciate his style of writing.
In this book he is very philosophical.
It really is an autobiography.
The narration by mr. Simon Vance is unsurpassed.
Thanks to all for making this book available to us, JK

A slow but elegant and evocative arrival

What an arrival. A slow, grinding arrival but made evocative and real by the elegant capturing of the everyday mundane. And how this capturing? By an astonishing, open-eyed attention to the visible and the background. A satisfying meditation on life, aging, the accumulation of wisdom and the inevitability of the grave / funeral pyre after the birth, the atrophying after the suppleness of youth, the coming round the curve of the droveway to a full circle. And I sign off with the inevitable: Naipaul, you genius! Thanks