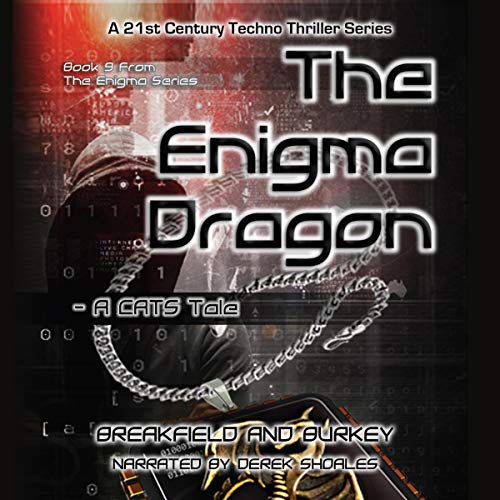 The Enigma Dragon: A CATS Tale

Do the vast amounts of information and technology available hold humans hostage? Does analog communication create a vulnerability?

The political climate in the world is unnerving. North Korea is running missile tests, but where are they getting their deadly supplies? Meanwhile, terrorists are hiding in plain sight, using American technology that is out on display in libraries and museums for the world to see, but are using analog methods to gather and assemble their information. No internet searches equal no red flags, which lets the bad guys believe they are operating undetected. But the Cyber Assassin Technology Services (CATS) team is on the job. As Juan and Julie Rodríguez send their operatives out across the globe to track down these foot soldiers also known as Analog Information Mules, they'll discover the horrible potential treats, and learn about each other along the way.

Mike and Marge control ePETRO, an oil shipping business with offices in London and New York, but they don't have the same business goals in mind. Marge intends to sell the North Koreans uranium in addition to oil obtained illegally from the government sanctioned Middle East. But Mike may have other plans, mainly, keeping the profits of these sales for himself. Then there is the mysterious Steven Christopher, who oversees the AIMs, and is working several angles behind the scenes. Steven is the only one trusted by both Marge and Mike, but why?

The CATs team has feet on the ground, with Ernesto and Tyler following two women through Washington, DC, as they visit the Smithsonian looking for nuclear fusion processes and down the Texas coast, where a dangerous package makes its way onto a ship bound for Asia. Jamie, an Irish man with a heartbreaking past, joins the team in Texas and finds not only a new job, but acceptance. George and Summit travel across Asia following the oil and some suspiciously mislabeled furniture. After a rocky start at being paired up, Mercedes and Brayson head to Panama and are watching a previously known Dark Net data center, but Mercedes is soon extracted to help out in DC. She quickly becomes embroiled in Steven Christopher's world. Brayson is left behind alone in Panama, and, still recovering from a lost love, learns that he can't truly be a part of the team until he has forgiven himself.

While Juan stays with Quip and his supercomputer ICABOD, tracking his team members and relaying constantly updated information at the team's nerve center, Julie heads to London. Julie finds herself in the center of all the trouble as she goes undercover in the ePETRO offices. When Julie disappears, Juan drops everything to find her. Quip loops his wife EZ, a Unified Communications expert, to help monitor and control the CATS team movements so that operatives can find the culprits in their different theaters of operation.

What listeners say about The Enigma Dragon: A CATS Tale

The CATS group is not my favourite of the story lines as I’m a big R-group fan but this one grabbed me by the Tail and had my interest and attention Marg style. Interwoven plot twists between CATS, the Russians the arabs the USA and North Korea. How easy it is to make cyber trails disappear and then the people. Some good thrills and humour. My favourite CATS team story of the series. Good Narration and few enough characters to make Dereks voice impressions not overwhelming. Love these stories great listening fun in the car and in social isolation.

Old School VS New School Technology - With a Twist

In today’s world of technology, everything can be tracked and hacked. Nothing digital is safe. ePetro’s Marge Baker and Mike Patrick are buying oil illegally from Muslim terrorist and making a hefty profit by selling to North Korea. Throw in historical documents that “analog information mules” are gathering by word of mouth to funnel through Stephen Christopher providing North Korea with blueprints to building atomic bombs. Unable to track the AIMs (nothing they do is digital), CATS have been one step behind but when two of their own, Julie and Tyler, disappear, the CATS team realize they must kick their game up a couple of notches before the game grows deadly for their friends. Charles Breakfield and Roxanne Burkey bring the CATS team together again for non-stop action while also adding in some past characters. I loved how they folded in Jamie onto the team and into the story! The twists and turns in this technological thriller are amazing. Breakfield and Burkey blend the characters and plot together making them seamless – nothing is forced or out of balance. The visual story that their carefully constructed words paint is thorough and clear, I can see Julie, Stephen, Jamie, and the others clearly in my head as I listen. I dare say there was one point when I could not believe where they took the story – OMG, I wanted to cry and scream at the same time! Derek Shoales is the perfect narrator for this series. He has easily become the world of Enigma! He projects the fear, love and everything in between with the smooth flow of his voice. He never stumbles, it’s like he is living it when he narrates. The production quality was perfect.

This narrator is AWESOME!

So, a quick recap... this was my first book by this author AND this narrator. I was easily impressed by the voice actor's facility with accents, and the author's flabbergastingly elaborate plots. This was my first foray into this world, but it won't be my last. Seriously, if you're a Bond fan, and you love complicated plots with a bit of gratuitous sex, then you will LOVE this book/series. I'm told they are standalone, but... I did struggle a bit in the beginning to make sense of book 9. I'm enamored enough to start at the beginning. The characters are likeable, and the narration is top-notch.