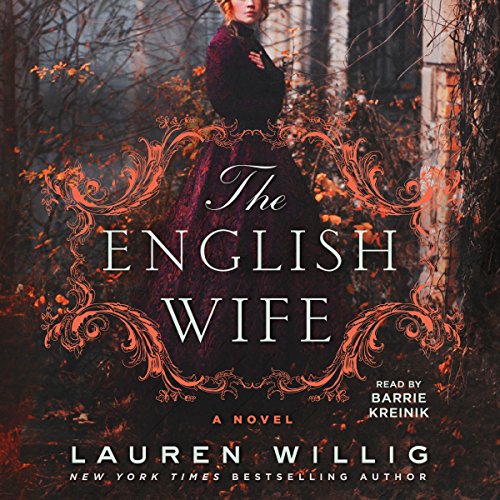 From New York Times best-selling author Lauren Willig comes a scandalous audiobook set in the Gilded Age, full of family secrets, affairs, and murder. The English Wife is high drama and sure to impress listeners everywhere.

Annabelle and Bayard Van Duyvil live a charmed life in New York: He's the scion of an old Knickerbocker family, she grew up in a Tudor house in England, they had a fairy-tale romance in London, they have three-year-old twins on whom they dote, and he's recreated her family home on the banks of the Hudson and named it Illyria. Yes, there are rumors that she's having an affair with the architect, but rumors are rumors, and people will gossip. But then Bayard is found dead with a knife in his chest on the night of their Twelfth Night Ball; Annabelle goes missing, presumed drowned; and the papers go mad.

"Willig's audiobook, set in Gilded Age New York and London, is a mix of romance, mystery, and murder. Narrator Barrie Kreinik is a perfect fit for the mix of British and American characters...Kreinik's reading is slow-paced, allowing the tension to build as the story unfolds." (AudioFile Magazine)

"The English Wife is atmospheric, romantic and heart-breaking.... The enthralling story, coupled with Barrie Kreinik's outstanding narration, makes it an audiobook I'd definitely recommend to anyone looking to enjoy an intricate, well-constructed and character-driven mystery." (AudioGals)

I was entertained by the story and characters but it is never explained why the chimney blew up.

Left with some missing pieces

Although I enjoyed the time period and the colorful scenes, I have reservations about some of the characters. Clearly the author is well acquainted with Shakespeare and the classics, but her portrayal of the mother was far from subtle and seemed flat. She was never allowed to be anything other than a gorgon, and very unsympathetic. With so many ends left loose, the high drama of fire and young romance seems a bit trite. Why did Lacy leave so quickly when he still needed funds? Obviously the mother had to be removed from the scene for the young and ignored daughter to find herself. A bit trite and predictable but still well written enough to be entertaining.

Not sure what to call this… Turn of the century mystery romance?

I had high hopes of this when I started listening and it bore up fairly well most of the way, but a mediocre turn by the narrator and some pretty cliché-ridden writing/dialogue ultimately sunk the experience for me. Considering it at the end, I realize the writer is better with the mystery than she is with the romance. The thing is, when you are reading a story with somewhat heightened drama and romantic suspense, you expect the writer to tie things up fairly neatly at the end, which doesn’t happen here. Virtue triumphs, etc. (I expect no such thing from grittier tomes, but this was not one of those.) Spoiler alert: a rather nasty rapist goes unexposed and relatively unpunished, and the title character is whereabouts unknown at the end. Perhaps the author is imagining a sequel? I’m pretty sure I won’t be reading it. Oh, and the narrator? Too much acting in the narration portions. Decent accents, but some words mispronounced. Do these things get directed anymore?

Sappy, predictable lines and characters, nothing remotely unique to offer. I was embarrassed people might hear me listening to it.

I'm recommending this book to my friends

Great mystery. I got it all wrong when trying to figure out who the culprit was.

Great narrator but a boring story

That's pretty much all I have to say. This was overlong and boring, and there was no character development. A great narrator was wasted on this.

19th century New York--gotta love it! I've listened to most of Lauren Willig's Pink Carnation series--most were great, some not as good as others. The English Wife was something of a change of pace--though it still contains plenty of mystery, intrigue, and excitement, it also contained more serious themes such as homosexuality and divorce (in the 19th century) than her other novels. I also thought some of the characters were developed more thoroughly--for the most part almost all of the characters were neither all good nor all evil--the "evil" characters contained some redeeming qualities, while the "good" characters had sometimes major "true to life" flaws. However; if you like a complete resolution at the end and no cliffhangers this might not be the book for you. I'm not giving anything away by saying that the ending left several characters and issues unresolved.

Couldn't stop listening. So drama packed! This book is a must read for snow days.

couldn't get through this book

though the premise of the book is good, ur was painfully slow moving. I like historical fiction but they're ...has to be some action. the marathon is as droning as the book.

Very, very slow. It was ok but lackluster for sure. I won’t be looking into anything else by this author. Narrator was wonderful though!