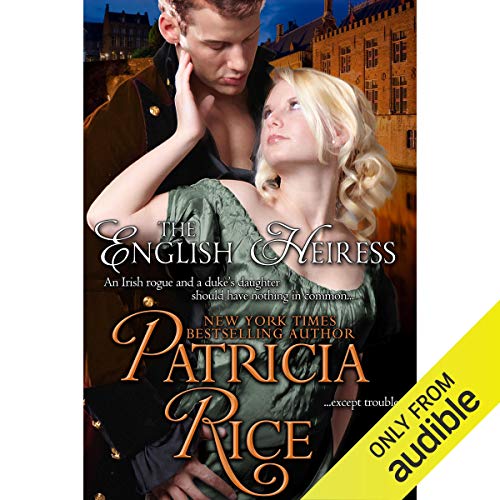 Talk about star crossed lovers! Romeo and Juliet have nothing on Michael O'Toole and Lady Blanche Perceval, two strong-willed characters who find themselves at odds - and perhaps in love. Roger Clark gives a wonderful performance of Patricia Rice's novel about love and class in feudal Europe. Clark excels particularly in giving voice to Lady Blanche, a brilliant but sadly powerless woman, who finds herself at the mercy of the men surrounding her. Clark's tone is sharp yet sexy, making her the perfect actor for a fast-paced romance such as this.

An Irish rogue and a duke’s daughter should have nothing in common except trouble....

Though enchanted by the selfless beauty of a duke’s granddaughter, Michael - a man of many names but none his own - has wisely kept his distance. But two years after the disastrous fire that brought Lady Blanche Perceval into his life, he is saddled with a lost, lying Irish waif and needs a woman’s understanding aid. To his dismay, the generous lady he remembers now despises him for deserting her when she needed him most.

Blanche has inherited all the wealth and responsibility of a dukedom, even if it is her cousin who wears the title. Forced to rely on her men of business to help her make decisions since she has no experience or knowledge of her own, she is at constant odds with the new duke who wishes to marry her for the sake of the estate.

When the irresistible and unreliable Michael O’Toole materializes in her life to enlist her care for another of the abandoned orphans he’s rescued - as he once did for her - Blanche doesn’t know whether to kill him or kiss him. After terrorists blow up her carriage, it becomes apparent that running away might be the best choice of all - but can they survive the pitfalls of their impossible attraction?

"Finally, Michael O’Toole! I’ve been waiting for his story ever since I read Patricia Rice’s The Marquess years ago. Michael and his delicious duke’s granddaughter demonstrate why bad boys are best!" (Mary Jo Putney)

Roger Clark is the best narrator!

Never read a romance novel before, but with Roger's narration I really enjoyed it. Good story also.