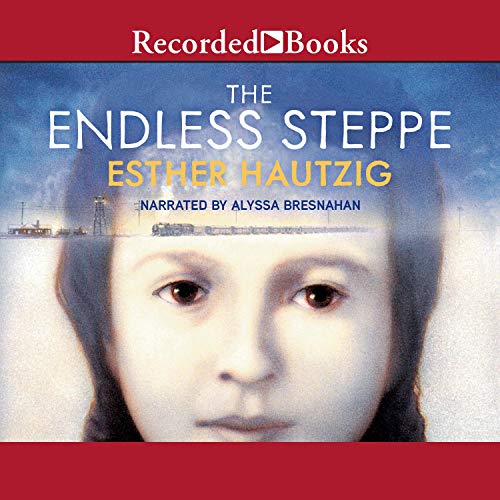 Growing Up in Siberia
By: Esther Hautzig
Narrated by: Alyssa Bresnahan
Length: 7 hrs and 48 mins
Categories: Children's Audiobooks, Biographies
4.3 out of 5 stars 4.3 (7 ratings)

Poland, 1940. The Russian army invades the beautiful city streets of Vilna. Soldiers storm 10-year-old Esther Rudomin's house and arrest her entire family. The Rudomins, the soldiers say, are "capitalists - enemies of the people".

Forced from their home and friends, the Rudomins are herded onto crowded cattle cars. Their destination: the endless steppe of Siberia. For five years, Esther and her family live in exile, weeding potato fields and working in mines, fighting against all odds to stay alive. It is not an easy life. But through it all, Esther sustains the hope that one day she will return to Poland - and to freedom.

A National Book Award finalist, The Endless Steppe is the true story of Esther Rudomin Hautzig's girlhood in World War II Siberia. For over 25 years, this extraordinary book has touched the hearts of young people around the world with its vivid portrayal of life during World War II and its inspiring testament to the power of hope in the harshest conditions.

What listeners say about The Endless Steppe

If you could sum up The Endless Steppe in three words, what would they be?

A story for the ages, based on the author's true
deportation to Siberia, from her beloved Polish
multigenerational house and garden. The Nazi invasion and occcupation of Poland, and evacuation of the Jewish people, is seen through
the eyes of a bright, articulate,

Not too graphic, essential text. I preferred this Award winning book over

Excellent book! My whole family was hanging on every word. From the 17 year old to the 6 ye old. Amazing story of the human spirit through the life of a young girl during Ww11. Beautifully read.

What made the experience of listening to The Endless Steppe the most enjoyable?

Chapters are not correct

Chapter 7 from list states chapter 10. It is very difficult to find the actual beginning of chapters. Deleted and redownloaded but it did not correct the problem.

I was engaged, with this true story, from the first paragraph to the last. I've seen The Endless Steppe described as a "children's book", but I'm 63 and I loved it!

This was a book that was in my curriculum while I was at school and i have never forgotten it. So when I saw it on Audible I just had to get it. Again this book did not disappoint The true story of Ester Hautzig who was deported to Siberia it tells the struggles that a young girl and her family had to overcome and how they made the most of a bad situation. I would strongly recommend this book. .

I really enjoyed this book. The narrator did a good job reading it. Most of all though I love the story. I've read several world war II books and this is one of the best I've found for the 10yo to teen age group. I also found it enjoyable as an adult. The story was well-written and engaging. It shows someone making the best of a difficult situation. Also while it deals with difficult subjects head on it it does it in a way that a child who might be overwhelmed by the horrors of war can take what they're able to understand and not have to confront things they're not ready to deal with yet. I also liked that it told the story of exile to Siberia which is a narrative not often seen in books for younger audiences.

An excellent true story of a family exiled to Siberia during WWII, told from the young girl's perspective. I thought it enjoyable narration.

For avid book listeners or readers, I would give this book a 13/10. Awesome and amazing.

One of the very best..

biographies I have ever read/listened to. It should be as popular as The Diary of Anne Frank.