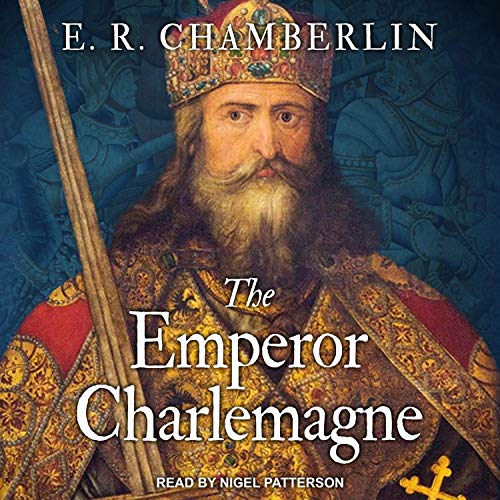 By: E.R. Chamberlin
Narrated by: Nigel Patterson
Try for £0.00

On Christmas Day, 800, Charlemagne was crowned "Emperor of the Romans" by Pope Leo III.

Under his guidance the Carolingian Renaissance flourished, with his capital of Aachen becoming a center of learning and artistic genius.

The legacy of Charlemagne on European history and culture is monumental. Yet, within 30 years of his death, his empire had fragmented.

Who was this legendary ruler? How had he managed to rule these vast domains? And why has his legacy continued to influence Europeans to this day?

E. R. Chamberlin's masterful biography of Charlemagne demonstrates the sheer force of will that this charismatic leader was able to command as he created a realm to rival the Byzantines in the east.

Through the course of the book Chamberlin brings to life how Charlemagne forged his empire and uncovers the people, the religious and political controversies, the social and agricultural conditions, and the changes in warfare that took place more than 1,000 years ago.

What listeners say about The Emperor Charlemagne

Unsure how recent the original may be, but this is a useful survey of the life and times of a very important man. The reader is particularly to be complimented for his efforts in the first appendix, to read and pronounce both ancient German and the earliest written French: who knows how it sounded, but a characteristically brave try!
Chamberlin gives a really broad cultural and political context and I’just read his book on the bad popes with which this book makes useful and insightful connections.

Why write a book that can be neither read nor listened to, especially on such a compelling topic? I can only conclude that the author wrote it for himself. The pomposity of the prose, the sub clauses of the sub clauses, the inclusion of irrelevant information and the utter lack of an engaging narrative makes this volume compulsory reading for English literature students: how to bore your reader to death. As Monty Python would say what is the bloody point? I have rarely encountered such turgid prose, tortured sentences that run the length of a paragraph, and a deep-seated fear of actually engaging the reader. Yes, it’s that bad. Sample before you are tempted to purchase, and what you get will only get worse. Sadly, and after much deep thought, I reckon this is one the most unpleasant experiences inflicted on the human race over the last 250 years, with the possible exception of disco.