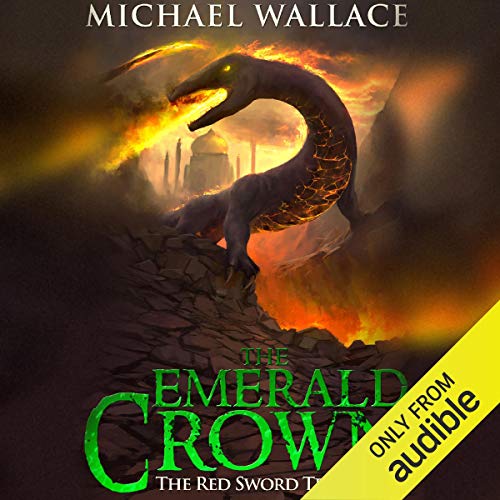 The final book of The Red Sword Trilogy.

When Nathaliey, a young wizard, is taken prisoner by marauders trying to break her will and force her to join the sorcerer's acolytes, the last help she expects is from the griffin riders who have harassed her and her companions through the mountains. But when their chief rescues Nathaliey from an enemy-held castle, the griffin riders join a temporary alliance of wizards and paladins to push back the sorcerer's invasion.

Meanwhile, Nathaliey's fellow wizard Markal is aiding the master in a desperate attempt to save the contents of the magical library in Syrmarria before the sorcerer brings up fire salamanders from the infernal realms to burn the city. They flee for the order's gardens ahead of the destruction, pursued by the sorcerer's armies, both living and dead.

As the enemy encircles the garden fortress, Markal realizes that the only way to save their lives and the precious knowledge they protect may be to call forth a terrible incantation from a past age that threatens to destroy as much as it preserves.

In this final book in The Red Sword Trilogy, each member of the Order of the Crimson Path is resisting King Toth's attempt to rule. Chantmer and Memnet are racing to salvage as much of the library as they can before the city is destroyed by fire. Markal is making his way to rejoin the Order and is hunted in the mountain passes by the griffin riders. And Nathaliey is aiding the Black Shields' fight against the marauders until she's captured by Toth's dark acolytes. Imprisoned and unable to summon any magic, she learns just how the dark sorcerers are made.

This was an awesome finale to the series! I really didn't want it to end, it had me searching for more books by the author set in this world. This book fleshes out the griffin riders and the dark acolytes, and they're both fascinating. The large scale battle scenes are epic, and well written so I can picture everything just as it happens. It's very fast paced, and kept me hooked the entire listen.

One of the things I enjoyed most was the author's depiction of the female characters. They're all strong and fierce women, and they're not in the book just to be love interests or damsels for the man to save. Bronwyn, Nathaliey, Yuli, Marissa, they're all fierce fighters, intelligent and in command, and I loved that matter of fact depiction of them.

The narration was well done, the narrator performed consistent accents and different voices for each character. She had a convincing male voice, and a smooth style that immersed me in the story. I requested a copy of the audiobook, and I'm voluntarily leaving a review. I would 100% recommend this to fantasy fans.