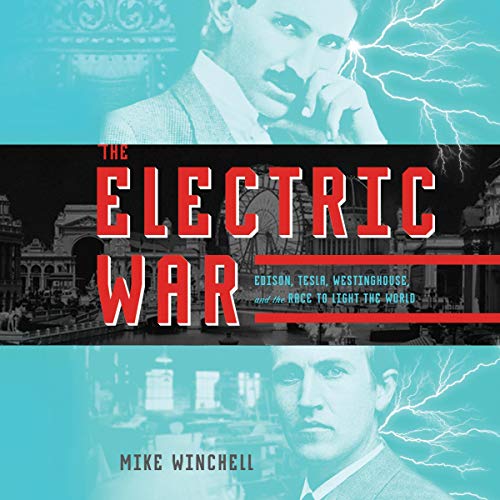 In the mid- to late-19th century, a burgeoning science called electricity promised to shine new light on a rousing nation. Inventive and ambitious minds were hard at work. Soon that spark was fanned, and a fiery war was under way to be the first to light - and run - the world with electricity.

Thomas Alva Edison, the inventor of direct current (DC), engaged in a brutal battle with Nikola Tesla and George Westinghouse, the inventors of alternating current (AC). There would be no ties in this race - only a winner and a loser - and the prize was a nationwide monopoly in electric current.

Brimming with action, suspense, and rich historical information, this rousing account reveals the true story behind one of the world's defining scientific competitions.

What listeners say about The Electric War

This story was very well written and Greg Tremblay did a great job, as always, narrating. I love the details of each inventor's lives and learning of their personal journeys. This was a great telling of the history of the beginning of electricity. Very informative but not overwhelming as some tells of history tend to be. A great listen!

Excellent, fascinating history on the beginning of electricity, focusing on Edison, Tesla, and Westinghouse. Engaging, well written story with superb narration bringing it to life. I learned a lot without ever being bored or overwhelmed by the information. Enjoyed it thoroughly.

Inspiration and instructional on many fronts

Book outline:
Published in 2019, the author Mike Winchell presents a marvelously granular account of the brutality American investors and innovators inflicted on their competitors to gain prominence and dominate the wide-open frontiers ushered in by new technologies like electricity. In this war of the titans, Thomas Edison, Nikola Tesla, and George Westinghouse, Edison inflicts upon the young Serbian immigrant, Nikola Tesla, a brilliant engineer who came to work for Edison, a powerful and sustained attack to derail Tesla’s innovations from becoming the standard for distributing electric current. Tesla's superior innovations prevail and win the war to wire the world with the help of his honest business companion George Westinghouse who shields and assists Tesla in ushering in the age of alternative current (AC) to power America and subsequently the world.

As the author covers the three most influential architects of the electric war to wire America and set the standard for the rest of the world, he reveals the inner nature of each of these three luminaries through their personalities and the events and fights that lead to the final decision to wire America using alternate current, a Tesla innovation and rejecting direct current, an Edison discovery. This is a gripping journey told skillfully and in detail by the author.

What's the core message?
The core message is about human frailties even among geniuses, and about the triumph of right judgments even in the fog of confusion. Thomas Edison, the wonder-child of innovation had flawed ethics. Nikola Tesla was a genius engineer but was socially awkward in real life. George Westinghouse by contrast was a brilliant innovator but he also held up high morals in his business dealings. The author shows that the genius need not come from formal schooling or college always. Neither Edison nor Westinghouse attended college, yet both were prolific innovators of critical advances. However, each of them like successful innovators had a firm grasp of their technological excellence from years of tinkering, apprenticing, experimenting, and practicing solving problems. In the making of an innovator, there is no replacement for work that lines up with passion, curiosity, and experience.

How do these concepts compare with points raised in other books?
Other books that cover innovators often examine both the technical and personal sides of the innovators. In much of the information published about Edison, the books do legitimately, justifiably, and admirably account for Thomas Edison’s genius for invention. Simultaneously, they also acknowledge his breach of ethics and the brutal and persistent attacks on honest competitors. In particular, they give accounts of Edison’s unjust publicity campaigns against Tesla's superior alternate current system to distribute electricity to stop it from becoming the standard. Similarly, Tesla is shown as an awkward but genius innovator who gets the flashes of inspiration for his innovations in this mind and goes on to perfecting them without the need to draw up detailed plans. They show that the awkwardness in communicating with others stops Tesla from benefiting from his engineering and technological genius. He is seen as a loaner, only able don’t muster up fleeting moments of masterful public discourse. By contrast, Edison is a master of public performances to present his breakthroughs. Fortunately, Tesla's advisers prepare him well for the few pivotal times when this performance is key to the success of their joint initiatives that mark the winning of public recognition over the doubts created by Edison's campaigns. George Westinghouse is the shield and rail track that paves the way for the Tesla AC system to power the world. Westinghouse is a master of perfection in the organization, planning, and executing of a plan. In a world of high-stakes wins and losses and questionable ethics, Westinghouse is a voice of trust. His ethics and values shine in the way he takes care of his workforce. It was George Westinghouse who initially started giving Saturdays off to his workforce so that they could have Saturday and Sunday to spend with their families.

What the book does well.
This book is a dramatic, relevant, and insightful story of the titans of electric current, their evolution from childhood to adult geniuses, and the brutality of business success.

What could have made this book better?
The genius of the story is about the besting of Tesla's AC over Addison’s DC electrical transmission system. Tesla's superior system won even with Edison’s constant, cunning, and unfounded publicity campaign’s falsely attributing dangers to the AC system. Two pivotal decisions settled and sealed the AC system's superiority. The powering of the 1893 Worlds Faire in Chicago, and the powering up Niagara Falls. While the author does an exceptionally commendable job telling the story, he stops short of drawing the most meaningful lesson of the story: the genius of America resides in rising above unfair personal attacks in choosing the most useful technology based on merit. Another aspect that could help us understand the three main characters would have been the personal lives, mentors, and influences that shaped these men in their adult lives.

Who would benefit from reading this book?
All people who influence the lives and futures of young people should also read this book: parents, teachers, and leaders. As well, those who aspire to innovate beyond just excelling should read this book.

This book contains lessons about excellence, persistence, loyalty, bullying, fairness/unfairness, relationship maturity, and collaboration. It can be a medium of discussion to teach youth how to deal with ruthless competitiveness when the prizes for winning are wealth, celebrity, and dominance.

What I got from the book
Innovation is a state of mind. It is embedded in peoples' thinking. Innovators don’t need to have formal education. They’re problem solvers. Edison had no formal schooling, neither did Westinghouse have a college education. Both were experts in their innovative fields and captains of industry. They got there by learning, doing, and improving. Further, they harvested the knowledge of their teams and collaborated with necessary collaborators in advancing their work.

This awesome book reinforces that oftentimes even innovative genius heroes like Edison have a darker side of human frailties and the technical genius of a Tesla does not guarantee a life of prosperity for those who lack likeability and that a good person like George Westinghouse rises above flawed ethics to right the wrongs. Still, in the totality of outcomes that impacts the masses, those who are given the responsibility of making choices, make the right decision. Much is made of Tesla dying alone and poor. This would most likely not have happened if Westinghouse were alive when Tesla faced financial hardship.