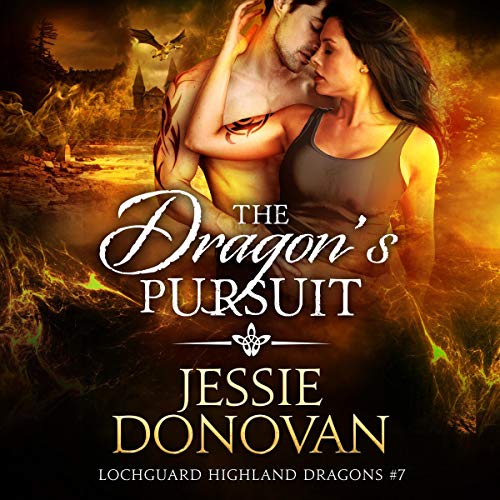 When Dr. Layla MacFie realizes someone is stealing much-needed medical supplies, she doesn't know who to trust inside her surgery. Determined to find the culprit herself, she reaches out to Lochguard's electrician Chase, who just happens to be the younger male who's been trying to woo her for months. But since there's no one else to help install the security cameras, she can't avoid him any longer and ends up being alone with him far more than she wants. If only the life of a dragon-shifter doctor wasn't so complicated, she would be tempted to give in and sleep with the male.

Chase McFarland has known for the last two years, ever since the day after his 20th birthday, that Layla is his true mate. While he tried to resist his dragon's badgering, it didn't take long for Chase to realize how amazing Layla is and that he wants to take care of and claim her for himself.

His initial attempts to win her all fail, but when she asks for his help with a secret project, he decides to change tactics and prove he's a worthy male. The more time they spend together, the more Layla gives in, until he's ready to tell her the truth and face the consequences.

As the pair dance around each other and discover each other’s secrets, they find out who the thief is and must decide what to do. Will Chase finally be able to prove he's mature enough for the much older Layla, or will she forever be chained to her work and deny what both she and her dragon crave?

What listeners say about The Dragon's Pursuit

I loved this book!!! I was so happy to see Layla & Chase get their HEA.

As always, Jessie Donovan is a great writer and I really loved this story. I might even consider it one of my favorites. It had everything you can ask for...suspense, an emotional Rollercoaster, plot twist and I cant say more without giving so much away. I definitely recommend this book. The love story is just beautiful and it makes you wish these dragon man (the main character in particular) actually existed. He's just so nice, caring and patient!

Lochguard
Dr Layla Macfie is a Dragon shifter who is the head doctor at the Lochguard Hospital. She is an workaholic.
Chase McFarland is a dragon shifter too and much younger her. Besides she is to find a partner outside the clan. If possible.
Chase on the other hand knows Layla is his true mate. He is on a mission to show her how good things could be with him a round. Does he have a shot?
Oh my I loved it!
This book is full of laughs, romance, spice and everything nice . Its filled with awsome characters. I couldn't put it down. Don't miss this one dragon fans.

Layla has pretty much been on her own for a while.
Chase has been trying to win Layla over because she deserves someone to take care of her the way she takes care of the clan.
Layla is worried about the age difference between them & she doesn't know how to let go.
Will Chase win Layla over?
Can Layla learn to let someone take care of her?

This is a great addition to Lochguard series. I loved watching Chase try to win Layla over.

The dragon doctors were probably my favourite thus far! Normal doctor stories are always full of action and craziness. Now and in dragons and it is an amazing story!

The performance by the narrator was fantastic, I really loved the way they bought the story to life

Chase has known for 2yrs Dr Layla McFie is his true mate but being younger than her he know he needs to prove he’s what she needs and can handle her busy life.

Whilst not packed with the action we’ve seen in previous books this story in the series gives a closer look at life inside the walls of Lochguard. I absolutely adored how these two complimented each other.

I feel in love with this book even more.

i really loved this book and could not pause it. i listened straight throigh because it was that good. There so many moments that were great in audio. i really love this nartator. jessie dinovan always picks great narrators.

Another awesome book by Jessie Donovan. The whole older woman, younger man concept was just as hot, funny and sexy as all the other couple's Jessie writes for. I love how Chase knew what he wanted and wasn't going to let him being younger than Layla stand in their way of true love. He's known for years that Layla was his true mate and it was time for him to win her over once and for all. There were also a few twists and turns that made this book stand out. Brian did another amazing job bringing the characters to life, I really enjoyed listening to him.

This was a fantastic story. I wasn’t sure how it was going to work with Chase younger, just like the rest of the clan, but he was able to prove that sometimes people are old souls and shouldn’t be judged by a number. It was so nice to see Layla’s softer side. The 2 definitely compliment each other. Lots of twists and turns I didn’t see coming. It’s nice to be surprised. I can hardly wait for the next trip to Lochgard.
Brian did another wonderful job. His voice relaxes me and lets me focus on the story.

I Absolutely loved Chase and Layla's story. They were meant to be. Great story.

I loved this book and the Narration is wonderful. the book with Narration will suck you in and will make you want to stay. Amazing.