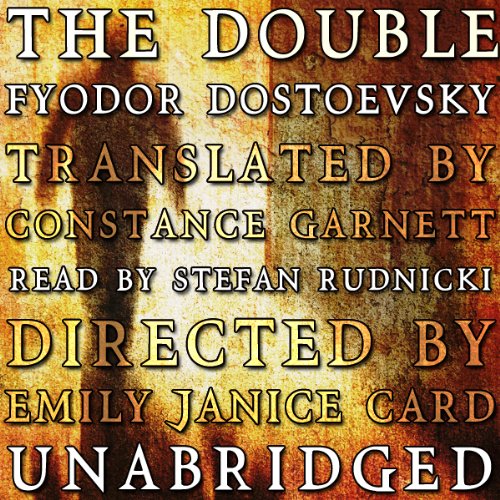 By: Fyodor Dostoevsky
Narrated by: Stefan Rudnicki
Try for £0.00

First published in 1846, Fyodor Dostoyevsky's novella The Double is a classic doppelgänger and the second major work published by the author. It is the story of Yakov Petrovich Golyadkin, a government clerk who believes that a fellow clerk has taken over his identity and is determined to bring about his ruin. Considered the most Gogolesque of Dostoevsky's works, the novella brilliantly depicts Golyadkin's descent into madness in a way that is hauntingly poetic.

The Double illustrates Dostoevsky's uncanny ability at capturing the complexity of human emotion, especially the darker side of the human psyche.

"Not one of the author's better-known works, this 1846 novel introduces Golyadkin, a man who one day meets his exact double....Golyadkin's happy life spirals downward into paranoia and neurosis as his friends begin to abandon him for the doppelganger." ( Library Journal)

What listeners say about The Double

Takeover of One's Self

Takeover of One’s Self
Jean A. Vachon

WICKENBURG, AZ - Yakov Petrovich Golyadkin is a government clerk. In this poignant novel by one of the greatest Russian writers, Fyodo Dostoevsky, Golyadkin finds out to his dismay that a fellow clerk has taken over his identity.
Before he discovers that he has a double, we are familiarized with Golyadkin, his habits, his dreams, his everyday actions.
The novel is slow and reminds the reader of daily life. But the end result is poetic in that the author reflects on ordinary life and aspirations.
The main character is approaching the end of his working life. He is getting old. What are his future prospects?
And then appears this younger copy of himself.
The comparison is severe and brings Golyadkin close to insanity.
The psychological analysis in this short novel is fantastic!
I was familiarized with the literary merit of Dostoevsky in the course of my university studies through the study of Crime and Punishment, The Idiot, and The Brothers Karamazov, a long time ago. These fantastic novels have enriched my understanding of life.
The emotions, fears and difficulties of life that they describe are so real and haunting in their psychological analysis motivate me in strongly recommending the listening or reading of The Double, the story of the takeover of one’s self.

A nightmare: Mr Goliadkin, a Russian bureaucrat, finds his life falling apart, and to make matters worse, someone who looks exactly like him, and has the same name, shows up and appears to be conspiring against him. Things do not end well for Mr Goliadkin.

I can't think of anything else I've read by Dostoevsky where the narrator had such a loose grip on reality. The action is presented from Goliadkin's point of view, and it's hard to tell when he's seeing something for real and when he's hallucinating. The prose itself, with its repetitions of key words, especially proper names, begins to have a hallucinatory quality. Goliadkin slides into full-blown paranoia, and at times he takes us with him.

Richard Pevar, in the introduction to his translation of the book - not the one used here - says two things about it that seem wrong to me. He says that Goliadkin isn't an example of "the abnormal and pathological," but an attempt on Dostoevsky's part to explore a "normal human soul, but by means of an extreme case and a bold device." And he says that Dostoevsky came back to this theme later, with greater artistry, in "Notes from the Underground." For this non-expert reader, it's hard to see any other interpretation Goliadkin's ruminations but a gradually worsening schizophrenia; and the narrator of "Underground," as compulsively self-conscious as he is, doesn't seem quite so unhinged.

Like many of Dostoevsky's characters, Goliadkin combines a paralyzing and suffocating self-consciousness with an appalling lack of self-awareness.

Stefan Rudnicki gives a powerful reading, conveying Goliadkin's desperation and paranoia with real anguish. And he also conveys the repetitive rhythms of the prose without overemphasizing them. Probably the best thing I could say about him is that my cat purrs when Rudnicki is on the speaker.

Didn’t like the story so much. I liked Dostoyevsky other books better...
The plot was too slow and boring

Pass this one by

This is the first audiobook that has disappointed me so I'm not too upset about my track record. Afterall, I did listen to the sample piece to make sure it would be to my liking and the selection was apparently interesting because I went for it. Stefan Rudnicki has a great voice but the story/content was all over the place. It felt like tuning in was almost painful - honestly it was the longest 6+ hours ever and I still don't know what the book was about nor do I care to know so if there are any fans out there you can save the explanation. I don't want to rag on the book but I wish someone else had left a review and I would have passed this one by.