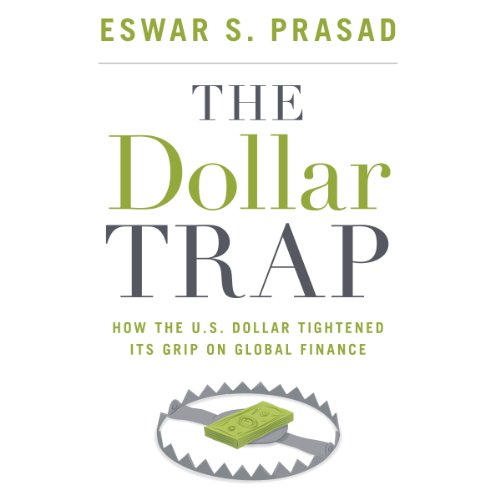 By: Eswar S. Prasad
Narrated by: Dennis Holland
Try for £0.00

The U.S. dollar’s dominance seems under threat. The near collapse of the U.S. financial system in 2008-2009, political paralysis that has blocked effective policymaking, and emerging competitors such as the Chinese renminbi have heightened speculation about the dollar’s looming displacement as the main reserve currency. Yet, as The Dollar Trap powerfully argues, the financial crisis, a dysfunctional international monetary system, and U.S. policies have paradoxically strengthened the dollar’s importance.

Eswar Prasad examines how the dollar came to have a central role in the world economy and demonstrates that it will remain the cornerstone of global finance for the foreseeable future. Marshaling a range of arguments and data, and drawing on the latest research, Prasad shows why it will be difficult to dislodge the dollar-centric system. With vast amounts of foreign financial capital locked up in dollar assets, including U.S. government securities, other countries now have a strong incentive to prevent a dollar crash.

Prasad takes the listener through key contemporary issues in international finance - including the growing economic influence of emerging markets, the currency wars, the complexities of the China-U.S. relationship, and the role of institutions like the International Monetary Fund - and offers new ideas for fixing the flawed monetary system. Listeners are also given a rare look into some of the intrigue and backdoor scheming in the corridors of international finance.

The Dollar Trap offers a panoramic analysis of the fragile state of global finance and makes a compelling case that, despite all its flaws, the dollar will remain the ultimate safe-haven currency.

What listeners say about The Dollar Trap

The best currency in a shaky neighborhood

One needn't agree with the thesis here (that the dollar has reasons to remain the world's primary reserve currency for some time to come) to benefit from this smart tour of big issues in global money. The US dollar's demise has been proclaimed countless times, and for a host of reasons (many reviewed here), it keeps bobbing up to the surface for another interval as the most important global currency. Much of it might be called its enduring network externalities -- it serves needs no other currency can -- and the other contenders for various reasons haven't shown themseves ready for prime time. This continues to provide Americans an "exorbitant privilege" (a French politician's onetime term of resentment), so it is worth focusing on -- as life could be quite different in a world of faded dollar hegemony. Might as well enjoy it while it lasts, while being mentally limber for what might come next. Here I also sensed a subtext -- the USA has some unique qualities of internal robustness and stability (sometimes despite what seems like our best efforts) that this enduring buoyancy reflects. We are still in many ways a haven from world chaos, for people as well as their money.

The China/US Struggle for Economic Dominance

No matter which side of the issue you’re on in the zero sum game between the two greatest powers of the 21st century—China or the US—this book will give you a relatively unbiased look at how the global financial system perpetuates America’s economic dominance and explain why China manages its own financial system the way it does. Definitely worth a second listen.