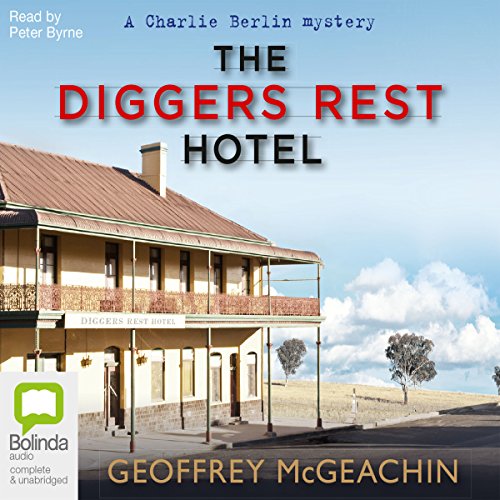 After World War II, young police detective Charlie Berlin fights off post-traumatic stress disorder. While on a murder investigation, he stops at the Diggers Rest Hotel. The body of a young girl appears in the back alley, and Berlin must tear apart this small-town world to get to the bottom of this heinous crime. Australian actor Peter Byrne embodies this tough but self-doubting detective. His serious tone suits postwar Australian themes. Fans of this engaging audiobook will be glad to know that it is the first of the Charlie Berlin mysteries.

In 1947, two years after witnessing the death of a young Jewish woman in Poland, Charlie Berlin has rejoined the police force a different man. Sent to investigate a spate of robberies in rural Victoria, he soon discovers that World War II has changed even the most ordinary of places and people. When Berlin travels to Albury-Wodonga to track down the gang behind the robberies, he suspects he's a problem cop being set up to fail.

Taking a room at the Diggers Rest Hotel in Wodonga, he sets about solving a case that no one else can - with the help of feisty, ambitious journalist Rebecca Green and rookie constable Rob Roberts, the only cop in town he can trust. Then the decapitated body of a young girl turns up in a back alley, and Berlin's investigations lead him ever further through layers of small-town fears, secrets and despair.The first Charlie Berlin mystery takes us into a world of secret alliances and loyalties - and a society dealing with the effects of a war that changed men forever.

Would you consider the audio edition of The Diggers Rest Hotel to be better than the print version?

NOT AT ALL, bring back Peter Hoskings! It is painful to listen to - like he is reading a shopping list. Had to stop and read actual book, ruined it for us.

Character is great, facts about Melbourne back then.

Just find someone who has a better reading voice. Someone who cares. Peter Hoskings!

Geoffrey McGeachin won the Ned Kelly award for this story.

I found the story of a pilot from WW11 returning to the Victorian Police Force interesting.
The story line is different, could it be original?

Just how Charlie Berlin trod the line as a policeman from Melbourne investigating a series of crimes, and, could engage the respect and interest of some of the townspeople and still get his job done was very well portrayed.

This is not a fast and furious romp like McGeachin's earlier stories. The humour is there though, coming as far more natural, where most people know most things about most people in the town. The book. while not a comedy does explore Berlin re entering life. He gets the job done too.
I expect this story to linger in my mind for a long time and well worth a second listen.

What made the experience of listening to The Diggers Rest Hotel the most enjoyable?

Back to the old days

Charlie - down to earth, common sense and willing to take people as he sees them

Yes - but with over 8 hours a good listen when commuting

What did you love best about The Diggers Rest Hotel?

Two years after witnessing the death of a young Jewish woman in Poland, Charlie Berlin rejoined the police force a different man. PTSD has him swimming in whiskey and he's n the ropes with his boss. Sent to investigate a spate of robberies in rural Victoria, he soon discovers that World War II has changed even the most ordinary of places and people.

I enjoyed the relationship between Charlie and Rebecca. And Geoff's humor.

What does Peter Byrne bring to the story that you wouldn’t experience if you just read the book?

A strong Oz accent - LOL! Peter's voice and accent breath life into the tale from down under/

If you could rename The Diggers Rest Hotel, what would you call it?

An engrossing and entertaining Aussie thilller and detective story whitch was strangely satisfying. Sort of an adult Biggles book.

Definitely worth your listening time

Excellent! This novel is set in a rural area of Australia just after WWII. Charlie Berlin was the bomber pilot who is shot down and sent to a concentration camp in Poland. Eventually he returns to his job as a detective. He has terrible nightmares and daymares, but he perseveres in his investigation first of bank robberies and then of a murder. The cast of characters is great, the sense of place is great and the plot interesting. The narrator has a distinctive voice for each major character and does an excellent job. Well worth your reading/listening time.

Better than I expected!

I'm not normally a fan of stories heavily focused on war - and the memories of WW 2 are essential to this story and the characters. But the story was intriguing and well-told and the narration was outstanding. I'll definitely read more in this series. Great characters and something a bit different from all the routine mysteries out there - well worth a listen!

I am so tired of tolerating casual bigotry

So yes this is supposed to be a period piece, and it may reflect the times but I do not want to hear a casual reference about “nigger brown” shoes or how she must be a lesbian because she wears pants. If you want to write about it the author has to have some acknowledgement that that level of ignorance is just not acceptable. I returned it cause I won’t pay for hatred.

I find it's hard for the historical novels to keep my full attention because I'm waiting for the story; however, this book had a great balance between history and story.

This book caught me by surprise as I knew nothing about it or the author. The story kicks off quickly and the mystery isn't one of the convoluted ones that populate the majority of today's books. the characters are endearing and the time and places well described.

The narration us clear and concise and the reader does a good job with the accents and pacing - a few of the books I've listened to recently have been read with such slowness that it's been jarring to listen to them at times, which isn't the case with this book.

Charlie Berlin is a burned out veteran of WW2 with PTSD and a drinking problem. He is also a great cop! Sent on a special mission to investigate a series of armed robberies in a neighboring district he finds himself in the middle of a strange situation and has few people to trust. Obviously he solves the crime and gets the girl - he is the main character after all. Along the way he has some great adventures and we learn a lot about his inner thoughts and gain insight into the trauma of war. Well done and well narrated. I would have left out the one sex scene though. It was not necessary to further the story and was not very believable anyway. Would have given 5 stars without it.