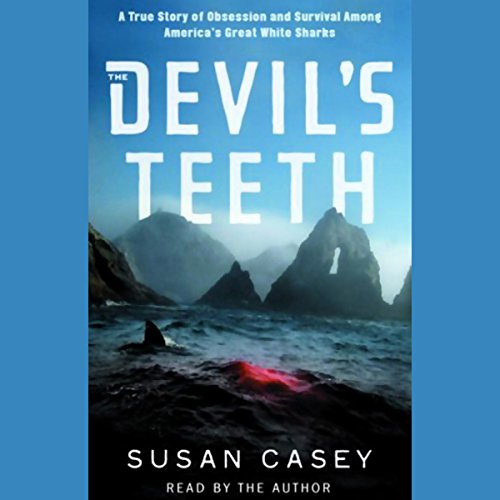 Travel 30 miles north, south, or east of San Francisco city hall and you'll be engulfed in a landscape of thick traffic, fast enterprise, and $6 cappuccinos. Venture 30 miles due west, however, and you will find yourself on what is virtually another planet: a spooky cluster of rocky islands called the Farallones.

Journalist Susan Casey was in her living room when she first glimpsed this strange place and its resident sharks, their dark fins swirling around a tiny boat in a documentary. These great whites were the alphas among alphas, the narrator said, some of them topping 18 feet in length, and each fall they congregated here off the northern California coast. That so many of these magnificent and elusive animals lived in the 415 area code, crisscrossing each other under the surface like jets stacked in a holding pattern, seemed stunningly improbable and irresistible. Casey knew she had to see them for herself.

Within a matter of months she was in a 17-foot Boston Whaler, being hoisted up a cliff to face onto the barren surface of Southeast Farallon Island, part of the group known to 19th-century sailors as the "Devil's Teeth". There she joined the two biologists who study the sharks, bunking down in the island's one habitable building, a haunted, 120-year-old house spackled with lichen and gull guano. Less than 48 hours later she had her first encounter with the famous, terrifying jaws and was instantly hooked. Curiosity yielded to obsession, and when the opportunity arose to return for a longer stay she jumped at it. But as Casey readied herself for shark season, she had no way of preparing for what she would find among the dangerous, forgotten islands.

The Devil's Teeth offers a rare glimpse into the lives of nature's most mysterious predators, and of those who follow them. Here is a vivid dispatch from an otherworldly outpost, a story of crossing the boundary between society and an untamed place where humans are neither wanted nor needed.

What listeners say about The Devil's Teeth

Casey's ability to take you out of your head and alongside her on her adventures seeking facts is incredible. You will feel that you are at the Farallons and with the sharks and waters around them. Her investigative story telling is morbidly and endlessly fascinating, and her humor has a wicked bite.

enjoyable but this was my first encounter with an abridged version. it's not cleverly done. they just chop out hunks, leaving you confused.
the story is OK. long parts are not about sharks but you feel her enthusiasm.