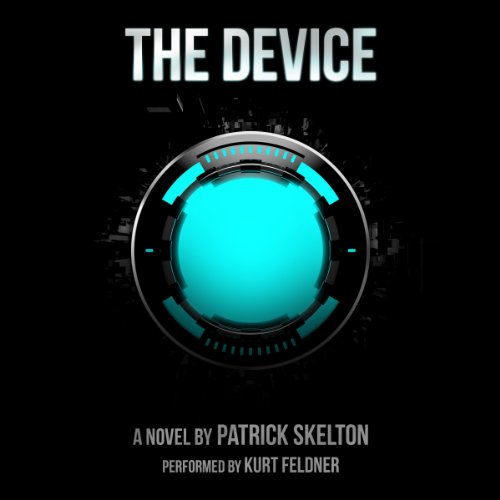 A troubled man's quest to uncover the secrets of his past leads to a chilling discovery. Tormented by guilt after the death of his fiancé, John Timmons lives life in a fog, retreating to his mountain cabin after work. While out hiking, a reflection catches his eye and he spots a small object sitting on a log in a nearby river. After a torturous journey down a ravine, he retrieves the object. It is mostly unremarkable but is engraved with the strange phrase "Project Daf Yasfhat." From this moment forward, John's life and those around him are never the same.

The reviews are correct...listen to this book!

Would you consider the audio edition of The Device to be better than the print version?

I didn't read the print version. This version is wonderful however.

John TImmons truly grows on the listener, and you end up caring for him, his life and family, and what happens to him really does matter. That alone is unusual.

What does Kurt Feldner bring to the story that you wouldn’t experience if you just read the book?

The day to day experience of living with the device, and the drama of learning more about it.

Life is Rarely as it seems .

This is a remarkable audio book. In my top 10 of the year. Never quite knew where they were going with the story, and a satisfying resolution. HIGHLY recommended, and big call out to the other reviewers who moved me to grab it. Well, WELL worth the credit, and the time.

Would you listen to The Device again? Why?

Yes I would listen again. The story kept me on the edge of my seat waiting to hear what was coming next.

It sure did! The plot took unexpected turns and I could relate to the characters. I was emotionally connected.

Have you listened to any of Kurt Feldner’s other performances before? How does this one compare?

This is the first performance of Kurt Feldner I have listened to. I will definitely listen to another! The way he changed his voice to match the characters was amazing. I could picture each person in the story visually according to the voice change.

I would have loved to listen to this book in one sitting but due to time constraints I was unable to do so.

With this being the first audio book I have ever had, I was impressed. I would love to have a sequel to this book with Kurt narrating. I loved the book and would highly recommend this to everyone. I look forward to more books written by Patrick Skelton and narrated by Kurt Feldner, they make a great duo.

What made the experience of listening to The Device the most enjoyable?

I really found myself getting involved with the characters. While the main character definitely experiences some rough patches, it was nice to be there with him as he discovers how all the different pieces of his life fit together. The story pulls you along quite well!

My favorite character is Sam. I especially liked the narrator's vocalization of him. It was different than I had heard him in my own head when reading the book, but it gave him more character.

What does Kurt Feldner bring to the story that you wouldn’t experience if you just read the book?

When I read the book, my interpretation of the main character had a lot of dry humor and sarcasm. The narrator instead imparted more of a sense of wonder, amazement and confusion than I originally sensed. It was a neat thing to see how the same body of work could be viewed in a different aspect, yet neither way is incorrect.

Yes, although I couldn't. I also plan on going back and listening again with headphones. I played this over the stereo in my car & had a difficult time hearing some of the narration because of road and cabin noise. Being someone who appreciates fluctuation and dynamics, I think this a good thing. However, it is something to be aware of if you haven't listened to this audiobook yet.

The only thing that kept me from giving a 5 star rating is the fact that there is little to no pause between chapters. For the most part, this is not a huge deal, but as the end of chapters tends to be where big changes or cliff-hangers occur, it can sometimes detract from the dramatic effect that was originally intended. Other than that, great story and great audio!!

What did you love best about The Device?

John Timmons is a man haunted by guilt over the death of his girlfriend, something he blames himself for. He is a very troubled man, with a sad past, medical problems and seems old before his time at only 24.

Whilst hiking in the mountains, John sees The Device on a log, in a ravine. After clambering down the retrieve it, he is still at a loss to know what it is. It is only the size of a mobile phone, and the only thing on it is a small hole, and the engraved words “Project Daf Yasfhat.” What is it, and what does it do?

As the story unravels, his romantic relationship with co-worker Lisa evolves, and he meets Jacob, a mysterious man, who is not all what he seems.

This is a captivating story in which all the pieces knit together nicely at the end, as John’s sad childhood, hidden pieces of the jigsaw, and unspoken memories are revealed.

The science-fiction element of this book is cleverly weaved into the very fabric of the story. It was intriguing to listen to, and the narrator, Kurt Feldner, has a very warm and engaging voice.

Would you listen to The Device again? Why?

Sure, I probably would. There are a lot of things that I didn't pick up the first time through.

It didn't keep me on the edge of my seat the entire time, but a good portion of the time I was excited to find out what happens next. The main character has a lot of life baggage, therefore he could be unpredictable at times.

Have you listened to any of Kurt Feldner’s other performances before? How does this one compare?

This is the first book that I've listened to that he has narrated. Overall, a solid performance. Many times I caught myself forgetting that I was listening to a book, and was immersed in the emotion of the story. I was specifically was impressed with the narrators ability to flip back and forth between characters.

A young man fights to learn of his past while dealing with the troubles of the present.

Solid performance and solid storyline. The story wraps up nicely, and overall an interesting story. Well done by the author and narrator.

What would have made The Device better?

This book is not really a sci-fi story. There's no sci-fi in it until the final sixth. I honestly have no answer for why this book is so highly rated.

The reader was fine, the production was horrible.

If you could play editor, what scene or scenes would you have cut from The Device?

I would have completely changed the story and emphasized the sci-fi elements. I would take out the anti-environmentalist theme. It makes the author seem like a dolt - he also needs to review his understanding of physics and medicine.

Audible needs to take this book off its recommendation list. It is really not up to snuff.