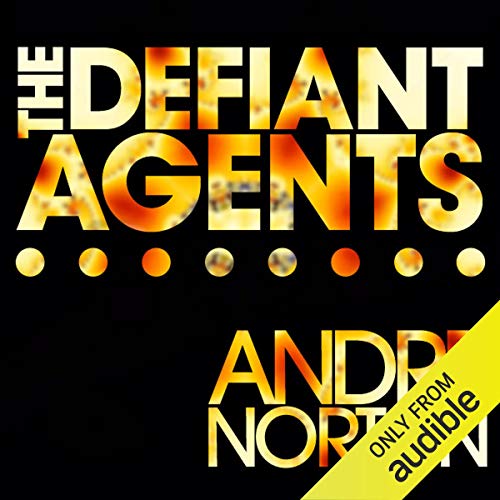 Andre Norton made a lasting mark on the 20th century's fantasy and sci-fi scene. This is especially impressive considering that Norton, whose given first name was Alice, was writing in a male-dominated genre. The Defiant Agents follows up on the time traveling adventures described in the "Forerunner" series. Flavored by Cold War sensibilities, this audiobook takes listeners to distant planets where Apache volunteers are sent on a government mission.

Paul Boehmer, a 2003 Audie Finalist, brings a pulpy enthusiasm to his performance. In a voice both classic and "action hero", Boehmer's dramatic mastery of dialogue is especially compelling.

Alien technology scavenged by U.S. and Russian scientists has started a race to colonize planets outside our solar system - and the U.S. scientists are losing. In a desperate move the U.S. government decides to use a group of Apache volunteers in an experimental attempt to colonize a primitive planet, but before they can even begin their spaceship crashes on the planet Topaz.

What listeners say about The Defiant Agents

This is a pretty awesome tale of American Indians and Mongols, in space. They find themselves in the grip of technological superior humans. This is the story of how they jointly grasp freedom.

Not one of Norton's best stories

The Defiant Agents is the third book in Andre Norton’s TIME TRADERS series about a secret United States government program that uses time travel to solve geopolitical problems, especially those involving the Cold War with the Russians. In the first book, The Time Traders, we met Ross Murdock, a criminal who avoided his sentence by signing on with the Time Traders and discovering the source of the Russians’ new powers. In the second book, Galactic Derelict, we met Travis Fox, an Apache who joined the Time Traders and was sent to recover an alien spaceship.

In this third book, the United States has tossed all ethics out the window and decided that the end justifies the means. They’ve used a process called Redax on Travis Fox and some other unknowing Apache volunteers which causes them to forget their modern selves and embrace their inner Apache. The government sends them to a newly discovered primitive planet where they hope the Apaches, now channeling their ancestors, will be able to subdue it. Meanwhile the Russians have used the same process on the descendents of the Mongols and sent them to the same planet. Thus we have a U.S. /Russian war being fought between Apaches and Mongols on a distant world.

Sounds a little silly, but if you can get past the premise (which I had trouble doing), you’ll find a story containing the kind of action and angst that Andre Norton’s fans love. There are even telepathic wolves, which is really cool. This is not one of Norton’s best stories, however. It doesn’t at all feel organic and, with the exception of Travis Fox, the “Reds” and “Mongols” are simply stereotypes. It feels more like Norton wanted to write a story about Native Americans in a science fiction context and, indeed, I’ve read in several places that this book was written after one of Norton’s friends complained that there were no science fiction books where Native Americans were the protagonists.

I’m looking forward to book four, Key Out of Time, which again focuses on Ross Murdock. I want to find out about the advanced alien race that may be providing technology to the Russians.

All of the books in the TIME TRADERS series are now in the public domain and can be found for free online. I bought the free Kindle version and then used the Whispersync deal to buy the audio version with Paul Boehmer’s narration for $1.99. I’d recommend this version if you want to read The Defiant Agents.