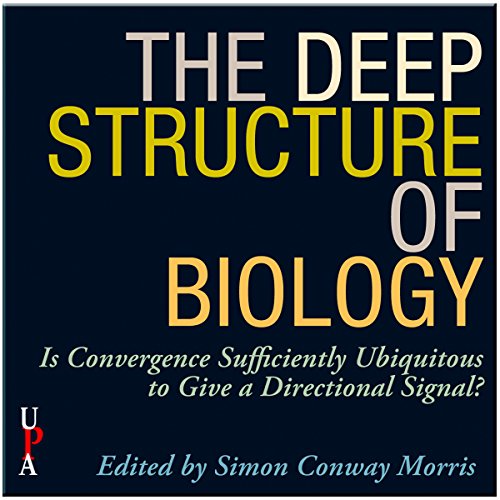 The Deep Structure of Biology

Is Convergence Sufficiently Ubiquitous to Give a Directional Signal
By: Simon Conway Morris (Editor)
Narrated by: Philip Sondericker
Length: 9 hrs and 8 mins
Categories: Non-fiction, Biology
2.5 out of 5 stars 2.7 (3 ratings)

The Deep Structure of Biology

Twelve renowned scientists and theologians offer penetrating insights into the evolution dialogue in The Deep Structure of Biology. Each considers whether the orthodox model of evolution is sufficient and offers his/her own perspective on evolution and biology. Essays include:

The discussion of biology and evolution in these essays broadens the scope of the traditional evolution discussion as it aims to stimulate the development of further research programs. Scholars in the science and religion field will find this book a valuable resource.

"Conway Morris has assembled a powerful collection of arguments that effectively challenge the nondirectional, random view of the evolutionary process. Highly recommended." ( Choice)

Conway Morris is probably the finest biologist working today. I am not a scientist, so I had hoped that an audiobook version of his collection of essays would be easier to work through. Some fascinating and stimulating ideas. I am glad I persevered, and I learned a lot. But why on earth was it read as though to imitate a computer programme - even at the end, my ears could not fully believe that the reader is a human being.

Not an introduction, otherwise well worth engaging

Yes. Check out this reader if you are already familiar with the basics of convergent evolutionary theory. This is not media storm material. It is a compilation of essays contributed by expert biologists and philosophers of science about their respective research. Complementary schematics for interpreting compelling data less and less at home in a purely materialistic, Stephen J. Gouldinan chance/mutation paradigm. Be prepared to learn about morphospaces, a periodic table of life, and Wolfhart Pannenberg's proposed emendation of Aquinas's understanding of nature and natural theology. All in all a good representation of current research working from a convergence theory foundation.

The only possibility for how this is so impossible to listen to is that the narrator practiced his robot voice before recording. I have suffered through some awful narration but when I say robot voice I mean (this is not a joke) Stephen Hawking is slightly less robot and Siri seems downright human by comparison. It must be intentional.

It's a shame because there were a few premises I tried to follow during the first hour or so, then skipped ahead, and again, to see if it was just the narrator's first time reading out loud (as is sometimes the case I think) and might get better, but no.

I have seen people be way too hard on narrators and that bugs me, but please trust me and do not even try.