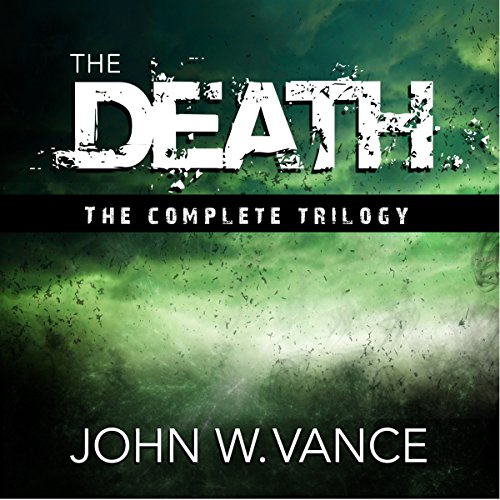 The Death: The Complete Trilogy

All three audiobooks under one cover!

The Death will find you.

It took just a few weeks for a plague called the Death to wipe out over 90% of the world’s population. Those who survived thought themselves lucky until the world that remained came into stark relief. Devin Chase, a writer by trade and urban dweller sits in his apartment in New York unaware that his fiancé is the first victim of a worldwide pandemic called the Death. Upon learning of his fiancé’s condition he sets out to find her. Unprepared and unsuccessful he barely survives the initial days and takes refuge in a secluded barn. After six months he emerges from his self-imposed quarantine to find that over 90% of the world's population is dead. With no knowledge or skills he must learn and adapt as he goes. As he travels, he discovers others like him who are immune but he must also confront that the world he knew is gone. It has been replaced with a savage and brutal one where the only rule is "kill or be killed."

A thousand miles away, Lori Roberts, a mother of two, wife, and successful businesswoman must tackle the harsh realities the Death has imposed. Within weeks of the outbreak, her family is quarantined at a FEMA camp. At first they believe the camp is their sanctuary, but soon discover something entirely different and sinister is happening to the survivors. Two people, two survivors but one ultimate outcome. They survived the Death but will they survive what the world has become?

What listeners say about The Death: The Complete Trilogy

the narrator is amazing as always, however.

The book set started off strong. The narrator was amazing as always... however... The last book was rushed and was just not a good ending. It feels as if the author got bored and just put together what he hoped was a bunch of good plot twist. It wasn't. This last book ruined all of the time and effort placed into the first 2 books.

The book was slow and very predictable. The characters were dumb. Save your money everyone dies

I enjoy a good pandemic book! I was a little disappointed in the lack of character development. We got bits here and there, but not enough to truly care what happens to them. The basis of the book was a bit cliche, but still well done. Narration was good even though the female voices were definitely strained. Ending was unexpected so I will give the author credit for that!

Spoilers! Basically this is a book about a false flag event conceived by an Illuminati style group that has infiltrated all levels of society and government. There’s a little good vs evil with a former member trying to stop the current plan from evolving. The story revolves around a couple of different sets of people set far apart, but yet connected. For instance, patient zero is the fiancé of the man who is with the fiancé of a captain at the base holding patient zero. Meanwhile the captain falls for a rather unappealing woman at the base (frankly, as a woman, there is nothing redeeming about her and when she finally realizes the error of her ways, it’s too late in the game because I had started to hope she would be killed off a dozen chapters prior), the fiancé of patient zero falls for the captain’s fiancé and in the end you have no idea who you’re ‘rooting’ for and as it turns out, it doesn’t really matter in the end. Anyway, it’s about their journeys and although interesting, I feel like we just got a surface story without a lot of depth to the characters. As an example, one of the groups runs into a 10 year kid and his merry band of the lord of the flies. Naturally, you start by really not liking this kid, then somehow we’re supposed to like this kid because now he’s helping, but we still don’t know a thing about him or where he came from or how he’s survived without adults thus far. So again, in the end, I didn’t really care about him throughout.

It was a fairly new concept of an apocalypse and very probable for the origins of the "virus". Makes you wonder. I think the mixture of the characters and the problems they encountered along the way were what I feel is highly likely in the case of this storyline. The reason why I didn't like it was that it had no "soul". The characters were shallow without the writer "showing" the emotions or giving much emotions to the characters. Almost like once established, the character's emotions and psychological impacts were taken for granted, not demonstrated and/or acknowledged for and by the characters. They say they are upset, devastated to the point of inability to go on, yet very little true reactions are consistently shown, only said. With that said, the narrator makes it worse by making everybody's tone of voice and inflections too ?cheery? I am certain there are moments of (somewhat grim) teasing and lightness even with the circumstances, but the lightness of the tones of the characters makes it all seem like a tough adventure. The narrators female voices are shrill and/or chirpy instead of an average female voice, especially in the circumstances of these characters' environment and circumstances. I do not think this narrator is a bad one but this genre is not for him with that upbeat voice and tone. Back to the writing, the female character, the architect, has a particularly nasty habit of thinking she knows everything and despite being pregnant and saying she needs to find safety for her child, continues to try to do everything the big Marine doesn't want her to do for her own safety. She is a bossy, know-it-all with a bitchy attitude, and the narration makes it worse. An intelligent, tough and resilient woman does not mean controlling, independent yes, or as much so as possible in the circumstances. This is a traumatic, shocking and evil event where survival is iffy at best...where are the character emotions and personal struggles and where are the emotions and impact of the circumstances? The story line is unique in my experience with this specific genre and I feel the book would have been fantastic because of it, but it was not a good read.

I cannot finish this. The narrator does not do well with women's voicing, they all sound whiney. This seems like a young adult book... It is predictable, dramatic in a "high-school drama" way, and does not offer the substance I need to continue listening. Several hours into the book, I have yet to discover a likable character. Very underwhelming.

Great read once it gets going

The story started off a little slow. But once it got going mid way through the 1st book I could not listening.

The The narration was fair neither poor or good just average. However the story is excellent the author does a good job of throwing in a fair amount of twist and turns in the storyline keeping you engaged and anxiously waiting to see what happens in the next chapter. The characters are well developed and will have you cheering for so in hating the others.

Over all I was not expecting much from this audiobook but I was pleasantly surprised by such a go read/listen. Getting all 3 books for the price of one was a pleasant surprise.

Amazing story and characters. It's somewhat dark but it really refects how I imagine humanity would react when facing the end of Human existence.

WOW!! Great story , very original, moved quickly, very descriptive but not over done. Surprised by the opening with comment by my favorite G Michael Hopf. Only negative from me would be that it needs to be redone with different narration. Hey John, can you send me an autographed hard cover? THANKS!!!

the story was pretty good however there was No Way the first "book" could even come close to being considered a complete book. had I bought the single book, i would not have purchased the rest. story picked up after book one. the narrator's voice was to high pitched for a serious novel. better for young adult story.

This set was a great deal for one audible credit. Hours and hours of entertainment. A certain amount of reality must be held back to follow along but it was fun.