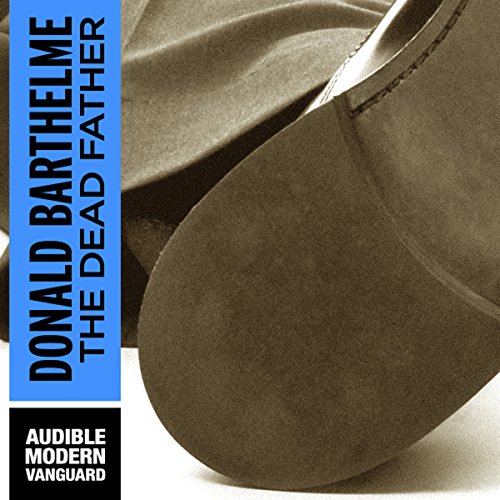 It's no easy task to bring to life the words of one of the most celebrated post-modern fiction writers who influenced a generation of novelists. When the focus of a story is on wordplay and sentence fragments as it is in Donald Barthleme's best work - including this short novel The Dead Father - it's all too easy for the genius to be lost in narration. But Dennis Holland rises to the challenge and succeeds. His technique? A matter-of-fact cadence, with a bit of playfulness that softly highlights the absurd. It's this hint of wonder in his voice that lands his aural rendering somewhere between a dedicated teacher reading aloud from a manual and the narrator of the Dr. Seuss movie classic How the Grinch Stole Christmas.

The Dead Father offers a world so absurd, that the absurdity is normal. The title character is a mostly-conscious, part-machine being who, though he speaks and acts and reasons, is, apparently, dead, and on one last journey. Fragments and simple sentences move the book along; everything is at once related and unrelated, as in this passage: "They continue to hold hands. And the Dead Father also gropes a bare foot with the hand that is not holding hands. Julie retracts foot. Thomas smokes. Events in the sky. Star falls, scattering in the dark part. Clouds moving implacably left to right. Offstage, toward the wings. Thomas smoking." And though the words alone may seem devoid of emotion, the novel ends in a heartbreaking scene - emotional because of the words and the events, but also because of the gentle narration that both pushes the narrative and floats along with its tide. Holland's performance of The Dead Father offers both an excellent introduction to a fiction master's work, and a fresh perspective for Barthleme devotees. - Kelly Marages

The Dead Father is a gargantuan half-dead, half-alive, part mechanical, wise, vain, powerful being who still has hopes for himself - even while he is being dragged by means of a cable toward a mysterious goal.

In this extraordinary novel, marked by the imaginative use of language that influenced a generation of fiction writers, Donald Barthelme offered a glimpse into his fictional universe.

This production is part of our Audible Modern Vanguard line, a collection of important works from groundbreaking authors.
©1986 Donald Barthelme (P)2009 Audible, Inc.

This story will rock your socks

IT is a fresh and exciting style. There is a book within the book about different kinds of fathers this includes the jumping father. IT was translated from the English to the English. There is also an outdoor sex scene that includes positionA. No animals are harmed in this book, but the dead father slays many cut outs.

I love this little book

When I was an undergrad, The Dead Father is the only postmodernist work I really understood and loved, and it helped me laugh at traditions of all kinds. I teach this novel in my classes now, and the students think it's like nothing they've seen before (if they can get past the antinomial cussing, sex, and "nudity" all of which are absurdly rendered). Yet there are heart wrenching themes about the problems fathers and sons face as they struggle to communicate or even just coexist. Barthelme continues to make me laugh and think each time I read it or any of his works. Still a great read, and the audio narrator adds an extra layer of absurdity and tenderness to the piece.

If prepared for post-modernist comedy, drive on!

If what you enjoy is a straightforward narrative told in straightforward prose, turn around now. Barthelme is unapologetically post-modernist in approach and outlook, and in the case of "The Dead Father," introduces a healthy dose of surrealism as well. The Dead Father is an enormous figure being dragged towards some little-explained destination. He's dead. But he's not. He is a symbolic figure, at times even a mythic figure--he creates a new god just by sticking one eye in a river.

Much of the book is snatches of dialogue, sometimes in clear context, sometimes nearly incoherent. Which is actually why it lends itself to the audiobook format, at least in the hands of a reader prepared to piece out which remark belongs to which character. Dennis Holland does a superb job of interpreting a very challenging text, and the listener owes him for his work in helping us through the work. The reading reminded very much of Nick Sullivan's outstanding reading of William Gaddis' "J.R.," and if you appreciate Gaddis' humor, you are well prepared to enjoy Barthelme's. There are moments of such wonderful wordplay and verbal juxtapositions that I burst out laughing.

While this isn't one of my top 10 audiobooks, it's one I'm very satisfied to have purchased and listened to.

Has The Dead Father turned you off from other books in this genre?

Yes I believe it has. I not even sure I know the genre

He was as bad as the story

If you could play editor, what scene or scenes would you have cut from The Dead Father?

I never ended up listening to the whole book. It was too much agony!