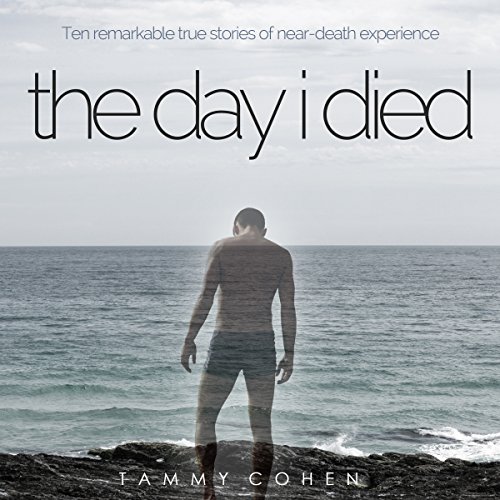 The Day I Died

By: Tammy Cohen
Narrated by: Simon Whistler
Try for £0.00

What happens to us when we die? Where do people go? What do they see? What messages do they receive? Why are they allowed to come back?

The Day I Died brings together ten profoundly moving testimonies from people who have passed through the limits of human endurance and beyond. Around the world, ordinary people go about their daily lives convinced they've had a glimpse into the afterlife. Their eyewitness accounts often share uncanny similarities, and this book does justice to this beguiling subject by analysing dramatic narratives and shedding light on a phenomenon at the crossroads of the medical and the mystical.

Tammy Cohen presents ten intriguing real-life accounts, including a man who 'died' on the operating table and awoke with increased psychic abilities, a victim of domestic abuse who had a life changing unusual out-of-body experience, plus stories from people who had 'drowned' and 'died' of heart attacks.

Powerful, challenging and endlessly fascinating, The Day I Died celebrates both pleasurable and distressing near-death experiences when death came calling, but left empty-handed.

What listeners say about The Day I Died

Yet another badly read story.

readers sounds like he's on drugs. is he trying to sing? met very few people that talk like him. He goes up and down in tone that's just annoying

I gave up on chapter 3 as I just got bored of this book. I might try agin next year, but for now. I just can't get into it. Narration was GREAT though!

Having just reach the age of 60 I am more aware of my own mortality. These accounts of near death experiences have taken some of the fear of dying away for me.

No corroborated information and syntax suggests all from the mind of the author. I believe in NDE and there are plenty of bona-fide works available but, I strongly doubt this is one of them. As for belief in this book the only requirement is the suspension of it.

I would advise listening to the audio clip before buying. I cannot stand listening to this narrator. I think it is a matter of taste. It puts me right off!!! He's probably a nice man. I have heard him before and just don't like the way he talks.

What did you like most about The Day I Died?

It covered a unique and interesting subject really well

I did not like Simon Whistler's performance, he has a slightly sing song type voice that is quite irritating and sometimes inappropriate. However the book it self was really interesting so this made up for the voice.

Great book, I will listen to it again sometime soon.

Once again another probably outstanding audiobook that may be entertaining that has to be shelved before I even get to unwrap. These Narrators are absolutely pulverizing what could be entertaining informational and heartwarming stories that are highly desired to listen to but can't because I can't understand a word the narrator is saying and his accent is taking away from the entire experience. I suggest subtitles are added to audible.

No one. I was expecting the stories to be carefully chosen highlighting different and interesting aspects of the near death experience. Instead, they seem almost randomly selected and the several we listened to lacked depth or much interest. The killer was the absolutely terrible voice narration. That sealed it and my wife and I abandoned listening to the rest of the book after chapter 5.

The book is a series of stories fronted by an overly long introduction. So there is no ending per se that I can comment on. Although I should add that we abandoned hearing the stories after the 5th chapter.

An awful, sing-song voice narration that varies very little from story to story and character to character greatly detracts from this otherwise interesting topic. The voice actor doing this narration so wrecks this book that my wife and I both abandoned hearing the rest of it after enduring 5 chapters on a car trip. I have never posted a review on an audible book before but I wanted to warn others who might make the mistake of ordering this.

I had a hard time listening to this book. The narrator reminds me of a news reporter.

Would love to listen to this book again and again. It is therapeutic for the home sick. I loved it.

Updating my review after a 2nd, 3rd, and 4th listen. The first listen left me having trouble relating to the stories that applied to women with a male telling their stories. Now, I am looking for more books narrated by this guy. I have discovered his ability to inject entertaining humor into these stories like no other. Truly, if I'm being honest, I actually listen to this book more than 4 times. Can't say that about many books.

This book has made me feel somewhat more at peace with my parents death. It seems as though it is not necessarily a religious experience. It seems like everyone who shared their stories were from many different backgrounds.

Loved it, gives so much insight to the next steps.

Loved it, didn't want to stop listening. disappointed when it ended. I find NDE fascinating.