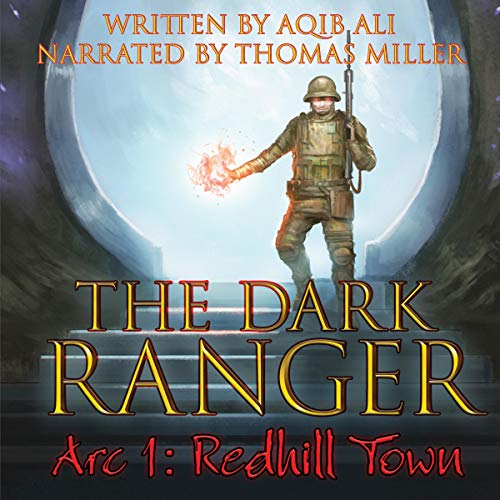 When the population of Redhill, Arizona completely vanishes without a trace, it falls to Ray and his fellow Rangers to uncover the truth. The Rangers are an elite unit of self-sufficient soldiers working for the Supernatural Defence Force. Their mission is to investigate the town and figure out where the townsfolk have gone.

Their quest is derailed when they discover something strange in the silent town. What was once a thriving community in the now desolate wasteland, a lone candle flickers in the darkness of the old monastery. Who is the stranger that lurks behind the candlelight? Together, Ray and his fellow rangers must unravel the mystery. Will they uncover the truth or fall victim to the same fate as the townsfolk?

The thrilling dark fantasy tale continues as the SDF rangers prepare to investigate the network of ancient tunnels beneath the soulless remains of Redhill Town. Victor uncovers more secrets of his past life as Ray the human turned vampire learns to nurture his newfound dark powers.

As the SDF prepared to mount their offensive they are ambushed by the evil forces of the demonic mage. Will they survive or fall victim to their enemies?

Crammed-packed full of Guns, Vampires, Elves, Demons, and even a few of Vikings, there’s a lot to like in Aqib Ali’s Dark Ranger. The plot & characterization will appeal to those familiar with the classic Fantasy Quest and I found the story engaging.
If I had gripes, they would be that, some of the story is played out directly rather than, perhaps the words, feelings, and senses of the characters and I found myself following the action rather than becoming emotionally invested in the characters themselves.

That said, it is a solid fantasy ‘knock about’ and definitively great fun!

A really entertaining story, hooked me right from the start. Nicely written and very well narrated. Looking forward to more tales of Viktor and the SDF. Cheers, IanFW

This first entry into a new series has potential. Needs a little editing done on the duplicate vocals. Loved Victor, hope to see more of his involvement in future releases.
This audio was given to me free and I voluntarily gave this review.

I enjoyed listening to this book. It was a little contrived and the demons were one-dimensional. Still, I was entertained and I am curious about what is to follow. I thought the narrator did a decent job. He needs to work on his female voices. I was given this free review copy audio book at my request and have voluntarily left this review.

An odd mix of genres to be sure. Paranormal, yes, but what else?; is it fantasy, sci-fi, or horror? The writing is erratic, jumping from one point of view to another. The transitions are certainly not smooth. The core of the tale has potential but it’s unclear where it’s headed. Perhaps with more time and study. I was given this free review copy audiobook at my request and have voluntarily left this review.

I was provided a free copy of this book to read in exchange for an unbiased expression of my opinion.This is my review of The Dark Ranger.

The story has potential but It is pretty rough and seems to lack fluidity.   I  tend to like contemporary fantasy books and i also like  vampire books. This book fits into that nich. It is not terrible but it just doesn't do anything for me.

The reader has a nice  enough voice. He  does individual character voices. Some of which i found pretty jaring especially his version of  women's voices. Ultimately it's not a bad book just needs some polish.

Not well written and the narrator is reading the story as if it's as boring ... well ... as it is.