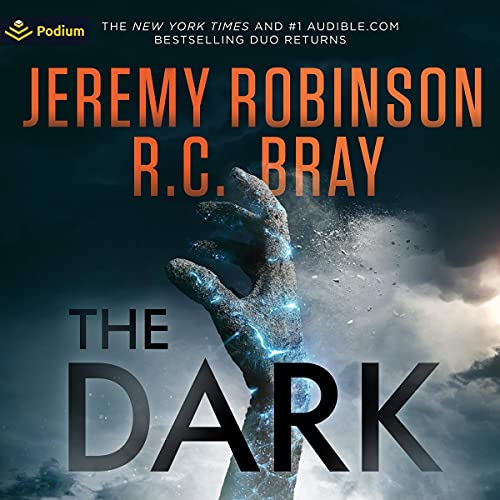 From New York Times and number one Audible best-selling duo Jeremy Robinson and R.C. Bray comes a horrifying revelation about the centuries-old Three Days of Darkness prophecy, during which the legions of Hell will be unleashed on Earth....

There shall come over the whole Earth, an intense darkness lasting three days and three nights.

Miah Gray is a 27-year-old former army soldier living in rural New Hampshire with his sister, mother, and her boyfriend. He is plagued by PTSD, finding solace, but not redemption, with the aid of prescribed cannabis. All he wants to do is get high, relax with a good sandwich, and watch a meteor shower with his neighborhood crush, Jen.

He who opens his window or door out of curiosity, or leaves his home, will fall dead on the spot.

When the sun's light is blotted out the following morning and the world is plunged into darkness, Miah finds himself locked down with his family, covering windows with trash bags, lighting candles, and following the arcane rules of an ancient prophecy. But there is no escaping what comes next.

The air will be infected by demons, appearing in all sorts of hideous forms.

A brilliant flash of light fills the sky, leaving Miah changed and an Old Norse death rune etched onto his forehead. He fears he has been marked for death until the neighborhood's parents start disappearing and he's left behind. Leading Jen and a ragtag group of parentless kids, Miah hunts for answers and for their parents while trying to keep his sister safe. He charges headlong down a path that will take him to the gates of Hell...and then straight through.

All of Hell will be let loose.

The Dark is a mind-bending, character-driven sci-fi-infused horror novel like no other.

What listeners say about The Dark

Can’t believe this is promoted as a New York Times number one best seller; more like the National Enquirer.
Utter gung-ho American rubbish. One of the worst books I’ve completed which is really only due to R.C.Brays excellent narration.
Jeremy Robinson definitely one for me to avoid.

loved the book has a great story . could not stop listening to it once I started

I will listen to anything R C Bray reads as he is just an outstanding narrator. I loved the book as well. Looking forward to listening to more from this author.

Good story, the outtakes were hilarious.

A good listen with a bit of banter and fantastic outtakes at the very end of the audiobook. R.C. Bray is a legend of a narrator but the story was good too.

Thoroughly enjoyed from start to finish. The pacing was great, the twists and turns, the characters.

Faultless performance from RC Bray as to be expected.

Nicely tied up at the end too, but added just enough for a sequel. Fantastic.

Jeremy has done it again

First got into JR (not the Dallas JR) with The Last Hunter which was great and now The Dark a brilliant explanation of mythology as Arthur C. Clark said any advanced alien race would appear like magic to us (not an exact quote but you get the meaning) so it is not that unbelievable that our ancient ancestors would explain advanced alien science as magic. Keep writing Jeremy and I will keep reading or at least listening.

thanks for the out takes at the end too. that was a nice touch :)

Easily, the best audio listen I've ever had.
The narrater is flawless, giving an outstanding performance
It's quirky, funny,harrowing and a real sense of weight and grit. loved it!!!

Loved it! A thriller ride of a book, complete with death, gore, and humour!

I could tell you…

Buy The Dark. Trust me.

So Dark, with elements of light and awe.

I am so impressed with this title. I have listened to several books narrated by R.C. Bray, including all of “the shiny beer can,” series. This is only the second book I’ve listen to by Jeremy Robinson, (the first was Dark Horse Rising). I am astonished at how this book hit me. I’m a veteran with PTSD from my time in Iraq with the US Marine Corps. in 2003. 18 years later I still carry with me scars from this time my life, and the way Jeremy Robinson is able to write about this connected with me on an authentic level unlike anything I’ve ever read or listened to. If you want a great book, this is it. If you want something more, like the insight behind what a life struggling with PTSD could feel like, this book may connect with you the way it has me.

The Dark is a game changer folks. This is one of the best books I’ve ever listened to. Definitely worth a credit, don’t hesitate, listen to this book today.

more greatness from to fantastic people. Jeremy your mind never disappoints me. love it!!! Bray you have a way with words I can't get enough.

Great story the author may have some unresolved issues but it works in our favor! Book is brought to life through the narrator R.C. Bray. The Dark is now, one of my favorites. Thank you and please keep doing what you do.

This story was nothing like what I thought it would be. In a good way! I was afraid it would be overly religious considering its subject matter. But it was an awesome sci-fi/horror story with a lot of heart.

There are many reasons why I enjoy Jeremy Robinson’s books, but tops has to be how well the characters are written.

Wow! I enjoyed this book so much. It was one of funniest scary stories I have ever read. I laughed out loud in some places and I scrunched up into a ball from fear in other places! It was rather like being on a roller coaster in the first car with no safety rail!
The narration was well done and the story was terrific! Thanks to all who helped accomplish such an intriguing and delightful story.

I love this book, I need it injected in my veins. It’s such a great adventure.

Dark -but thoughtful and funny

How do you write a review about a book so jam-packed full of "yeet"? You'll laugh at that later. Robinson takes us on a rollercoaster ride as we laugh, cheer and say, "ew, gross". Lots of gross in a few spots there, but there's a chihuahua, a guy in a skirt and a badass seven year-old girl who is also kind of creepy, but in a fun way. If you've never read a book by this author, get busy listening. If you have, you're probably already a fan and are maybe waiting on an invitation. I invite you to listen and get lost in the transformation of one neighborhood plunged into the Dark.

Jeremy Robinson and RC Bray are both at the top of their game in this one! Opens with a great hook and keeps you on the edge of your seat the whole time. You never know what’s going to happen next. It’s also one of the funniest books I’ve ever listened to! I can not wait for the next one!

It’s unfortunate to see that so many people will give mediocre books like this high ratings. I can see how some people would find this book very enjoyable but I’d encourage people looking for an excellent book to look elsewhere.