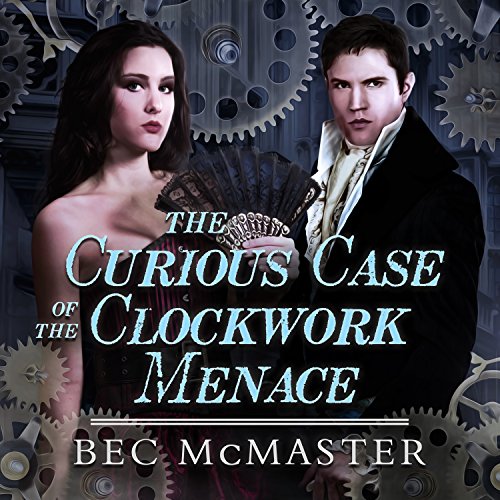 The Curious Case of the Clockwork Menace

In a Victorian London ruled by the blood-drinking elite, Perry Lowell is a logical and accomplished Nighthawk: a rogue blue blood who tracks murderers and thieves for the Guild. So when she and her charming but reckless partner, Garrett, are charged with finding a missing theater starlet, it should be a simple solve. But with an entire theater of suspects, including a flirtatious understudy, and whispers of a Clockwork Menace haunting the place, tension is brewing between the pair of them. Can they come together to solve the case - or will it be too late when the murderer turns his gaze on Perry herself?

What listeners say about The Curious Case of the Clockwork Menace

Really loved this short Perry/Garrett story and it has me really looking forward to Forged By Desire to get their story! This one was set before the events in My Lady Quicksilver as Garratt's craving virus seemed to be normal and there was no mention of Rosa. It's interesting to learn that Perry has been crushing on Garratt for so long and I can't wait to see how they work things out!

Good to wet the appetite.

I look forward to Perry and Garrett's main story. This was just an appetizer for their story. The romance is light in this story, but I imagine Bec McMaster is waiting for the next book to get to the juicier details. This story took place somewhere between 3-5 years before Forged in Desire. Normally I not a fan of unrequited love stories, this book focuses more on the mystery than the romance. I think this can be a standalone book, but it would be easier to understand Bec McMaster's steampunk world concerning the bluebloods, mechs, and echelon if you read the other books first, although this book is before all of the others time wise. Narrator does a pretty good job.