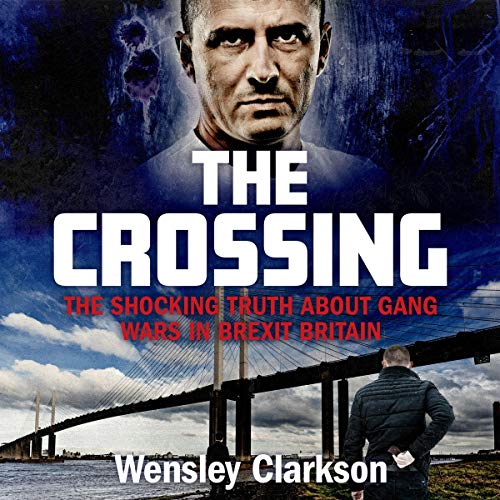 By: Wensley Clarkson
Narrated by: Jo Dow
Try for £0.00

The Crossing is a groundbreaking, unprecedented look inside the UK's newest and most chilling underworld. Wensley Clarkson's insider account reveals the emergence of numerous organised crime networks more powerful and violent than anything ever seen before in this country. These often foreign gangs run elaborate international systems dealing in drugs, people smuggling, prostitution and money laundering, and they have gained a huge foothold in the UK underworld thanks to The Crossing.

Since first investigating organised crime more than 30 years ago, Clarkson has witnessed enormous changes in the UK underworld. For The Crossing, he has entered the brand-new Brexit influenced criminal badlands and witnessed up close the audacious, sophisticated and far-reaching foreign gangs who threaten to paralyse post-Brexit Britain by introducing the world to a new breed of organised crime.

What listeners say about The Crossing

Having lived in Essex all my life, 50 years, and being a European truck driver for 20 of those, this book is not only a frightening eye opener, it just confirms a lot of what I have ‘seen’ especially the this last 10 years.

A very compelling listen, and exceptional narrating, my book of the year so far.

I could probably say more, but probably best not too.....

OK but not grrat

The story was fairly humdrum and trotted along but at no great pace and was mundine. The narrator was reasonable, though I'm not sure why he tried the accents of people that he was pretending to be. He often tried an eastern European accent which usually sounded poor and often tailed off and disappeared altogether. Given that he was speaking only three or four sentences for that person, it would have made more sense if he had simply carried on in his own voice and said will needed but without trying to affect the accent. It also seemed as a whole to be fairly bloated and take too long. For example, the crossing was explained at the outset as being the so-called Bermuda triangle at Kent, Essex, and London. And this was covered by the Queen Elizabeth II bridge. However, following this explanation, the name of the bridge and the locations of the crossing were constantly repeated when they didn't need to be. it was ok at best and whilst I would listen to another one, I wouldn't miss it if I don't and I probably wouldn't buy another by this author

this book will make you wish you voted brexit

wow! what an eye opener
truly excellent book everyone should read,
narration is superb, full of interesting stories, hard to put down.
search Westminster Bridge scammers, just the tip of the iceberg

Decent book as are most of WC books. About time someone mentioned how the government and police have no idea how to handle foreign gangs in this once Great Country, seen as tho the MSM fail to ever mention it.(not sure why he tried to blame brexit at the end tho)

This guy hasn't even done his basic homework. His descriptions of the area around Dartford are so wrong it's incredible I just can't believe that anybody who lives in the local area would believe this is true. His description of council tower blocks overlooking the crossing are just wrong because they don't exist. Coupled to this there are many other factual errors. Don't waste your money.

Great insight into the downfall of Britain

If true then an utterly shocking and good insight into the criminal underworld in the United Kingdom. Nothing surprises me anymore the police need to grow a pair and get on with dealing with this and not the rubbish they focus on !

What a really true insight to the underground drug cartels in London and Kent. Truly shocking but also enlightening. Very gripping all the way through.

I truly believe a lot of this book is absolutely bullshit having known people for many years who work in this industry it does not seem to be on reality.