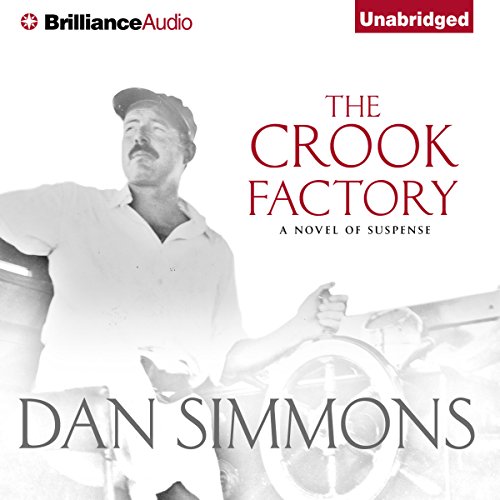 At the height of World War II, the famous writer Ernest Hemingway sought permission from the U.S. government to operate a spy ring out of his house in the Cuban countryside. This much is true... It is the summer of ’42 and FBI agent Joe Lucas has come to Cuba at the behest of J. Edgar Hoover to keep an eye on Hemingway. The great writer has assembled a ragtag spy ring that he calls the “Crook Factory” to play a dangerous game of amateur espionage. But then Lucas and Hemingway, against all the odds, uncover a critical piece of intelligence - and the game turns deadly.

In The Crook Factory, award-winning author Dan Simmons expands a little-known fact into a tour de force of gripping historical suspense set in the sensual Cuban landscape of the early 1940s.

What listeners say about The Crook Factory

This is just brilliant. So well researched, Hope they make it into a movie, well narrated.

Simmons' recent books have fallen into a pattern where he researches the historical story and then novelizes them. In general, this is a fine, readable book. Interesting enough to keep reading, but not good enough to call out especially as interesting. There were a few things that did annoy me. - The narrator is somewhat boring and formulaic - Some of the portrayals of the actual, historical individuals are questionable and he took some serious liberties with some historical facts. For example, he refers to Julia Child as a chef working for the OSS as a spy. She wasn't a spy, she was a clerk. And, she wasn't a chef until much later in life. Likewise, his portrayal of other figures have similar minor and major errors. - In general, there really isn't much of a story here. The final conclusion is unsatisfying and the mystery wasn't all that mysterious. This reads more like an homage to Hemingway, and not much else.

A great story that has unbelievable facts

As a fan of Dan Simmons fiction, I am already predisposed to liking his works. This novel is no different. It is an excellent yarn, full of unbelievable yet true events during the World War II. My only complaint with the narrator, who is generally excellent, is his pronunciation of Spanish words. Otherwise he was very good.

Decent reader, does well with tone, expression, and pacing. However, there are numerous situations in the book where the narrator needs to voice either good Spanish or bad Spanish, and he only has bad Spanish. And I found his voices for the two Hemmingway boys to be irritating, and got in the way of the story.

So this is a good read, but the choice of narrator makes it a less-good listen.

Toll the bell on thee Danny boy for splashing around in Hemmingway's wake on this one, finally drowning reader Audio and all. Better epilogue? Have the narrator blow his brains out too.

A good read that went by too fast.

Simmons weaves a good tale. My first from him, but not my last. This piece is historical fiction and the facts are often more fantastic than the fantasy.

This strays from my normal choice of books and i knew Hemingway only as a mysterious author who wrote some stuff people seemed to like, enjoyed drinking, hunting and fishing then killed himself.
Dan Simmons is quickly becoming one of my favorite authors. Every book i have read is, in my opinion, well written and well researched. Again he masterfully weaves fact and fiction.
I did not have high hopes for this for this and only picked it up as my list of books waned. But i was drawn into the story of nazi spies, undercover agents, shootouts, political intrigue and adventure.
The story was well performed by a narrator who i didn't recognize but i thought did a great job.
This book will be a great choice for people interested in the time period, spies, Hemingway, a good book or, like me, a big fan of Dan Simmons.
I really don't have anything negative to say about this book or presentation. The only reason for not giving a higher score was that i enjoyed the subject matter of Simmons' other books better.
Lastly i want to say again Dan Simmons is awesome. I first read Song of Kali, which was dark and great, then moved on to others. Drood, The Terror, The Abominable, The Fifth Heart and now The Crook Factory have all been fantastic. Consistently good enough that i felt compelled to write this, my first review.

Dan Simmons does it again!!

What did you love best about The Crook Factory?

well written and researched, great story, from the first chapter till the last.

Yes, knowing nothing of Ernest Hemmingway's life, it was an educational and interesting story. while some was obvious speculation on Simmon's part. You the listener could believe such a great story was possible.Loved the book, was not disappointed, listened to it twice...

well worth a credit

This reader is biased.

Reasonably well done - It is hard for this reader to like Hemingway in any part of his life. I kept having the feeling that this story would have been much more interesting if the author had been forthcoming about his day-to-day character - he was a great seeker of fame.

Probably more like 3-1/2 stars, maybe even 4. That's the issue with this book. At times it was very interesting, other times it was confusing. I was not sure why some things happened and when I went back to see if I missed something, I hadn???t, or I missed it again? At the beginning I found myself going back so much I put it on hold and got another book so I could listen to it will I worked on a home project. I waited until I could focus more to finish this one. I wasn???t sure how much of this was fiction or reality either. In the end the author explains some of that in the epilogue, but I might have enjoyed the book more if the prologue revealed a bit more. Others might not see this as an issue and I think many people will really like this book. It just missed the mark for me a bit. That said I did like many of the characters in the book, for sure the main character Joe Lucas, and the portrayal or Ernest Hemingway. The voice for Hemingway was a bit whinny and irritating at times, which does not fit the profile, but that was a minor issue. If you like stories that delve into some of the unknown aspects of WWII and are curious about Hemingway himself, you???ll probably enjoy this book. Even at 3-1/2 stars it was not a wasted credit. Just not a big winner for me.