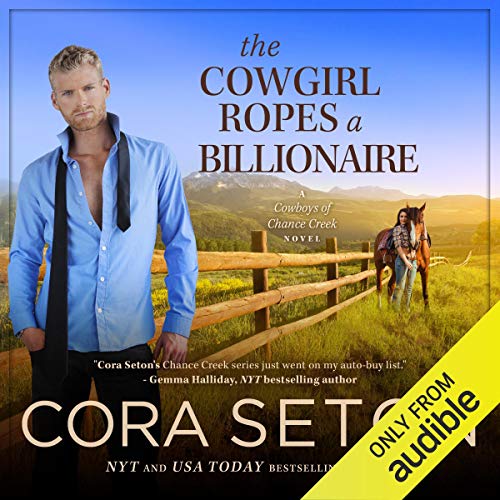 The Cowgirl Ropes a Billionaire

By: Cora Seton
Narrated by: Amy Rubinate
Try for £0.00

Bella Chatham will lose everything - her veterinary practice, her animal shelter, and even her home - if she can't find another source of income, fast. So when her best friend signs her up for the hot new reality television show, Can You Beat a Billionaire, Bella accepts the challenge and hopes against hope she can win the $10 million prize. If she doesn't, it's bye-bye pet clinic and shelter, bye-bye Chance Creek, Montana, and hello to marriage to the billionaire for a year! Evan Mortimer, billionaire, can't believe he's reduced to competing in a television contest to win a wife. Unfortunately, it's the only foolproof way to secure his position as head of Mortimer Innovations. At least he'll be able to dump his "spouse" at the end of the year; he's much too busy to be tied down to a country bumpkin cowgirl. Bella doesn't expect her adversary to be handsome - or funny, or compassionate - but Evan's all three, and he's proving a tough competitor, too. When they end up sharing a tent - and a sleeping-bag - her body betrays her with a longing so deep it cuts her to the core. Still, this cowgirl must stay strong. If Evan uncovers her secret fears, he'll use them to win the contest - and then he'll own her for a year. She'll be out of luck, out of cash, and stuck being Mrs. Mortimer until he kicks her to the curb. Too bad she can't decide which is worse - winning the show and losing Evan forever, or losing the show and only being his temporary wife. Evan can't believe he's falling for the one woman who doesn't want him. This cowgirl's not impressed by his money, his name, or his inability to sleep in a tent with her for an entire night, but every look and touch she gives him sends his desire through the roof. With a director determined to use his claustrophobia to make him look like a fool, and an adversary so sexy he can hardly see straight, he'll need all his savvy to come out on top.

What listeners say about The Cowgirl Ropes a Billionaire

I had high hopes for this book given I share the heroine's love of animals and the premise of the story was interesting. I don't like spoilers, but I will say that I found myself saying out loud, "Why is Bella so flaky and dumb?" There were just too many flip flops in her personality... It didn't come across as realistic. And supporting character, Madeline was downright rude, snarky and totally unrealistic. As a director, she would never keep her job being that rude and unreasonable. It takes a lot for me to write a negative review about a book, but this one had enough holes to make me do it. Also, the audio performance was not good. The narrator's cadence and penchant for dragging out syllables had the effect of nails on a chalkboard.

A billionaire needs a temporary wife to keep his family business he's running. A vet needs money to keep and add to her no-kill rescue part of her business. A reality show pits moneymen against middle-income people to see who beats who. Not the way either one of them wants to meet their needs but it will work--at least for whoever wins.

The attraction between them battles their need to win, knowing the importance of each. Add a downright nasty director of the reality show to their competitiveness and you have a great plot. I enjoyed the characters and the self-awareness awakened on the show. While the narration was good the English accent could use some work.

I have several other audios in the series and plan to listen next. An enjoyable romance.

Yes, I totally enjoyed this Audible. If you ever watched a reality show and enjoyed it, you should enjoy this. Our couple met and compete on the reality show 'Can you Beat a Billionaire'. Bella is a vet for small animals as well as having a shelter for unwanted cats and dogs. She is about to go under trying to provide all the food and expenses for the shelter from her regular business. Our billionaire must marry so that he can keep his company. They must endure contests. Sleep in the wilds at night. The characters are delightful. The narration is great. Now I can't wait to listen to the next story in the series.

Can a cowgirl and billionaire work together?

Another great Chance Creek story by Cora Seton. I read the book several years ago, but wanted to try the audible version. I always get a second view of the story when listening to someone read it. Bella is a vet from Chance Creek who needs money fast to save her vet clinic and shelter. Evan must get married within 30 days or lose control of his corporation. Both sign up for a reality show pitting the contestants against each other with various challenges. Both want to win, but start seeing their opponent in a different light as the days go by. Who will win? Bella or Evan? Will they play fair, or try to sabotage the other just to win the game.

Interesting. I have never read a story quite like this one. Almost the entire story surrounds a TV game show simular to survivor. As the competition moves forward Evan and Bella get to know each other.

Are all reality shows rigged from the start?

After being trapped into competing against a billionaire on a reality show to save her veterinary practice, Bella has to face her fears as well as the competition.

I loved everything about this book. The narrator and the story. Cora just keeps coming up with original plots that I can’t get enough of.

The best yet in the Cowboys of Chance Creek series by Cora Seton. This was lots of action and a steamy, easy to read romance. It can be read as a standalone book. The audible version is well done.

The Cowgirl Ropes a Billionaire

Would you consider the audio edition of The Cowgirl Ropes a Billionaire to be better than the print version?

Hearing it read out loud makes it more like watching a movie in your head.

What other book might you compare The Cowgirl Ropes a Billionaire to and why?

This one is very similar to all the other books in this series.

It was good. She was able to perform each character very well by having a different voice for each one and was very consistent with this.

When Evan and Bella finally realize their feelings was a great scene. It was like "finally"! However, when Evan went to Bella's shelter was a great moment. Don't want to spoil it for those who haven't read the book.

I've enjoyed this series and getting to know the many characters. I've got the next one ready to listen to.


The publishers summary is a pretty detailed synopsis (and contains some spoilers, in my opinion) so I will not tell you anymore about the plot, just my thoughts.

This is a unique twist on the "billionaire" theme that is so prevalent these days. It is a bit predictable but I found it a lot of fun too. Does that make sense? It's the billionaire theme with reality TV and a few other elements.

If you are one who likes a lot of descriptive "intimacy" you may not care for this one. I think it fits perfectly in the genre of Chik-Lit. A pretty woman with a lot to push and pull.

My only complaint (and a lot of authors do it) is the repetition of why the character is doing what he or she is doing. I don't need to be told every few paragraphs or even every chapter why Bella's doing this show. The same thing goes with the male character, Evan. I beg authors and/or editors, your readers are pretty smart and we don't need to be reminded every five or so minutes as to the why.

The narration was very good. I did speed the book up a little bit because that is my preference. The narration/performance was well done and each character was defined with his or her own unique voice.

*I did receive the book in exchange for my review.


~~I read the reviews of others before I purchase a book. If you found my review helpful in your decision about this book, would you please select yes directly below this paragraph? Thank you so much. Please consider "following me" here on Audible.com.