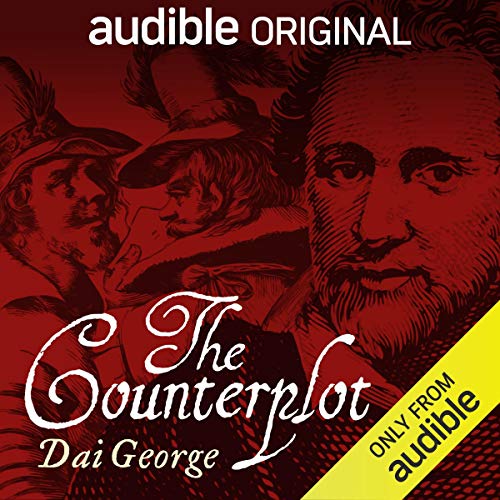 It’s 1605 in London, and Ben Jonson, a contemporary of Shakespeare, is finding life a struggle. With his career waning and his patron, Lord D’Aubigny, growing tired of him, he throws caution to the wind and writes a satirical play, Eastward Ho! But its laughs at the expense of the monarch cost Jonson dearly, and he lands in jail with his reputation in tatters.

On his release, he searches for his estranged wife, Anne, and discovers that his own long absences and the deaths of their three children from the plague have led her to take comfort with a furtive crew of ardent papists.

Out of concern for his wife, Ben becomes entangled with this seditious group and learns of a violent plot its members are hatching. When this plot - the infamous Gunpowder Plot - is exposed, Ben and his wife find their own lives in danger.

Set in the London of Shakespeare’s heyday, The Counterplot is a mix of historical novel and gripping adventure.

What listeners say about The Counterplot

A riveting must-read for Jonson/Shakespeare fans

The Counterplot is a gripping story of courtly intrigue, religious tension and what it takes to make it as a struggling artist in Stuart England. With a well-realised chorus of characters, it sucks you into Shakespeare’s London through the eyes of the playwright Ben Jonson as he battles fortune’s wheel to come out on top. The gunpowder plot acts as a centrepiece, chucking in a good measure of tension and excitement. The author paints the period vividly and oozes with historical knowledge. But the characters feel enduring and the content applicable to the modern world. This is a must for those who love the Tudor and Stuart period and all of its exceptional literature.

Dai George has an equally brilliant ability to describe the minutia of the human heart and the sometimes horrifying social context of the time. Fantastic research is brought to life with wit and compassion. Every character is finely drawn but my personal favourite is probably William Shakespeare, who seems more real in this book than any other portrayal of him I have known. The poet and playwright Ben Jonson is ensnared by religious conflict and the lure of theatrical glamor. What comes out of this representation is sometimes a meditation on being a writer encountering censorship and glorious success. The staging of the courtly masque with Inigo Jones is completely brilliant. The descriptions of grieving for dead children are utterly heartbreaking. I loved listening to this novel as much as reading Mantel, Tremain and Penelope Fitzgerald at their best,

Wonderful being transported to Stuart England

In these days of lockdown, The Counterplot offered a wonderful escape to a different era. George brings Stuart London to life with the sounds, smells and language of the time. Ben is such a complex character and I hope we get to hear more about how his life develops after this instalment. Would thoroughly recommend.

This is a terrific read, bringing alive the Stuart era in London with a story about Ben Johnson and his life as a playwright. The detailed picture of the period and the vivid portraits of the characters brought the story to life. It was read well and I enjoyed it very much.

Dazzling storytelling. I had no knowledge of Ben Johnson's murky Jacobean life so it was all new and fascinating to me. Dai George skillfully weaves the big historical canvas around the personal narrative, with such a light heart, eye and nose for detail, and a firm grasp of the religious vendettas of the time. Characters come to life in your ears. I adored Ben's sweary indignant loving mother, and shuddered at the sly poisonous Lord Salisbury. It takes a little while to get into its stride, but is well worth the time spent. What a debut! I can't wait for George's second novel.

A great story full of intrigue and historical fact

Fantastic book, beautifully written and meticulously researched, love them or loath them, the characters come alive in this amazing first book from a young author. I look forward to future works from Mr George.

Enjoyable retelling of the mid-career life of Ben Jonson

We read a bit of Jonson at school and I never thought I’d want to read a novel about him but it’s been enjoyable to read a book that acknowledges that there were other writers than Shakespeare and that history didn’t end on the death of Elizabeth I.