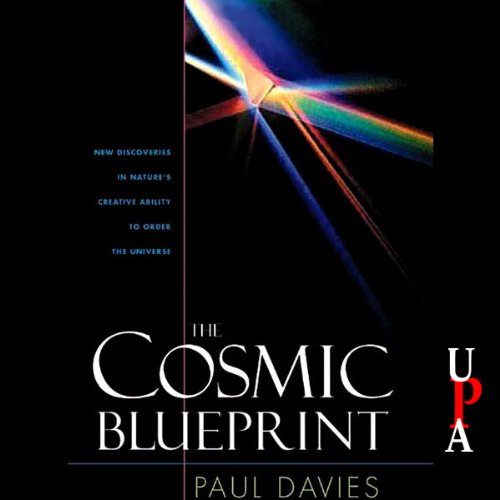 In the preface to the 2004 edition, Paul Davies writes, "If the laws of the universe really are a sort of cosmic blueprint, as I suggest, they may also be a blueprint for survival." This critically acclaimed book explains how recent scientific advances are transforming our understanding of the emergence of complexity and organization in the universe. Melding a variety of ideas and disiplines from biology, fundamental physics, computer science, mathematics, genetics, and neurology, Davies presents his provocative theory on the source of the universe's creative potency.

He explores the new paradigm (replacing the centuries-old Newtonian view of the universe) that recognizes the collective and holistic properties of physical systems and the power of self-organization. He casts the laws in physics in the role of a "blueprint", embodying a grand cosmic scheme that progressively unfolds as the universe develops.

Challenging the viewpoint that the physical universe is a meaningless collection of particles, he finds overwhelming evidence for an underlying purpose: "Science may explain all the processes whereby the universe evolves its own destiny, but that still leaves room for there to be a meaning behind existence."

"Science expositor and physics professor Davies has written a fascinating book in which he examines the centuries-old conflict between holism and reductionism: What is the source of the universe's creative potency? He argues that the basic stuff of the universe matter and energy is not simply inert, but has the ability to self-organize. Drawing on recent discoveries from biology, fundamental physics, cosmology, and brain research, Davies argues that the universe is developing an essential, unfolding pattern and order. While highly debatable, this is a provocative book that should be widely read." ( Library Journal)
"Unquestionably, Paul Davies has established himself as one of the most felicitous writers on physics at the frontier." ( Nature

What listeners say about The Cosmic Blueprint

There is good and there is bad

The Good,
1) Davies explains physics and philosophy better than any one,
2) The chapter on entropy is one of the best I've ever heard,
3) The philosophy of the approaches to science from atomism, reductionism and the teleologic of Aristotle is explained in accessible ways for the non-philosopher and are put in proper context,
4) Determinism and randomness of physics are completely explored and expertly explained,
5) Gives good explanation on chaos theory,
6) You will have learned something you didn't know by listening.

The Bad,
1) The book is dated. Originally published 1988. No Dark Energy. Inflation Theory becomes more developed after book is published,
2) His holistic approach is not believable to me,
3) He does not take evolution as a fact. Books by Dawkins, Robert Wright, and E.O. Wilson have drilled in to me that evolution is a fact,
4) When he speculates on what will possibly come to pass, it hasn't,
5) The process of formation of galaxies is much better understood today than when the book was originally published,
6) Hard to follow some of the math and charts while listening,
7) Very hard to follow his Cellular Automation explanation just by listening. Look up rule110 on wiki before listening and that will make it easier to follow.

Overall,
Book is dated. He explains science and philosophy better than anyone. He has strong opinions for his pet theories, but he is incredibly fair and presents all sides. I love reading Paul Davies and I wish Audible had more of his books.

Too deep for me

Even though I had advanced math and physics in college, it's been 25 years since I've used them. This book is not ideal as an audiobook and for those without a firm understanding of math and science. I could never quite engage with this book and eventually gave up