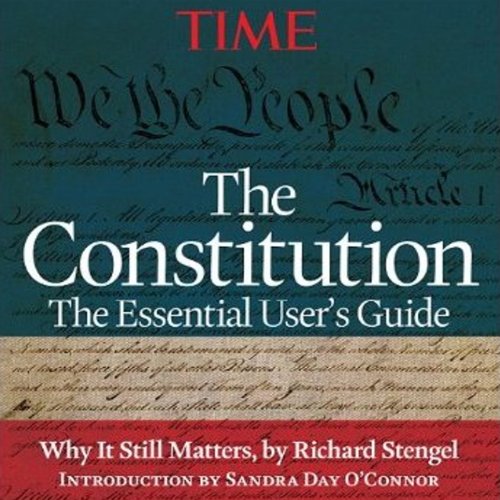 The Constitution: The Essential User's Guide

By: Editors of Time magazine
Narrated by: Dennis Holland
Try for £0.00

Americans have debated the Constitution since the day it was signed, but rarely in its 223-year history have so many disagreed so fiercely about so much. Everywhere there seems to be debate about the Constitution's meaning and message. The Tea Party, with its almost fanatical focus on the founding document, contends that its primary purpose is to restrain the federal government - but does it really say that? Among scholars, some believe the Constitution should be interpreted exactly as the framers wrote it, while others analyze the text just as closely to find the elasticity they believe the framers had in mind. But how could the founding fathers know about the world today, with DNA, sexting, airplanes, TV, Medicare, computers and Lady Gaga? In this probing and accessible book, Time's editors bring the founding document to life, showing how it was written in a spirit of change and revolution and turbulence. With an introduction by one of America's top jurists, an essay by Time managing editor Richard Stengel (former president of the National Constitution Center), and the full text of the 8,000-word Constitution, annotated to show its most controversial passages and little-known quirks, Time's concise audio volume is an indispensable guide for the well-informed citizen.

What listeners say about The Constitution: The Essential User's Guide

A very poor attempt at furthering a twisted bias

A truthful rendering of the purpose and beauty of the system of government established by the constitution. The constitution forms an equilibrium system joining the States in a "More Perfect Union" to govern together as Equals. This point is totally overlooked by this publication which chooses to promote stereotypical half truths.

What was most disappointing about Editors of Time magazine’s story?

The promotion of the lie that the drafters of the constitution put in the constitution that Black Saves were considered 3/5 a human being. The truth is that the drafters knew very well that Blacks were human, the 3/5 was to count them since they too were property, and as such would disproportionately count their owners and thereby over represent their States. To offset this Direct taxes were apportioned to each state according to the Same enumeration that apportioned representation to each State. A review of Federalist Papers #54 by Madison makes this point clearly.

the Narrator did not detract from the book.

What character would you cut from The Constitution: The Essential User's Guide?

this is not applicable.

This book is promoted as civics education which should be taught to all our children, but this does not fit the category of essential constitutional understanding which should be passed on in any fashion.

The most important, and misunderstood, concept in the Constitution is the Representation of the States through Article 1 Section 2 of the constitution, and the assembly of the Bicameral Legislature by State, not by Party affiliation. The Assembly of the Bicameral Legislature is the embodiment of the "More Perfect Union" of the States. This is what must be taught through civics education.