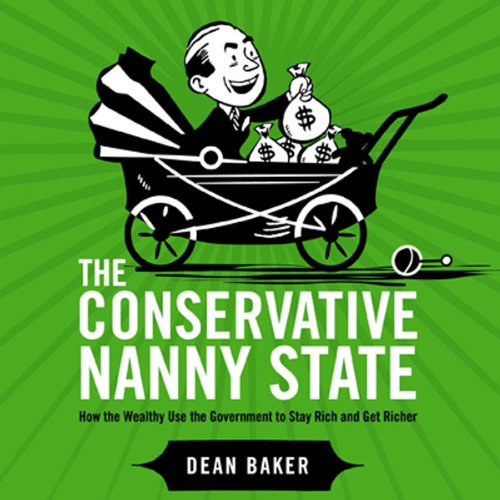 By: Dean Baker
Narrated by: Sandra Swafford
Try for £0.00

In his new book, economist Dean Baker debunks the myth that conservatives favor the market over government intervention. In fact, conservatives rely on a range of "nanny state" policies that ensure the rich get richer while leaving most Americans worse off. It's time for the rules to change. Sound economic policy should harness the market in ways that produce desirable social outcomes: decent wages, good jobs, and affordable health care.
©2006 Dean Baker (P)2006 Polity Audio LLC and Creative Commons
Show More Show Less

What listeners say about The Conservative Nanny State

This is probably worth a listen if you want to expand your horizons and have a lot of time on your hands.

I would not say that I have a particularly strong leaning either left or right, but I felt that this was paper-thin. I have not journeyed (too) far into this audiobook as I found it tiresome from early on. It makes confident statements about the negative aspects of capitalism without really explaining the rationale behind its apparent evilness. We then find ourselves given a short, positive alternative without explanation.

It doesn't feel as though the writer has gone to lengths to justify his perspective of the world, nor to deride the alternative.

Imagine the general musings from a trade union agitator-slash-conspiracy theorist that people politely ignore in the local pub.

Tax breaks to businesses or the poor? Which way?

Things that did soak through my addled brain were:
1. We need to stand up to the Conservatives and re frame the discussion on their "less government" stance.
2. One of the reasons our healthcare system is in trouble is the salaries paid to doctors are higher than any where else in the world and the fact the government frowns on too many doctors from other countries practicing here. Same for lawyers and CEO's salaries are out the roof.
3. Mr. Baker wants to do away with patents and install a system of vouchers so entrepreneurs can be paid for their work. (Didn't understand where the money would come from, but understand the idea that people like Bill Gates made an exorbitant profit from his patents.)

The best part of this book is the new ideas that are coming to change the way we do business. I am not sure if they will all work but I welcome the innovation.

I enjoyed the narration and liked the way the footnotes were handled.

A clear and direct book that points out flaws in conservative policy and suggests possible alternatives. This book addresses issues such as protectionism for certain professions, unnecessarily high CEO pay, medical insurance, language tricks used by conservatives to promote their agenda (e.g. "free trade" agreements such as NAFTA and CAFTA are not designed to promote free trade), and many others. Assertions made in the book as supported by a large number of studies noted in the reference section. The book (including figures and references) is also available for (free) on-line reading at the book's website: http://www.conservativenannystate.com/

This is a "must read" book for anyone who wants to understand the deeply rooted reason for many of the current political and economic problems.

The reviewers who disagree with Baker...

... are unable to tell us why. If the book is "so full of holes", you would expect them to at least point one out.

Dean Baker has been consistently right about matters economic, and this book tells you why.

The computerized voice is only a small part of it. The fanciful claims with no facts to back any of it up makes this book a laugh. The laughing only lasts for so long. Eventually the comedic relief of ridiculousness because as wearisome as repetitive, juvenile humor does and a person starts feeling just a little dumber for each second of continued listening.

This book is a serious economic policy assessment of what conservatives actually do in exact contradiction to what they say. The narrative is coherent, consistent and very clear. The book is an excellent defense against the most outrageous lies that conservatives keep telling the American people. The solutions the book proposes are very positive and necessary if we are to restore equality or genuine democracy.

This book is trying to intentionally push ideas of what is possible. The point is not the political viabilies of different economic ideas, but reality that different ideas exist. Yes there would be some unintended consequences, but there are unintended consequences now. The author is intentionally trying to push conservatives buttons and there is fair amount of snark and humor (most of which is lost in the reading.)

...on protectionism and welfare for the rich. Important and deeply connected to a wealth of publicly available evidence. May take a second listen to fully reveal the gems locked within. The journey, however, is well worth the effort.

I started the book expecting to share in a lot of the perspectives. I’m a libertarian, so I know full well the ways in which conservatives restrict the free market and help the rich.

However, I found the majority of Baker’s points to be rather irrelevant. He doesn’t seem to have a solid understanding of the free market (and therefore calls things “interventions” which aren’t) and many of his points are shaky at best and it seems like he’s just stretching out for any political-hackery argument he can.

Like I said, I’m well aware that conservatives do, indeed, benefit the wealthy in many ways (most of the time it’s bipartisan overlap, though, which Baker himself would also be in support of, such as expansionary monetary policy, tough regulation keeping out competition, etc). However, I found Baker’s arguments to be terribly misguided and annoying.

I love to read but am rarely moved to review a book. It really has to have 5 stars on Amazon and make me feel something.
This book really made me happy (and sad). The story is pretty implausible and yet so real. The characters are quirky and perfect, some of the truths of the book made me want to cry

The perverse thinking is hard to imagine anyone subscribing to.
I do not recommend letting letting children or college students read it.
Best suited for the well educated, who can pick out the tripe in every sentence.