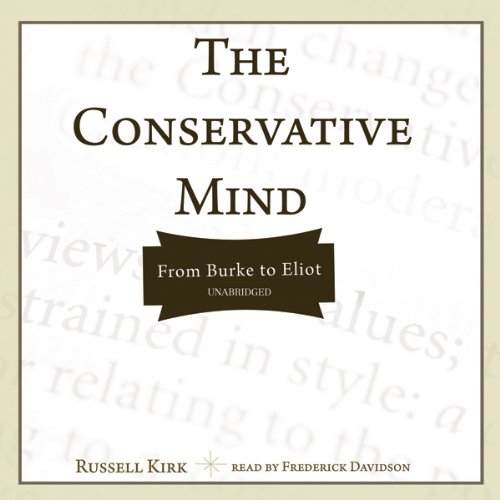 By: Russell Kirk
Narrated by: Phillip Davidson
Try for £0.00

First published in 1953, this magnificent work will be remembered in ages to come as one of our century's most important legacies.

Written during a time when liberalism was heralded as the only political and intellectual tradition in America, there is no doubt that this book is largely responsible for the rise of conservatism as a viable and credible creed.

"Kirk is assured a place of prominence in the intellectual histories for helping to define the ethical basis of conservatism. He has tried to pull conservatism away from the utilitarian premises of liberalism, toward which conservatism often veers, toward a philosophy rooted in ethics and culture." ( Wall Street Journal)

What listeners say about The Conservative Mind

I have only "read" about a third of the book, but felt I needed to add to the comments available. The book addresses the contributions of significant individuals to conservative thought. It attempts to put their thoughts in the context of the times and lives of those people. I would not consider the book a collection of biographies. I believe that one of the purposes of the book is to create an interest in the reader that will lead him to go to the writings of the people mentioned. In my case it succeeded. A couple of other comments: Mr. Kirk tends not to define the terms that he uses, so the reader is left to find the definitions himself, or find the definition well after the term is first used. I also sometimes found the book a little hard to follow as I was listening, and had to refer to a text copy. I would definitely recommend the book, especially to those looking for the basis of conservative thought.

Worth the time and effort

This book should be read/listened to - not for correctness - and not for conclusions - but because it broadens the background of almost every reader by presenting competing viewpoints to those propagated by academia and the popular media.

I also like when Kirk points out repeatedly a fact that most people seem to hide themselves from today: that most people don't know or understand anything about government and therefore universal suffrage democracy backfires.

Kirk loses me with his insistence that protection of property rights cannot come about from people following the path of enlightened self-interest. Instead, Kirk insists that religious morality is the only way to convince people to protect property rights.

But, besides that one issue, the book is excellent and well worth reading.

The book is excellent, stimulating and informative -- even for a thoughtful liberal. Phillip Davidson, however, is not a good reader because there is too much dynamic variation in his speaking voice -- i.e., he will utter one syllable of a word clearly and distinctly, then drop his voice for the rest of the word or sometimes even the phrase, making it very difficult to catch what he is saying. A good reader needs more consistent volume and phrasing than Davidson has. Unfortunately, his reading voice is an impediment to the enjoyment of an otherwise excellent experience.

A remarkable must-read with some glaring flaws

Things started off pretty well. Near the end, this book started to get really repetitive--the only thing that alerts you to the fact that you're not listening to an earlier part of the book is a change in names.

The Conservative Mind eloquently traces the history and rout of philosophical conservatism. One can't help but wish that we had more of this and far less of the awful populist nationalism we see today. But some of Kirk's ideas are probably best left behind.

He seems to develop an odd insistence on dualism later--this doesn't make sense in orthodox Christian belief or in science. That's a minor issue. Kirk also hates cars because they enable people to move more than before. My biggest gripe, which nearly got me to stop listening altogether, was Kirk's admiration for the old ways of the old South. This he does without mentioning slavery at all. I don't care how conservative you are, there's no legitimate worldview that seeks the preservation of slavery. I say this as a conservative--and to put it in Burkean terms, Providence broke that southern yoke of oppression.

Kirk's conservatism is eloquent and powerful, but seems unnecessarily cruel and arrogant. The prose in this book is also awful. Obscure references and an apparently strong preference for words with Latin roots makes it a somewhat grating thing to listen to.

All that said, I'm better off having read this book. Its cultural importance should not be ignored, and I think a renewal of conservative values based on the permanent things would do the world much good.

An inspiring work illustrating great comprehension. Narrator spoke a little too slow. Worth the Listen.

Very good, although it was too deep to follow in-depth while working

I listen to a lot of books while I work my construction job and I thought this was excellent. It was difficult to follow while working do to the depth of material but definitely worth the read. I plan to get a hard copy to revisit and make notes.

necessary reading for all political sides

well articulated on the full range of political thinkers, including poets. Kirk helps elevate political discussion on all sides of the recurring issues of how to get along with one another and make life more worth living.

Amazing. A must have!

Great review, history & summary of Conservative thought & philosophy throughout the ages. Kirk does a wonderful job. A must have for anyone interested in politics.

Kirk's voyage through history essentially makes a case for conservatism that is neither associated with rightist collectivism nor libertarian or classically liberal philosophy. While his work is dated by his minimal discussion of any voices of women from the eras he considers, and he never really fully comes to terms with conservatism's reluctance to tackle ills such as slavery, he articulates the place for a thoughtful, tolerant, institution and tradition upholding conservatism that has almost disappeared from 21st century American discourse. The kind of conservatism he argues for would do well as something to recreate both amongst Republicans and Democrats. As others have commented, the narrator, Mr. Davidson, has a delightful, thoughtful style, but his cadence is uneven and there is inadequate compression and pop filtering in the audio recording, and the result makes parts of this difficult to hear especially for those of us who listen to audio books during commutes, but the book is really more worth it for a feel for a notion of conservatism being advanced here rather than as a means to learn all the specifics of this history.