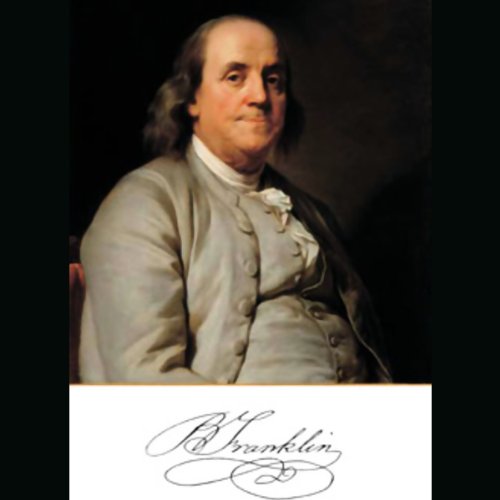 The Compleated Autobiography by Benjamin Franklin

By: Mark Skousen
Narrated by: Richard Ferrone
Try for £0.00

Benjamin Franklin's autobiography is one of the greatest autobiographies of all time, but it was incomplete. Franklin ended his life's story in 1757, when he was 51. He lived another 33 eventful years, serving as America's advocate in London, Pennsylvania's representative in the Continental Congress, and America's wartime ambassador to France. Now, at last, we get the rest of the story, in Franklin's own words.

One of the most fascinating of our Founding Fathers, Franklin was a polymath, a practical statesman, and an incomparable cynic and wit. The Compleated Autobiography by Benjamin Franklin, faithfully compiled and edited from Franklin's papers, reveals why he became a spokesman for American independence; his views on the Constitution; what he really thought of his fellow patriots, like Adams and Jefferson; his candid views on French women, the Penn family, and his own faith; and much more.

" The Compleated Autobiography retains [the] sophistication, humor, and sense of irony that made the original autobiography a classic, and is destined to create a renewed appreciation of Benjamin Franklin." (National Review)

What listeners say about The Compleated Autobiography by Benjamin Franklin

I was expecting more of a history lesson about ole B. Franklin, but this book delves into his thinking and insights and reveals a facinating revolutionary hero who had common sense and vision to see things how they should be. We could only wish someone like him would bring common sense to dealing with public problems. This books reveals his character and gives you a prespective of live in the 1700s. Great for critical thinking students!

This goes on the must-read list - books that change the way I think about the world. Franklin's writing is delicious - witty, self-deprecating, charming, satisfying. His stories are sometimes intimate, sometimes jaw-dropping. His insights are prescient - more than 200 years ago, he looked forward and saw much of what we have since become - both good and bad - as a consequence of the way the constitution was framed. Before I read this book, I went back and read the autobiography he published when he was 51 - a rollicking good read. This one, though, covers the next 33 years - the really juicy bits. One gets to know him better here.

The reader did a fine job - excellent, interesting, clear presentation of the text. The pacing of the reader was a bit slow for my taste, so I ramped up the audible player to 1.5x, and it was perfect for me.

While it is the complete works of Ben Franklin after his autobiography. I mis-read Compleated Autobiography. I thought it was also going to inclue the original and carry on from there. There are some good parts, but still tough to get through in places. But very interesting to learn more about. We were so fortunate to have him during that time.

The author appears to accomplish his purpose. That is, he tries to let Franklin's biography be told by Benjamin himself. This is an excellent insight into the life of Benjamin Franklin after 1757. Richard Ferrone does a great job of reading. Overall, this is every bit as good as B. Franklin's autobiography. I am not a scholar in this field, but I have the feeling that I was hearing history from Franklin's point-of-view without it going through the strainers of historical bias and interpretation. Download it. You'll probably love it.

I have very little knowledge on the American war of Independence, and most of this book is based on this history.

There was one aspect in this book, where I suddenly noticed a pattern. Before I expound, I sincerely hope that this aspect pattern, that I noticed, doesn’t reflect any anger or bitterness towards this nation.

I noticed that when the British made war on a nation, and when that war came to it conclusion, the British seem to give the impression that they were/are the injured party and also seem to get the better part of any deal that is made.

The author put this book together very well and I enjoyed it very much!

My thanks to the narrator for doing an excellent job.

interesting, starts late in his life

Reads like a diary. Starts in his time as minister to France up to his death. Feels like this is volume 2 and there should be a volume 1 out there.
Typical Franklin, funny, to the point, a bit naughty.
A very good book if you want to see how Franklin worked as a politician.

fantastic peak into BFs years as a diplomat

Narration was great! The stories were compeling. the use of personal correspondence is brilliant and definitely helps you step into BFs way of considering his actions and the actions of others.

I have always had great respect for Benjamin Franklin but after this audio book biography my love & respect for the man & his intellect, vision & kindheartedness has grown a thousand fold! I love the man & have now added visiting his gravesite to pay my respects to my bucket list. Mark Skousen’s narration transports you into the 18th century & you can almost imagine being there. Truly fascinating!

This book was well organized and had a lot of interesting information in it. My favorite Benjamin Franklin quotes are:

1. Immigration - does not diminish but multiplies a nation.

2. God has been very good to us in many respects. Therefore let us enjoy his favors with a thankful and cheerful heart.

3. Exercise before you eat.

This is the only audiobook I have failed to finish. The narration was tedious and the re-cobbling of Franklin's works was disjointed.