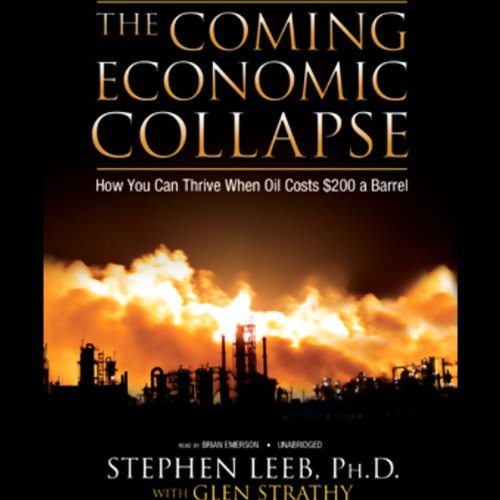 How You Can Thrive When Oil Costs $200 a Barrel
By: Dr. Stephen Leeb, Glen Strathy
Narrated by: Brian Emerson
Length: 7 hrs and 18 mins
Categories: Non-fiction, Economics
3 out of 5 stars 2.9 (9 ratings)

When Dr. Stephen Leeb speaks, smart investors take heed. In his previous books, Dr. Leeb predicted the great bull market of the 1990s and the collapse of technology shares in the new millennium. Now, in The Coming Economic Collapse, Dr. Leeb shows that the U.S. economy is standing on the brink of the biggest crisis in history.

As the fast-growing economies of China and India push global demand for oil beyond production capacity, Americans will experience a permanent energy shortfall far worse than the one in the 1970s. The result will be severe financial hardship for most people, and once-in-a-lifetime opportunities for investors to become incredibly rich.

This is an urgent call-to-arms to avert an all-but-certain catastrophe and a survival kit for an era that offers us only two financial choices: poverty or wealth.

Most of my listens on Audbile are fantastic. This was very disappointing.
His analysis of the impact is weak. He repeats the same point over and over again, and repeatedly harks back to his earlier writing.
I seriously question his investment advice. At the time of writing he recognised that US house prices might be a bubble, but was confident that housing and real-estate would be a sound investment, and there would be no collapse. He is so off the mark on this, it is ludicrous, and really puts serious doubt in my mind about his other over his other 'sound' advice.
The short chapter at the back on which investment sectors might do well, and which might do poorly, is admittedly quite interesting, and perhaps worth the price.
Also, the narrator, in my opinion, has a horrible grating tone, and often sounds very smug.
READ anything by Richard Heinberg for an absorbing and far-sighted analysis of the oil crisis.

A thoughtful approach to the explanation as to why oil will be in short supply and how the world will react to it. According to the author, the coming oil crisis will not be a temporary blip like that of the 1970s...this one will be ongoing and life altering.

I particularly liked, this example highlighting the urgency for finding an new energy source. Think of a granary. Your neighbor owns it. You get all your food from them. You know that the silo is never able to be filled. More is going out than going in. You know they will run out at some point. Wouldn't you look for another source of food? Now imagine the neighbor does not like your family. Wouldn't looking for another source of food be a top priority? This put it in perspective for me.

As for how to make money in this crisis...well that's one man's opinion. I'm not an expert in investments but I'll be monitoring his choices.

helpful for the ordinary investor

The authors articulately give their opinion on coming economic trends that inspired this run of the mill 401 owner to do some of my own thinking. Apolitical and non-judgmental they helped me define my own investment goals and gave me the courage to make some independent decisions as I maintain my preferences in progressive and "green" terms. A must listen for anyone who worries how their retirement accounts are going to mature.

Never have a heard so much self praise and effort dedicated to making one's self look brilliant. While the notion of the book is interesting, the authors style is wretched. Information is repeated ad nauseum and many references ask for giant leeps in logic to follow. The only reason this book gets more than one star from me is because the information is somewhat viable and merits thought. If an executive summary exists, get that and save yourself the painful experience otherwise.

Summary: Fuel prices will go up, and if you don't think so, you have succumbed to "group think." Inflation likely up (he hedges). Invest in 1970s winners: oil, alternative energy, oil services, gold, real estate.

Criticism: Terrible book. Worst of the year, (of about 80+, mostly academic). That fuel prices will go up to $150+ per barrel in ensuing decade is probably true, but in this book you won't find evidence stronger than what you'll get from a hotel bar bull session. Author merely repeats thesis, and disparages those who disagree as succumbing to group think. Scant economic argumentation, and no social psychology evidence presented for relevant “group think” thesis. Transparent and pathetic rhetorical gimmicks, (ad hominem, false modesty, fallacious arguments from authority, unbalanced statistical comparisons, and pretenses of scientific competence, which get rather hilarious when he gets high-school science wrong.) Regrettably, a repulsive personality winds through the patchwork of second rate speeches composing the book. Investment advice only at tail-end, last 10%, of book.
The prose is business incompetent, the evidence infomercial, the personality egotistical, the investment intelligence, conventional and dull unless contradictory and useless. I fear first that reading the book lowers one’s IQ, and most that its strong sales indicate illiteracy on wall street.

Note: Do not confuse this book with *Collapse*, Jared Diamond’s brilliant integrated history of failed societies, (also on Audible). Diamond won a Pulitzer for *Guns, Germs and Steel*, and is one of the world’s most distinguished scientists.

Economics is not a subject that I have a lot of familiarity with, but this book presents the subject in a very easy style. I was fascinated with the history of economic failures, and in light of the current world conditions the predictions made are right on target. I think this book would help anyone to understand at least some of what is going on currently. I am not so sure the investment strategies are as simple, but I really don't know much about that area either.

Well, everything on htat book is happening right now. Inspired me to appropriate action accordingly.

Not really worth the read...

Would you ever listen to anything by Dr. Stephen Leeb and Glen Strathy again?

The last chapter was the only chapter I really found interesting.

Since this book is a few years old, it is interesting to look back and see if what the author was predicting would be correct. Most of the time the author is wrong and completely miss judged the impact that unconventional and shale plays would have on the energy sector.

Could you see The Coming Economic Collapse being made into a movie or a TV series? Who should the stars be?

To say the least this was a very interesting audio but more than that, it should provoke all of us to take action in whatever small way we can as individuals. . The authors presented thoroughly researched material in a way that should make sense to any of use who are not professional economists. The end result was a balanced and compelling account of the impending oil crisis and how it can impact on all of us. As a listener I was left to wonder in amazement how governments can continue to virtually ignore a problem whose consequences are enormous. It suggests solutions that cannot and must not be ignored. Recent happenings on the economic scene only serve to underline the disastrous path our current political leadership is taking. To say the least it held my attention throughout

If you change your portfolio every time you read a new investment book do not listen to this one. If you can understand that this is an extreme presentation and temper your own thoughts it is a worthwhile listen. I think there are some very good points in this book but I doubt a collapse. Many of the stocks recommended have done well since the book was written whether they have more to go now is a question. I do feel that the case for mid to long term escalating oil prices is a very strong one and well made in this book. Might want to add one or two recommended stocks to your portfolio but I would not put everything in gold just yet.

Like all investment books it has some interesting points. Probably more right than wrong but the prudent investor always hedges. Listen, think and wait a week or two before acting.

I'm inclined to agree with Eduard from Brookfield, WI. Overall the book is interesting, but find it difficult to accept the collapse of the world scenario presented. I agree that we do need an agressive alternative energy program....but what is new about that idea? We have all known this for a long time now. When gas hits a certain level then other fuels become enconomical and alternatives will become available. I cannot give this book a yea nor a nay, if this interests you then listen to it. If not, select another title as this book was just a bit too one sided for me.