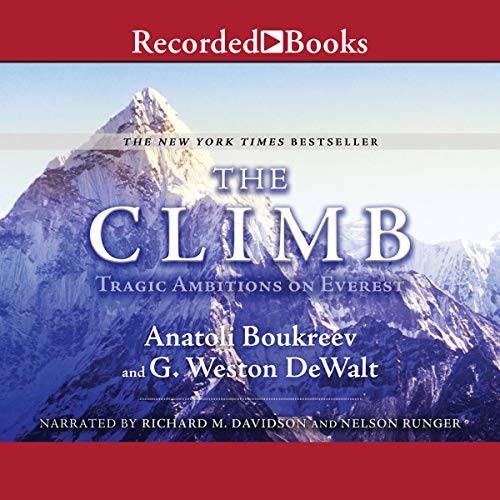 By: Anatoli Boukreev
Narrated by: Richard Davidson
Try for £0.00

Anatoli Boukreev’s first-hand account of the worst human disaster in the history of Mt. Everest will hold listeners spellbound. A top-rated guide and high altitude climber, Boukreev dictated the raw and powerful details of this ill-fated trek from memories and notes recorded just five days after the catastrophe. In May of 1996, 33 people went up the mountain, but only 28 returned. As two commercial expeditions climbed the world’s highest peak, poor planning, miscommunication, and an unpredictable blizzard conspired to defeat them. Although the author made it back to the safety of his tent, he defied his own pain and exhaustion to go back up the mountain. His rescue attempt saved the lives of three climbers. The events of those two fateful days prompted researchers at MIT to develop new technology that could prevent the recurrence of such a disaster. Narrators Richard M. Davidson and Nelson Runger sensitively convey the full scope of a drama and a tragedy the world hopes never to see again.

What listeners say about The Climb

I am an addictive armchair Everest climber! this was a good fix! I am glad he defended himself after being criticised by the novice climber Krakow.

Far more trueful and realistic than the films that have been made of the tragedy on Everest. Highly recommended

No words to add. Loads of mistakes, ego and the modern communication. It's a great book to learn from and with... 🙏

although not as exciting in characterisation of individuals as in to thin air ,I found that this book was based totaly on facts with insights by the author, and not assumptions of what others felt or guesses at reasons for certain actions , if you have read into thin air I recommend you read this to fully give the account balance ,remembering that krakaur was not in this teem and had very few insights into the mountain madness guides or clients

it's okay. not as good as into thin air.

I don't blame Anatoli but it doesn't have the pull of into thin air. the reader was not good though.

definitely worth a read if you have read into thin air. good narrator. the book was well wrapped up and I liked the afterword.

if you're interested in hearing the details of what happened on that terrible day on Mount Everest then this book paints a very good picture. There are details here that only someone who was part of the event could talk to nd the facts are breathtaking

A must read as an additional perspective to the tragedy on Everest as told in "Into Thin Air." I enjoy Krakauer's books, but his engaging style comes at the price of a nuanced perspective on complex events. "The Climb" is clearly a defense of Boukreev. I found his defense to be well worth listening to.

I've slowly learned to distrust krakauer. This book obviously has an agenda, but I appreciate a different viewpoint besides krakauer.

Having read Into Thin Air I was interested in reading more on the subject. I was not very familiar with Mr. Boukreev, but am so pleased to have heard his story of the Everest climb of 1996. It is an amazing one. The book itself is very detailed but this did not disappoint. For me, the more details the better. The 2 voice reading style was a little different but understandable. Worthwhile book if you want more of the story and the true details of this man's unbelievable rescues on the mountain.

A must read if you already read Into Thin Air

Would you consider the audio edition of The Climb to be better than the print version?

What was one of the most memorable moments of The Climb?

The rescue efforts by Anatoli

As dry as a Kumbu cough

Interested to hear the other side of events regarding May 10, 1996 on Mount Everest. Infuriating to hear of Jon Krakeur's willful ignorance of the facts on summit day. However, the rest of this book is not dissimilar to those last few hundred plodding, painful meters to the summit, but lacking any of the glory or beauty, the text is just too wordy and lacks any soul.

What disappointed you about The Climb?

The narration was turgid and ponderous

What was most disappointing about Anatoli Boukreev’s story?

Same with the story. No sense of the remarkable battle he went through with the elements. The entire narritive is bogged down by incidentals and boring detail.

Who would you have cast as narrator instead of Richard Davidson?

Yes. But only because I'm a climber and love the terrain.

I've read a number of mountaineering books and this one is by far the best.

Anatoly Bouchreev is the hero and an amazing storyteller. I think you are you understand more about climbing Everest, Than with any other book.

If you read or listened to "Into Thin Air" you must listen to this. This is another well told side of the 1996 Everest coin. Here the author refutes Krakauer's criticism's of him in not doing enough to save people's lives during the 1996 Everest disaster. And it makes you really wonder why Krakauer didn't do more to investigate his bold claims defaming Anatoli. Written simply and honestly but in a thrilling way - this is an adventure classic for generations to come.

Boukreev is a climber's climber. Not interested in hype or fame, he just does his job. He's the real deal. I loved this book, and I admire the guy deeply.