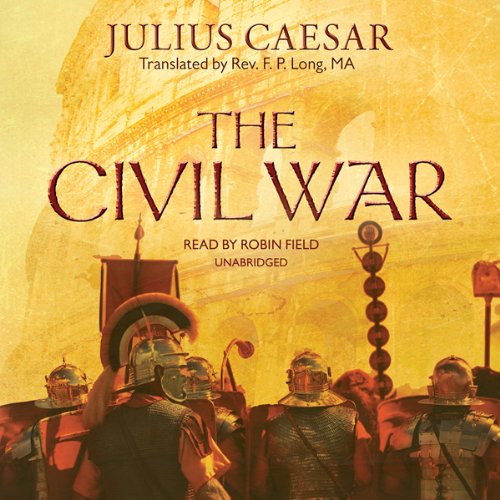 By: Julius Caesar
Narrated by: Robin Field
Try for £0.00

The Civil War is Julius Caesar’s personal account of his war with Pompey the Great - the war that destroyed the five-hundred-year-old Roman Republic. Caesar the victor became Caesar the dictator. In three short books, Caesar describes how, in order to defend his honor and the freedom of both himself and the Roman people, he marched on Rome and defeated the forces of Pompey and the Senate in Italy, Spain, and Greece. Julius Caesar himself was one of the most eminent writers of the age in which he lived. His “Commentaries” offer a unique opportunity to read the victor’s version of events.

Julius Caeser was born on 13 July 100 BC. His family, the Julii, claimed descent from the ancient kings of Rome and from the goddess Venus. Caesar rapidly carved out an impressive political career, forging an alliance with Pompey and Crassus in 60 BC. The Civil War is Caesar’s attempt at an explanation of the war that changed the Roman world.

What listeners say about The Civil War

Without context I would not recommend this short book, its quite detailed in ancient rome around the time of the civil war after the gallic wars.

Excellent reading of a classic.

What made the experience of listening to The Civil War the most enjoyable?

I've enjoyed reading Caesar's works for decades. This let me revisit it while on the road and puttering at various tasks around the house. It is a story I'll return to.

What other book might you compare The Civil War to and why?

The obvious example is the Gallic War by Caesar. It is also a well told story written by a major participant. Like this one, it's entertaining to look for Caesar's self aggrandizement, though he hides it well.

Have you listened to any of Robin Field’s other performances before? How does this one compare?

I chose this version of Caesar because of Robin Field's reading. Once again he makes me feel that I'm listening to the author. I'll be looking for more of his work.

Caesar's generosity to his opponents, particularly to the legionaries, but also to their commanders, is a stark contrast to the massacres of his followers by those same opponents. Undoubtedly there's some exaggeration on his part, but his popularity with the common Roman soldier and man in the street is more understandable from seeing his approach to the conflict.

Caesar’s Civil War covers the period in Roman history from 49 to 48 B.C. The book primarily covers Caesar and his rival Pompey. I was disappointed in the book as I expected this to be a first person account as Julius Caesar was the author. But it is written in the second person more like a textbook. Maybe this is the fault of the translation from Latin to English. The book goes into Caesar’s role as Governor of Gaul; Caesar presents himself as the victim of a conspiracy occurring in Rome led by Pompey and Marcus Cicero. On 10 January 49 B.C. leading only one legion General Julius Caesar crossed the Rubicon River the boundary between Gaul and Italy proper, a legally proscribed action forbidden to an Army-leading Roman General. Thus began the Civil War. Caesar marched on Rome and Pompey fled Rome to central Italy. The book covers the battles but also the battles of Spain, Greece and African campaigns. The descriptions of the lay of the land as related to strategic advantages for battle were interesting. I was surprised at Caesar leniency toward the defeated solders. This was an interesting book but I was disappointed there was not more personal insight by Caesar. Robin Field did a good job narrating the book.