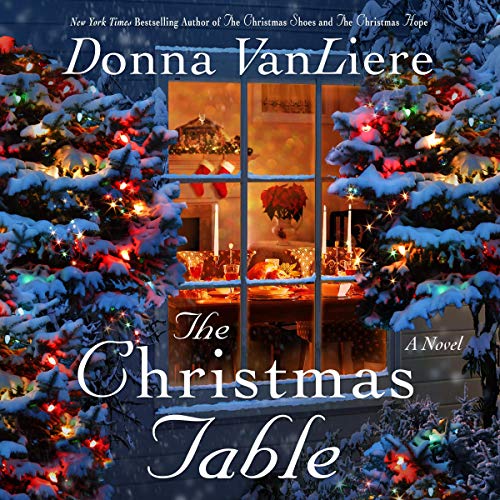 From Donna VanLiere, the New York Times best-selling author of The Christmas Hope series comes another heartwarming, inspirational story for the holidays, The Christmas Table.

In June 1972, John Creighton determines to build his wife Joan a kitchen table. His largest project to date had been picture frames but he promises to have the table ready for Thanksgiving dinner. Inspired to put something delicious on the table, Joan turns to her mother's recipes she had given to Joan when she and John married.

In June 2012, Lauren Mabrey discovers she's pregnant. Gloria, Miriam, and the rest of her friends at Glory’s Place begin to pitch in, helping Lauren prepare their home for the baby. On a visit to the local furniture builder, Lauren finds a table that he bought at a garage sale but has recently refinished. Once home, a drawer is discovered under the table which contains a stack of recipe cards. Growing up in one foster home after another, Lauren never learned to cook and is fascinated as she reads through the cards. Personal notes have been written on each one from the mother to her daughter and time and again Lauren wonders where they lived, when they lived, and in a strange way, she feels connected to this mother and her daughter and wants to make the mother proud.

The story continues to from 1972 to 2012 as Joan battles breast cancer and Lauren learns to cook, preparing for the baby’s arrival. As Christmas nears, can Lauren unlock the mystery of the table, and find the peace she's always longed for?

What listeners say about The Christmas Table

I don’t know how Donna does it!

I have always been impressed with the way Donna VanLiere is able to weave such a rich story with so few words. I have loved every one of her stories and and this one is no exception. And the fact that she is one of the best narrators I have ever heard is a bonus!

Our family has fallen in love with Donna's Christmas stories!! We listen to at least one (often several) each holiday season. This story didn't disappoint. Great story, great characters, and uplifting holiday emphasis. Thanks Donna for another great addition to our collection! Keep them coming!!!

I loved this book. It was about real life challenges and how prayers really work.

Another wonderful book by Donna Vanliere . Thanks

I love this book. Thank you so much. Lovely story as always by Donna Vanliere .

Loved it! Stunning conclusion to Lauren's story....God is whispering throughout this story..."Today is the day". VanLiere does not disappoint...narration is wonderful. The table is ready! Love the recipes at the end! After I cried....I will cook....What a way to be inspired into the Christmas season of Joy!

such an amazing story!

I've read all of her books in this series. I love them all. I will have to say. For me this is the best. I don't think I cried as much or laughed as much in the other's. The comic relief is so refreshing throughout the book. I especially love the banter between Glory and Merium. This book will make you laugh and cry. The story stays strong from beginning to end. Also, I can't wait to try some if these recipes.

A true reminder of what Christmas is about!

This was a very interesting story that kept me captivated! Have a box of Kleenex nearby!!!

I have read all of Donnas Christmas books. Wonderful inspiring page turners. Read by the Author who does an excellent job.