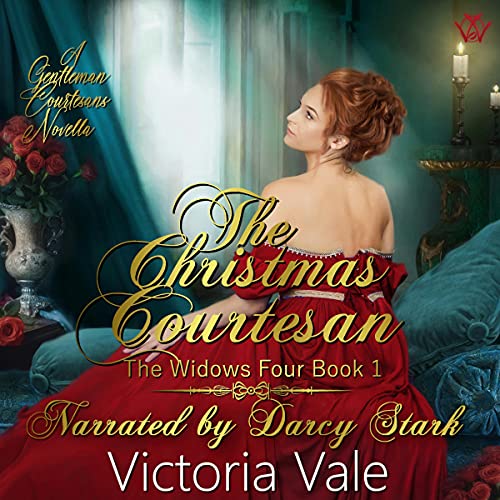 By: Victoria Vale
Narrated by: Darcy Stark
Try for £0.00

The Widows Four is a stand-alone tie-in series to the scintillating Gentleman Courtesans by Victoria Vale.

Widowed Lady Miranda Hughes wants to indulge in something wicked - something she might never have dared to do as a young, unwed debutante. The rumors of male courtesans operating secretly in London have piqued her interest, so she hires one for an illicit rendezvous during a Christmas house party.

Roger Thornton’s desperation to provide a dowry for his sister pushes him to moonlight as a secret courtesan. What begins as a convenient affair blossoms into more as Roger and Miranda find in one another the things they have been missing. But will a scandalous discovery ruin their chances for a happy future?

Previously published as part of the holiday anthology, Have Yourself a Merry Little Scandal. This stand-alone version has been republished with a bonus epilogue!

What listeners say about The Christmas Courtesan

A courtesan for Christmas? Yes, please!

I am a massive fan of Victoria Vale and she hasn't let me down so far. I have read this book before and I loved it so much that I have signed up for reviewing the audio book. I think Roger is one of my favourite VV characters because he's sweet, strong, responsible and handsome, and his stammer makes him even more likeable. Miranda is the perfect lady for Roger with her understanding, patient and clever personality. If you're familiar with Victoria's work, then you know what to expect, namely scorching hot scenes and being afraid of combust on the spot whilst reading, so make sure to have a fire extinguisher nearby when you're listening to this book.

Darcy and Victoria does it again!

Lovely short story to give you some Christmas cheer. If you love the courtesan series then this is a special one for you. This is much inline with the usual courtesan story and, as usual, read by the expert voice actor, Darcy Stark. Victoria Vale and Darcy Stark, the story and the narrator, equals one very enjoyable story!

A delightful and unusual Novella! 5*

This story is about Miranda, a widow, who is tempted by a friend to find out about a secret male courtesan business and she is intrigued!

Roger, the courtesan, is unusual insofar as not only is he a virgin but he has a stammer for which he is deeply ashamed.

This book is beautifully written.  I really felt for Roger, having a speech impediment myself, and the author conveyed the anxiety perfectly.

Miranda is a very sympathetic character and it is a delight to watch their love bloom; and watching Roger learning to trust and speak without fear.

I'm not one generally for epilogues but this was again lovely and added even more depth to the story.

I can't wait for the next story!

Darcy Stark' narration was excellent and got Roger's stammer perfectly.

I received an ARC of this book by the author but my opinions are entirely  my own.

Though it wasn’t a love match, Lady Miranda Hughes had a cordial relationship with her late husband, and she misses certain more physical aspects of marriage. With her friends bringing news of rumored male courtesans available in London, Miranda decides to throw caution to the wind and secure one for a discreet affair during a Christmas house party.

Since his titled older brother has been in charge of the family’s finances, Roger Thornton has been cleaning up his messes and now is no different. With his sister’s dowry lost and a suitor in the wings, Roger needs funds fast and becoming a courtesan is the most expedient means he can think of. Roger and Miranda are well-matched from the start and their union rapidly becomes more than just a superficial affair, but when they are less than discreet, the scandal could cast a shadow on their chances to become more.

This was such a quick and delightful read! Darcy Stark’s narration drew me into the story so well and made Roger’s struggle with his speech impediment all the more real and made me want to bring him comfort myself. I loved that Miranda was a rather open-minded heroine and willing to give Roger a chance without making too many assumptions. The relationship between these two progressed very quickly but given their very clear chemistry, that worked and made perfect sense here. I thoroughly enjoyed this novella; it was well worth the listen, and I look forward to the next book.

I voluntarily read and reviewed an audio advanced copy of this book. All thoughts and opinions are my own.

Now this is what I call a story wth a difference! Absolutely Brilliant!
It is well written, passionate and very easy to read with two really believable and well matched main characters in Roger, the Courtesan and Miranda, the Widow. The romancing is so warm and compassionate and the characters are just adorable.
I loved the whole package so much!
I have now read the book twice and just finished listening to the audiobook narrated by Darcy Stark and his interpretation and voices have just simply blown my mind away.
I am very eager to read/listen to the rest of this series and am definitely recommending either version.
This is an awesome paring of a brilliant author and a professional narrator.
I received a review copy from the author and my voluntary review above is based on my own interpretation of it.

First of all, I love Victoria Vale! All of her books are 5 Stars ⭐️
Lady Miranda a widow with a lovely young daughter finds herself a courtesan. And I love Roger her courtesan, he is handsome and a bit shy with a few secrets. They meet at a Christmas dinner party in the country.
Such a fun, beautiful and hot storyline ♥️🔥❤️ They we’re made for each other, but of course nothing is perfect and smooth in a relationship!
This is a definite must listen, it’s a standalone and I loved Darcy’s performance as always.

This story really touched my heart. Roger becomes a Courtesean to restore his sister’s dowry. Victoria gives us a story we so much emotion. Roger was embarrassed about his affliction (don’t want to ruin it for other readers) but Miranda showed him it was nothing to be shy about. I loved how he was with her little daughter. Victoria’s books always give me all the feels...emotion, smiles, friendships, heat. I love that I can listen to this story and escape into the world Victoria creates. I've had a touch few months and I listen to this story and it's my "down time"

After a conversation with a group of her friends, Widowed Lady Miranda Hughes decides that perhaps hiring a gentleman courtesan would help ease her loneliness. She loves and enjoys being with her sweet daughter, but misses having the company of a man. Roger Thornton finds himself in the precarious position of replacing his sister’s dowry when his irresponsible brother, the Viscount, loses it on a bad investment. When a friend suggests he earn the money he needs as a gentleman courtesan, he is hesitant, but decides it is worth a try. Miranda and Roger will meet at a house party to begin their affair. After an awkward meeting, they have a wonderful time. Roger has a stammer that causes shyness, to the point that he is still a virgin. Miranda is understanding, patient, and tender with him. The chemistry is hot and the attraction strong. It looks like these two may be headed for a real future, but then his brother butts in. What to do? Poignant story, fantastic hero and heroine, splendid narration by Darcy Stark. An enjoyable listen.

I love this story. The Christmas Courtesan was a wonderful getaway from the real word; it was engaging, intriguing, and emotional. Normally, I would gush over the female character but Roger Thornton was great. He is what I would call a beta male and I love how Ms. Vale wrote his story. The narrator help us feel his sadness and longing for more in life but feeling he couldn't obtain it because of an impediment. Even though it was a novella, the author was able to create nuances with each character and flesh them out without me as a reader feeling like she left something out of the story or feeling like she rushed it. Great story, great narration. I'm ready for book 2.

I loved this Audible with surprises & romance!!!

I enjoyed this read with its surprises, twist & turns & of course romance. the main characters were absolutely enchanting & so in love! the storyline executed perfectly. this is what I call a feel good story all is not perfect but love proves it doesn't have to be... as long as it's perfect to you... & it was!!! And I want more!!!
I was gifted this Audible as an ARC & this is my voluntary & honest review...

Victoria Vale does it again! I have loved all of the Gentleman Courtesans and this spin off is starting out just as good as the others. I don't know what it is about Ms Vale's books but I find it so easy to connect with her characters. Roger is flawed but incredibly sweet and easy to love. Miranda is also great and her daughter is adorable. I love characters who already have children.

Darcy Stark does a wonderful job telling this story.

I found this novella length romance quite delightful. This is the type of book that I feel can blindside you with the powerful emotional punch that it has packed in a small package. Miranda and Roger were wonderful characters and so easy to fall for. This couple delivers plenty of feels and swoon as their story unfolds. Expect lots of emotion along with some drama, angst, heat and an abundance of heart as the engaging and entertaining story unfolds. Single narration on this book and I found the narrators voice pleasing and easy to listen to.