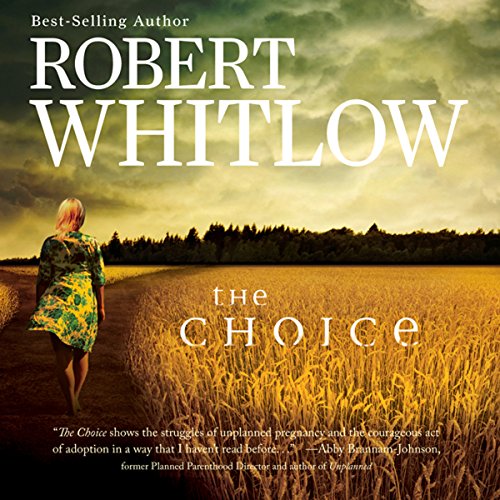 By: Robert Whitlow
Narrated by: Heath McClure
Try for £0.00

One young woman. Two very different roads. The choice will change everything.

Even as a pregnant, unwed teen in 1974, Sandy Lincoln wanted to do the right thing. But when an ageless woman approached her in a convenience store with a mysterious prophecy and a warning, doing the right thing became even more unclear. She made the best choice she could...and has lived with the consequences.

More than 30 years later, a pregnant teen has come into her life, and Sandy’s long-ago decision has come back to haunt her. The stakes rise quickly, leaving Sandy with split seconds to choose once more. But will her choice decision bring life... or death?

" The Choice shows the struggles of unplanned pregnancy and the courageous act of adoption in a way that I haven't read before...." (Abby Brannam-Johnson, former Planned Parenthood Director and author of Unplanned)

What listeners say about The Choice

this is a well written thought provoking story which is really let down by the narrator. it was just read not performed, by that I mean there were no voices for the characters to differentiate who was speaking.
the book should have been performed by a female to make it a five star listen.

Great Twist in this story

Would you listen to The Choice again? Why?

I'm not a fan of the narrator. However, I liked the story, it had a few good twists.

What was one of the most memorable moments of The Choice?

What aspect of Heath McClure’s performance would you have changed?

If you could rename The Choice, what would you call it?

Would you listen to The Choice again? Why?

No, the narration was the worst I have ever heard. It sounded like the narrator was reading to a 3 year old. There was no affectation and he read in a sing song rhythm.

Robert Whitlow is a great author - his stories always are filled with great story components. However, Heath McClure is one of the WORST narrators that I've ever heard.

Because I like Whitlow stories, I'll probably listen to the rest of his books - but I'm afraid I'll have to suffer through Heath McClure's reading.

McClure's narrating has almost no infection, no character variation, and hardly no feeling. I cannot understand why Whitlow chose this narrator for so many of his books.

Robert, if you want your books to be recommended, trash these audio versions and have them re-read by a REALLY GOOD narrator.

Really enjoyed listening to this book and the story that it entailed. Having never been able to have children and always being interested in adoption, I loved the feeling I received when listening to this story of hope and redemption.

What disappointed you about The Choice?

I really enjoy good Christian fiction, but after listening to over half of it, and spending a good bit of money, I give up! The narration is awful, and the story is lacking, in my opinion.

Has The Choice turned you off from other books in this genre?

Would you be willing to try another one of Heath McClure’s performances?

This is a great story.

I like the story's topic and found myself wiping a few tears. The narrator doesn't try to do characterization but has great expression and is easy to listen to..

Where does The Choice rank among all the audiobooks you’ve listened to so far?

The narration really takes away from the beauty of the story..

Sandy stood up for her convictions. She is a strong confident woman.

Who was the most memorable character of The Choice and why?

great story, narrator - not so much

If the story hadn't been so good, I would have given up on the narrator before the 5th chapter....

I really loved this book. I hated to have to stop listening!!! I really enjoyed the performer too!!! I loved everything about this book. I get everything the author writes!!