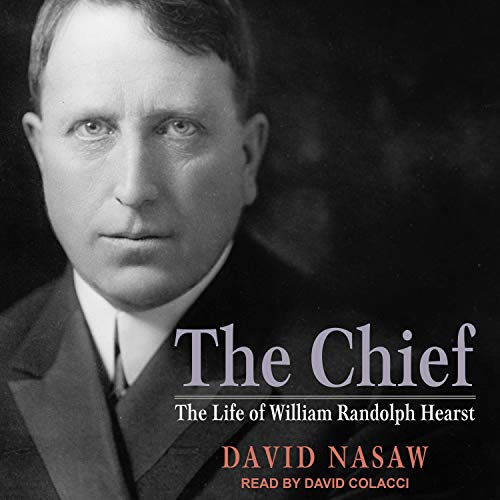 By: David Nasaw
Narrated by: David Colacci
Try for £0.00

William Randolph Hearst, known to his staff as the "Chief", was a brilliant business strategist and a man of prodigious appetites. By the 1930s, he controlled the largest publishing empire in the United States, including 28 newspapers, the Cosmopolitan Picture Studio, radio stations, and 13 magazines. He quickly learned how to use this media stronghold to achieve unprecedented political power.

The son of a gold miner, Hearst underwent a public metamorphosis from Harvard dropout to political kingmaker; from outspoken populist to opponent of the New Deal; and from citizen to congressman. In The Chief, David Nasaw presents an intimate portrait of the man famously characterized in the classic film Citizen Kane.

With unprecedented access to Hearst's personal and business papers, Nasaw details Heart's relationship with his wife, Millicent, and his romance with Marion Davies; his interactions with Hitler, Mussolini, Churchill, and every American president from Grover Cleveland to Franklin Roosevelt; and his acquaintance with movie giants such as Louis B. Mayer, Jack Warner, and Irving Thalberg. An "absorbing, sympathetic portrait of an American original," The Chief sheds light on the private life of a very public man (Chicago Tribune).

What listeners say about The Chief

This book in epic. The writing is outstanding and the story being told is as large and encapsulating as you would imagine. I would highly recommend it to anyone that is into history and larger than life people.

Really well done. It is hard to fathom the life lived by this man. The connection to history, politicians, Hollywood and so forth are amazing. Story is well told and the pace is great.

I’m not into Hollywood at all but this book touches on the early days so, if you like that stuff, this will be of interest.