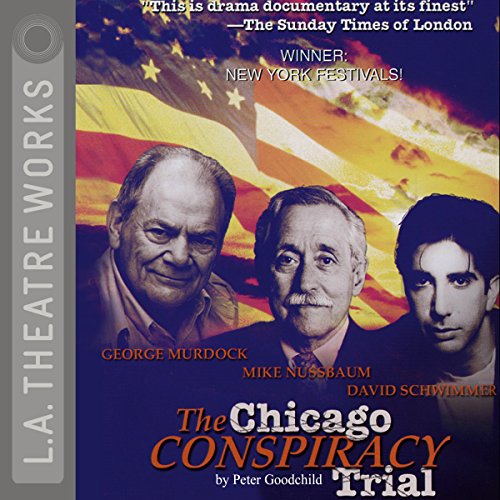 David Schwimmer (Friends) and George Murdock (Barney Miller, Battlestar Gallactica, Star Trek) head the L.A. Theatre Works presentation of Peter Goodchild’s adaptation from court transcripts of the reality-is-much-stranger-than-fiction that passed as the famous 1969 trial of "The Chicago Eight". That prosecution of the men accused of inciting the riots surrounding the 1968 Democratic Convention in Chicago featured the most colorful cast of characters, controversies, and proceedings in America’s, if not the world’s, judicial history. Its recreation, however, is not just history, but also commentary, comedy, and drama.

Reality is stranger than fiction when seven 1960s radicals refuse to behave in Judge Julius Hoffman's courtroom. Based on actual trial transcripts and starring a cast of top Chicago actors, this play centers on events following the protests and riots during the 1968 Democratic Convention in Chicago.

Outstanding work that gives a sense of the time

This 2-hour abridgement of the run-up to the Chicago-7 trial & pieces of the trial transcript is an outstanding work of theatre that brings the listener into the actual events in a way no other medium or text could. The story is woven in such a way that you get the sense of what it was like to be in the courtroom ... as part of the prosecution team, the defense team & defendants, the judge & the jury, since all of those points-of-view are represented. The material has a slight pro-defendant bias, in part because it evaluates the event from a politico-historical perspective, rather than a narrow legal perspective. But that slight bias is clear in the telling & should just be in the back of listeners' minds as they listen. This is the best of the three "trial" audios by the LA Theatre Workshop (the others are on the Scopes & the Pentagon Papers cases), because it is the longest & the one most focused on what happened in the courtroom itself. Well worth the money.