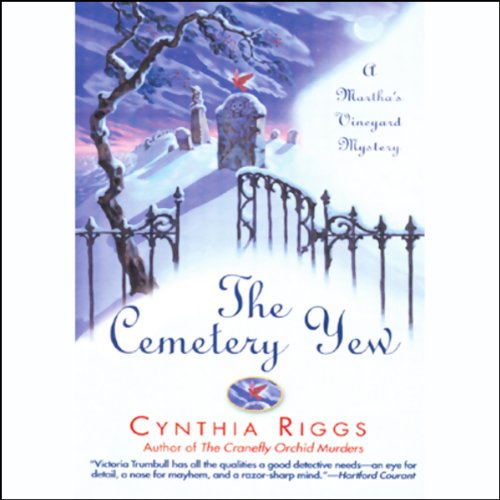 By: Cynthia Riggs
Narrated by: Davina Porter
Try for £0.00

There's more than one reason why the new West Tisbury police chief officially made 92-year-old Victoria Trumbull her deputy. For one thing, Victoria knows just about everything about everyone in Martha's Vineyard, not to mention their ancestors. She may be 92, but she is as sharp and as sharp-eyed as the proverbial tack. So when Victoria is the only one who spots something amiss among the gravestones of the West Tisbury cemetery, it's no surprise that the police chief listens.

Something is indeed amiss. A request comes from presumed relatives in the Midwest to disinter a coffin for reburying elsewhere. Things go wrong from there. When, as a last measure, the coffin is found, dug up, and opened, it does not contain the expected body. Then the coffin itself disappears.

"With patience and charm, the down-to-earth Victoria succeeds in drawing out confidences. In the end, even she is surprised." (Publishers Weekly)
"Can a 92-year-old protagonist engage readers of all ages? Definitely....As satisfying as a steaming bowl of chowder on a cold New England evening." (Booklist)

What listeners say about The Cemetery Yew

Victoria solves another one

I'm becoming very fond of Victoria Trumbal & her intimate knowledge of Martha's Vineyard. The ending of this one was a real surprise!! Although the action is much gentler & slower than most of the Thrillers/Murders I usually like, Victoria has stolen my listening heart. A good listen for anyone who likes some local lore mixed with mayhem.

Do it in America

I am so sorry about this book but if you're going to do a story about Martha's Vineyard or anything off the coast, or on American soil you should at least have a narrator that speaks American, this British accent and the boring monotone was just a little too much to go through
I think the story would have been so much better if the ending was at least tolerable, Try it for yourself. Maybe your ears can help you like it.

I was hoping to really like these characters since I love to find a series I enjoy. It was OK, but it doesn't make me want to read or listen to more of these.

I've always enjoyed a great mystery and this was surely one. I think the characters are really interesting and some are surprisingly funny. This was another good book by Cynthia Riggs. Hope she keeps up the great work.

These Martha's Vineyard Mysteries are addicting. 😉 And Victoria Trumbull is the best deputy policeman around, even if she is 92 years old and set in her ways. The case of the missing coffin is just so good, and following the investigation and each suspect until the conclusion made for great fun. The end was just perfect.

A good story. I do not feel it was not quite as good as previous books

Interesting plot premise -- then -- just listening to people squabble. Clearly, some people like this. I don't.

Ideallistic view of a small community

I love women sleuths, especially older ones, and I adore Davina Porter as reader.
In this book, the first I read, but not the first in this series, the protagonist didn't strike me as extraordinary so much as the police chief as rather not extraordinary. But I liked the writing style and the descriptions of the land and the weather.
It will not give your brain a big work-out but rather transport you elsewhere for a couple of hours.
I'll definitely try another book of this series, although right now I am not sure I'll commit to reading all of them.