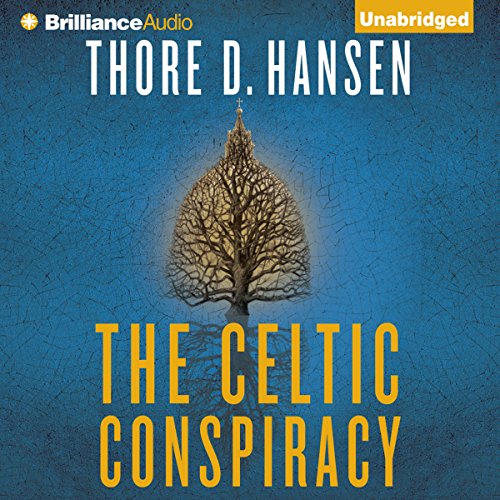 In the final days of World War II, an Irish soldier discovers a cache of artifacts in an Austrian cave that threatens to expose a long-buried secret of the Catholic Church. The artifacts prove that the Druids of Ireland did not die out; they were systematically exterminated in cold blood. However, the secret will stay buried within the walls of the soldier’s home for another 50 years before it is brought to light by his son, a modern-day proponent of the Druids’ enlightened, pacifist culture.

Armed with the evidence and the conviction to expose the Church's conspiracy, the soldier's son forms an unlikely alliance with a healer, a linguist, a Washington attorney, and a Supreme Court justice to bring the Vatican to trial. As the action races from the corridors of the White House and the United States Supreme Court to Dublin’s halls of academia and the secretive back passages in Rome, the Church will stop at nothing to silence the voices of the past.

I had high hopes for this one, having read most everything (fictional and nonfiction) about the celts and the druids that I can find. Alas, this did not measure up to expectations. There was a good premise here, and for that reason it should have been named "The Catholic Conspiracy" as it attacked the Catholic church, not the celts. I am no fan of the church, but neither do I like to be preached at, no matter the source. This was proseletysing in the guise of fiction, with a very thin story line that didn't hold up. (No character development, no identification with any characters, little plot, etc.) Even with this, I might have enjoyed it, except for the truly ranting tone (which the reader conveys nicely).
Really!
Much of the author's historical information is pretty accurate (though his contemporary settings are definitely not accurate: i.e. the CIA does not guard the U.S. embassies; that would be the marines). But the self-righteous preachiness I found just too much. Too bad. I recommend saving the credit.

I would have enjoyed more historical information about the Druids and Celtic culture and less of the far fetched political intrigue.

I really enjoyed this one...

Interesting ( although abit out there, and certainly not a book for avid Catholics, or followers of the Pope ) concept, with enough character interest to keep your attention.

I am not always one for performers to emulate different accents and genders, but this one worked well for me.

The conclusion is quite a stretch, but the overall tone, and delivery of both the story and the performance are worth investing in, esp. if you enjoy the "Catholic Church conspiracy " branch of suspense books.