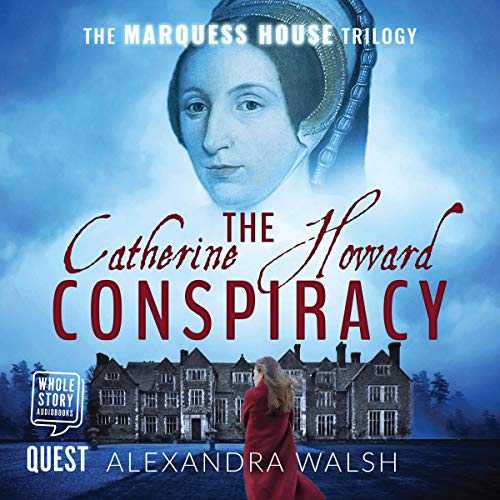 By: Alexandra Walsh
Narrated by: Emma Gregory
Try for £0.00

The Catherine Howard Conspiracy is the first audiobook in the Marquess House trilogy, a gripping dual time line conspiracy thriller with an ingenious twist on Tudor history. Perfect for fans of Dan Brown, Philippa Gregory and Kate Mosse.

When Catherine Howard arrives at the court of King Henry VIII to be a maid of honour of the new queen, Anne of Cleves, she has no idea of the fate that awaits her. Catching the king’s fancy, she finds herself caught up in her uncle’s ambition to get a Howard heir to the throne.

Meanwhile, in 2018, Dr Perdita Rivers receives news of the death of her estranged grandmother, renowned Tudor historian Mary Fitzroy. Journeying to her grandmother’s vast estate in Pembrokeshire, Perdita is drawn into the mystery of an ancient document in the archives of Marquess House, a collection of letters that claim the records of Catherine Howard’s execution were falsified....

What truths are hiding in Marquess House? And how was Perdita’s grandmother connected to it all?

What listeners say about The Catherine Howard Conspiracy

This book got me walking again.....

I couldn’t wait to get up and out for my morning walk while listening to this story. An extra hour each morning in the early morning sun, birdsong and a riveting story. I’ve loved every minute of it. Plausible enough to be believable, that’s the art of a storyteller and I’ve been itching to get back to it every opportunity I’ve had. Using the Audible option meant I could still do other things while listening, so I’ve been sewing, walking, working, researching - all while listening to The Catherine Howard Conspiracy.
I can’t wait to start the second book in the trilogy. It’s a clever concept, with enough belief written in the pages to keep me hooked. Pure Historians might get sniffy about the concepts, but I don’t see why. I loved Enid Blyton as a kid, and never once was I told that there were no such thing as Fairies at the bottom of the garden. I was allowed to set my imagination fee, and that’s exactly what this book has allowed me to do too. I’ve really, really enjoyed it.

The concept of the story was good however at times I felt the portrayal of the historical figures were over stretched in terms of their characters. Henry the Eighth for example this story is a hypothesis taken to the limit which spoilt it for me some time subtle suggestions make a deeper impression of what may have happened. It does make you think. But I soon grew tired of the extremes. The narrator was first class so much so I will definitely look out for her in the future. Would I recommend? If you know your Tudor history you may find this very irritating indeed. And I have to admit this was me and I didn’t finish the book.

I'm so in awe of this novel, the story is so clever and the ideas a twists are amazing. I cannot wait for book 2 to arrive. I will read this over and over, I think I have a new favourite author in Alexandra Walsh and look forward to many years of reading and audio from her.

Started off very skeptical about the whole idea. It's complete tosh, the plot is obvious within the first few pages, and the same phrases keep being repeated through out but it's surprisingly addictive! Even bought the second book instead of waiting for my next credit! Give it a go, you may be surprised.

I loved this book, I too love history and like to think what if...

This has inspired me thank you.

Taking sure an established story as Queen consort Kathryn Howard and making her more 3D and in-depth. A teenage girls hopes and desires, whatever the generation, and following those into womanhood in an age where being an independent, clever or ambitious woman wasn’t or hasn’t been shown to be a good thing. History keeps throwing up contradictions and we should never stop being open to things could have been different than what we have been led to believe. When history is written by the victor, there is only one side of the story, and I always want more.

A brilliant story. I generally don't like any story that makes reference to the modern day world, I would rather loose myself in History. However, this story has had me gripped from the start. Yes, it flips from the modern day to history and back again, but don't let this put you off. It is worth ever minute and I was sad when it had finished. Narrator, Emma Gregory is fabulous. Author, Alexandra Walsh I will definitely find more to read and listen to.

I really enjoyed this book. It was an interesting look at an alternative to traditional history. Loved the two time period sections in the book.

Not my usual type of book but thought it worth a go. The present day part of the book was pretty ordinary and the plot a bit obvious. The story within the story was not very well written and was very simplistic, a bit like a child's book although the subject matter was adult.
It may make be better read than listen but I did wish I had not bothered!

Can't get enough of Emma Gregory

I really enjoyed this. Two mysteries, separated by 500yrs. Intriguing twists and theories. Kept me interested throughout. Now moving onto the second of the trilogy.