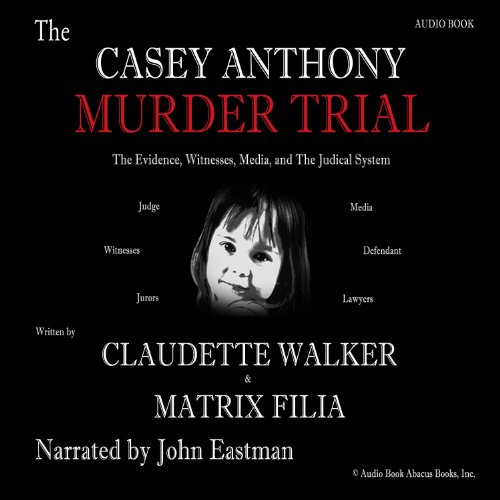 By: Claudette Walker,Matrix Filia
Narrated by: John Eastman
Try for £0.00

From sidebars to sideshows, this is The Casey Anthony Murder Trial.

The book is a comprehensive look at the media, judge, jury, defendant, lawyers, witnesses, and evidence, written with eyes wide open. This is what most people never see: the events that occur during a murder trial. With all the elements of an American tragedy, complete with the elevation of the mother to celebrity status, Casey Anthony stood accused of murdering her two-year-old daughter.

Caylee was last seen with her mother, and the toddler's disappearance went unreported for 31 days. A massive worldwide search ensued, before the discovery of Caylee's remains in a murky Florida swamp six months later. In the trial, both the lawyers and witnesses seemed to cross the lines between fact and fiction during this spectacle of horrors. The media covered the arrest of the mother, and for the first time an American jury selection was televised live, from our home in Pinellas County, Florida.

From jury selection to sentencing, this is a comprehensive interpretation of a first-degree murder trial and our American justice system, for good or bad. This is not a storybook, but the story of this trial, done in real time, including the observations and opinions of the two writers as the trial was ongoing.

We know this trial. The book examines the murder of Caylee, the trial of her mother, and takes a hard look at the judicial system. This trial and the acquittal of her mother for the murder have resulted in strong opinions, from agreement with the verdict to venomous hatred of all involved in the case and even those who write about this trial. Listen and judge for yourself.

No proceeds of this book go to Casey Anthony, her family or representatives.

What listeners say about The Casey Anthony Murder Trial

a book of short sentences

couldn't finish this book, it was read as if it was quick short sentences, it didn't run smoothly at all.
I was very disappointed as I would love to have heard the outcome of the case.

It was interesting and detailed. I was so disappointed that there was no huge revalation that lead to the jury's decision.

Narration was a bit of a bummer

Fascinating subject matter, very well presented. I enjoyed this audio book. My only criticism is that the narration was a bit stiff. Still, it was clear and well enunciated. I will not allow a less-than-stellar narration to effect my opinion of the writing, however. Very pleased with this purchase.

Jeff DOES in fact bring out never-before revealed info in this well-written and thoughtful book. He narrates it himself, and I felt strongly that this added a LOT to the effectiveness of the entire manuscript. He is witty, introspective, puts a balanced view to this whole complex case; and, I think, gives credit where it is due to major players in the case, and criticisms, well-deserved in my opinion, to those who did not play fair. It is a VERY entertaining read. I highly recommend this book!!

The book itself is great! Listening was like hearing a user manual being read out loud.

it was good but I often found it repeating portions unnecessarily. It was a bit hard to finish due to this.

Fastest Reader in the World

The fellow. Reading was going so fast I had to stopping. Slow the Hell Down

It was as though the narrator was reading straight off the queue cards. He had no expression or interest in the reading/ narrating of this title!

This Could be a Great Read, But It's Not

Would you listen to The Casey Anthony Murder Trial again? Why?

No Chance. I will read it again, but listen, no way. I purchased this book because it is written regarding the trial of Anthony, and I have never really understood how she was found not guilty. This is something I was truly looking forward to listening to in order to get answers. Unfortunately Eastman reads this book with no interest. In fact the way he reads this reminds me of how I read text books in high school. In other words, he reads with no inflection, no change in tone to indicate a change in speakers, and as quickly as possible to enunciate his words.

It is difficult to stay connected to the story because the reader invites you to let your attention wander. The next thing you know you have no idea who is speaking because there is absolutely no change in his voice between when he is explaining court procedure and when he is reading out the testimony of a witness.

I considered the idea that he was trying to keep from inferring any personal feelings. I considered he might have been trying to convey the dryness of a court room proceeding. No matter what excuses I make for the exceptionally poor narration of this book the bottom line is that I think the book might be great. Unfortunately I am finding it impossible to follow what's going on because the narrator gives no voice to the story.

What other book might you compare The Casey Anthony Murder Trial to and why?

Perhaps Helter Skelter would be a good comparison. Like this book it is focused primarily on the trial and the proceedings. Fortunately the narrator in that case was very good.

Having already described this at length above I will just say he reads as though he is not interested in the story.

If you could give The Casey Anthony Murder Trial a new subtitle, what would it be?

How to Get Away With Murder for Dummies.

I've listened to 2/3 of the book. I still can't believe they didn't find her guilty. Perhaps there is a shocking surprise in the last 1/3 that will change my mind. Perhaps in the mind numbing narration I missed something that would have caused me to find her not guilty. At this point in the book the pathologist is explaining the duct tape around the babies mouth and nose region. I'm still wondering how in the world these people established reasonable doubt in their minds...

The authors' very clear biases against Casey Anthony were obvious from the start. I wasn't interested in hearing the facts through their lenses, I wanted an unbiased perspective. If that's what you, the reader/listener, are looking for, look elsewhere.

If you watched the trial don’t buy this book. It’s literally a retelling if the trial with a terrible voice.