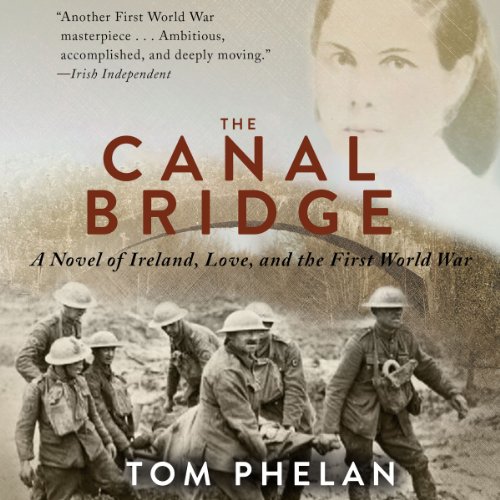 In 1913, before there is a rumor of war in Europe, Matthias Wrenn and Con Hatchel, lifelong friends from Ballyrannel in the Irish midlands, decide to see the world at the expense of the king of England and join the British army. A year later, while en route to India, their troop ship is recalled and they soon find themselves in the European slaughterhouse that was World War I. As stretcher bearers, the two men witness all too closely the horrors of the battlefield and the trenches, the savagery, and the unconscionable waste of human life on fields made liquid by “the blood and guts of boy soldiers” at the Somme, Ypres, and Passchendaele. Meanwhile, back home in Ireland, Con’s sister and Matthias’s lover, Kitty Hatchel, yearns for their safe return and reminds them of their carefree childhood on the banks of the local canal, as well as their hopes for the future.

Brilliantly and movingly narrated by a chorus of voices from the community — Matt, Con, Kitty, and others — The Canal Bridge tells the story of how the young men take Ballyrannel to war with them, and how the war comes back home when hostilities end in Europe. The Ireland the friends left in 1913 no longer exists, for the political landscape has been transformed by the Rising against the British in 1916. It is now a land riven with sectarian tensions and bloodshed from which there is no escape.

What listeners say about The Canal Bridge

A sad but compelling read.

Different style of writing, about two iris boys who join the British army and get involved in the First World War. The story is told from the personal perspective of several individuals in the story. The description of warfare in the trenches is realistic and compelling. The story describes life for the two boys before and after the war. It is sad and gave me a deeper perspective on WW1.

If I could, I'd have given it a thousand stars.

The wonderful words of Tom Phelan beautifully spoken by Paul Nugent. A captivating story vividly painted by the narration.

Loved the connection between all the characters.
I was transported back in time by the great story telling,
I laughed & I cried, I would recommend this to anyone who’s relative fought in WW1, add to that the difficulties of going home to Ireland during a time of great change, I couldn’t stop listening.

I read Lies the Mushroom Pickers Told with my husband on a previous car trip. We laughed and thoroughly enjoyed it. So I took a chance on this book. Phelan is a master storyteller, right up there with Frank Delaney and a few others. The story is told from multiple viewpoints and goes back and forth in time. Yet this ultimately works. Each character is finely crafted and becomes someone you love or loathe.

There is a realism about the war which is upsetting and sometimes nauseating. Yet it is not done for sensationalism. Phelan tells of the horror of war for the young men and women who lived and died because of the stupid decisions of their superiors. It is painful, and at times I wanted to stop listening. I could not do that; the book was so riveting. If you have trouble keeping many characters straight you may not like this book, but we both loved it. I can't get it out of my mind, nor can my husband. We both agreed that there is an innocence that the main characters maintain throughout in spite of what they have experienced. We got a different take on the Irish uprising of 1916 from this book. Compared to the horror of France and Belgium, that was a lark in the park.

Paul Nugent was such a phenomenal narrator that I'm looking for books he has narrated. He differentiated between characters, doing a terrified Kitty at 17, applying for a job at the big frarm, to an officious general in the British army. There were Cockney, Welsh, Northern and midland Irish and more among the accents he did effortlessly. I am in awe of this guy! He can read to me any time! :)

Can you give a narrator more than five stars?

I noticed the novel in a bookstore and was happy to see it featured on Audible and happier still once I started listening. Mr Phelan is a wonderful storyteller. One could almost picture themself walking along the canal in Ballyrannel. The character development is solid. Paul Nugent's narration is fantastic.

Hope that some of Tom Phelan's other books make their way to Audible.

If you could sum up The Canal Bridge in three words, what would they be?

This beautifully written novel presented a part of Irish history that until recent years seemed to have been greatly de-emphasized...the fact that hundreds of thousands of Irish men fought in WWI, serving in the British army and fighting the Germans. Yet while they were in the trenches, a much smaller number of men rebelled against the Brits in Dublin and their proclamation claimed they were supported by "gallant allies"--the Germans.

Which character – as performed by Paul Nugent – was your favorite?

Enjoyable and interesting story told from a unique perspective of WWI. At times, the use of multiple points of view for narration was distracting, particularly with a few chapters that seemed unrelated to what was presently occurring within the plot. The pieces also seemed to jump around in time rather than following exact chronology.

Paul Nugent is a genius

I don’t even know where to begin. Tom Phelan’s writing is so gorgeous and transportative, it is only matched by Paul Nugent’s artistry in being so many characters at once. I wished it would never end. Even with how gut wrenching the story is. I am excited to read everything else Tom has on offer and hoping to listen to anything Paul has read.

The narrative lifts you away from the present and transports you back 100 years. Every word, performed so beautifully by Paul Nugent, awakens every sense and emotion. The dinner was late, the laundry forgotten, my husband huffy and brooding, and the kids left to text and surf to their heart's content while I shamelessly immersed myself in The Canal Bridge uninterrupted (not for want of trying) from first word to last. What more can I say?