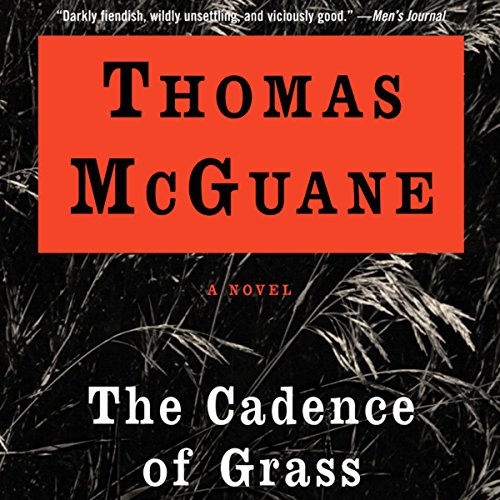 The Cadence of Grass

By: Thomas McGuane
Narrated by: Victor Bevine
Try for £0.00

Sunny Jim Whitelaw, a descendent of pioneers and owner of a large bottling plant, may have died, but he has no intention of relinquishing control: his will specifies that no one gets a cent unless his daughter, Evelyn, reconciles with her estranged husband, Paul. But Evelyn is a strong-willed woman, fiercely attached to the land, whose horses transport her to a West she feels is disappearing, while Paul is a suave manipulator, without scruples, intent on living well.

As played out on the majestic stage of Montana cattle country, the ensuing drama involves blood, money, sex, vengeance, and a cross-dressing rancher. The Cadence of Grass is renewed evidence that McGuane is one of the finest writers we have, capable of simultaneously burnishing and demolishing the mythology of the West while doing rope tricks with the English language.

"McGuane's sentences are like no one else's, crisp and spare, yet somehow baroque, and he perpetually balances the picaresque against the sublime." (The New Yorker)
"A fine, quirky, funny, startling novel.... with witty dialogue and hilarious moments and sudden violence and awful betrayals." (Miami Herald)
"[D]arkly fiendish, wildly unsettling, and viciously good." (Men’s Journal)

What listeners say about The Cadence of Grass