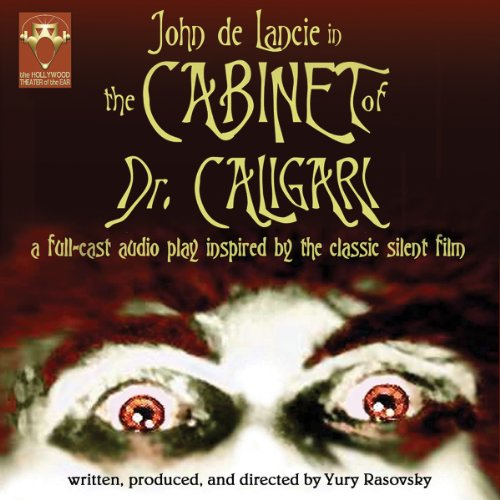 The Cabinet of Dr. Caligari

By: Yuri Rasovsky
Narrated by: full cast
Try for £0.00

Inspired by the classic silent film of 1919, this original audio play won the Independent Publishers Award in 1998 for best direct¿to-audio production. John De Lancie stars as a young poet who visits a fair one night with his friend and girlfriend. Entering Doctor Caligari¿s tent, they meet the mysterious Cesare, a kind of zombie, who is neither alive nor dead¿and who forecasts doom for our high-strung protagonist and his friends.

Combining the directness of an old-time radio play and the language and themes of high psychological drama, this unique production was written, produced and directed by Peabody and Audie award-winner Yuri Rasovsky and features a superb cast.

What listeners say about The Cabinet of Dr. Caligari

good story with a top-notch cast. I loved the voices of the Doctor and the dead guy.

I purchased this looking for a nice diversion, and was sorely disappointed. The audio quality is terrible - there is no equalization of volume among voices, which makes it annoying to listen to. I had to keep turning it up and down to even hear what was taking place, which meant that my ears were blown out when characters screamed (which seems altogether too often).

Even worse, though the play is clearly set in Germany, the character accents are all 19th-century English, making for a particularly jarring performance.

Save yourself the time and pain.

I have to disagree with the other review posted here. The audio quality was just fine, and the whole production seemed very professional and well done to me. Perhaps it has been enhanced since the other review - not sure. In any case, I disagree with that assessment of the sound quality. Though it is true the accents don't seem right for the setting of the story, I think that is being overly pickym since the actors do a good job and are convincing. This story may not be everyone's cup of tea, butit isn't the terrible mess the other review makes out - at least not in my opinion.

I thought the story was interesting too and as a short story, found it entertaining.